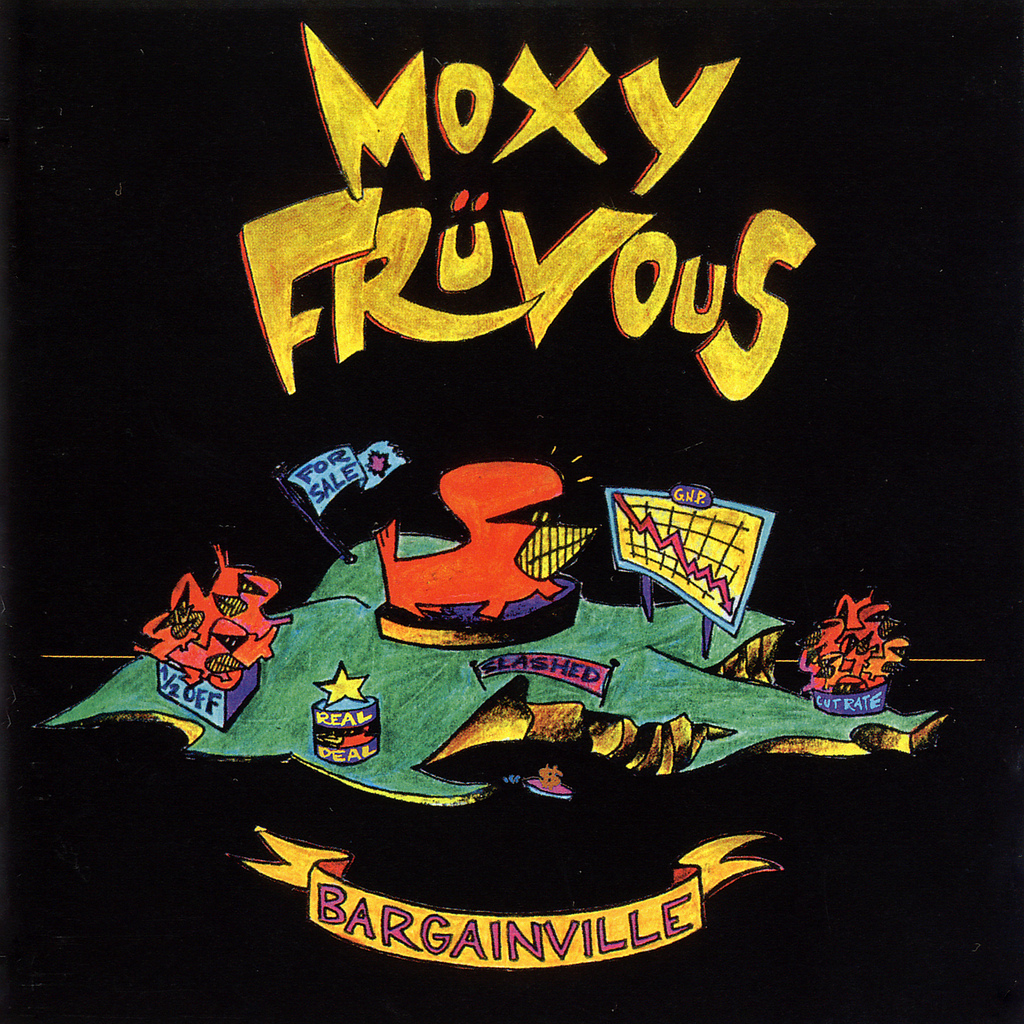 Jian Ghomeshi (vocals, drums, percussion, tin whistle), Mike Ford (vocals, guitar, percussion, piano), Murray Foster (vocals, bass) and David Matheson (vocals, guitar, piano, accordion) attended Thornlea Secondary School together in the 1980s. Ghomeshi and Foster were in a new wave band called Tall New Buildings, which released two EPs before disbanding. They then formed a cover band with Ford called The Chia Pets before evolving into Moxy Früvous with Matheson. The group provided various irreverent explanations for its name over the years, although Ghomeshi said in a 1999 interview that the group tried “to think of a name that wasn't easy to remember and didn't mean anything," since that was the opposite of what bands normally do.

The group started busking at Toronto’s Harbourfront Centre and in front of the Bloor Cinema, eventually drawing crowds in the hundreds. These energetic performances, which emphasized four-part harmonies and clever, often improvised lyrics, caught the attention of a CBC Radio producer who enlisted Moxy Früvous to perform on the drive-time program Later the Same Day. The band made regular appearances and was commissioned to write satirical numbers about local issues. This resulted in “My Baby Loves a Bunch of Authors” (written for the International Festival of Authors) and “The Gulf War Song,” which both appeared on the band’s self-titled and independently produced cassette released in 1992.

Showcasing the band’s largely acoustic, barbershop-quartet-meets-comedy-novelty-act sound, the indie cassette went on to sell more than 50,000 copies in Canada. Moxy Früvous received significant radio play for songs like the mirthful “King of Spain,” and garnered a CASBY Award for Favourite New Group from Toronto radio station CFNY. The quartet toured across Canada on its own and opened for the likes of Bob Dylan, Barenaked Ladies, They Might Be Giants and Bryan Adams.

The success of the cassette created a record company bidding war for Moxy Früvous that was won by Warner Music Canada and included US distribution through Atlantic Records. The first release as part of the five-album deal was the platinum certified Bargainville (1993), a 15-track album that included five of the six songs from the debut, along with new numbers such as “Fell in Love” and the top 10 single “Stuck in the 90s,” and more eclectic oddities like the Spiderman theme.

Moxy Früvous toured across Canada, the US and Europe before releasing its next album, Wood (1995), a more subdued and serious record that featured greater instrumentation and more personal lyrics. It didn’t enjoy the same success, wasn’t released in the US and ended the band’s association with Atlantic. The ‘b’ Album, a collection of B-sides and rarities, was released independently in March 1996 and by Warner Canada four months later. You Will Go to the Moon (1997), which introduced a more experimental sound with new instruments, followed the next year. It was picked up in the US by Bottom Line Records, which also issued Wood and The ‘b’ Album stateside in 1998.

Moxy Früvous continued to tour heavily. Its live performances became the backbone of the band’s success and often featured them improvising material, switching instruments and engaging the audience in witty stage banter. The popularity of its concerts, which many hardcore fans, or “Frü-heads,” would attend dozens of times, prompted the release of the live album Live Noise (1998), which included material from the band’s earlier records and three covers that were recorded over the previous year.

Moxy Früvous and Warner Canada parted ways before 1999’s Thornhill, which was released by True North Records. The album was produced by Don Dixon (R.E.M., Matthew Sweet) and reflected the band’s maturing sound. The ‘c’ Album, another collection of oddities and B-sides, was released independently and sold at shows in 2000 before the group dissolved in 2001.

Jian Ghomeshi went into broadcasting and became the host of the CBC Radio show Q. He hosted documentaries and special programs, and also managed recording artist Lights. His first book, the autobiographical 1982, was published in 2012 and became the top-selling title in Canada. His career and national profile unravelled in the fall of 2014 when he was fired by the CBC and charged with sexual assault in incidents involving several women. He was tried in February 2016 and found not guilty on four counts of sexual assault and one count of overcoming resistance by choking (see Jian Ghomeshi Case).

Ford is a Juno-nominated artist specializing in educational songs about Canadian history. Foster has been the bassist for Great Big Sea since 2003 and formed a British Invasion-style band with Ford called The Cocksure Lads. Matheson released a solo album, is a member of the band The Ground Crew and is involved in films, television and commercials.