"I went my own road, I didn’t follow the herd. And then I ran into the Americans. I stayed with the Americans to the end of the war."

"I went my own road, I didn’t follow the herd. And then I ran into the Americans. I stayed with the Americans to the end of the war." See below for Mr. Russell's entire testimony. Please be advised that Memory Project primary sources may deal with personal testimony that reflect the speaker’s recollections and interpretations of events. Individual testimony does not necessarily reflect the views of the Memory Project and Historica Canada. 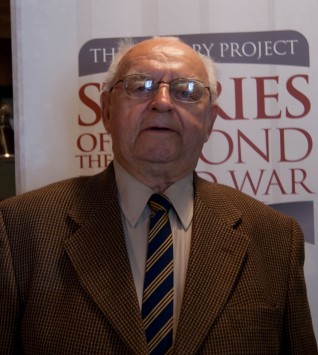 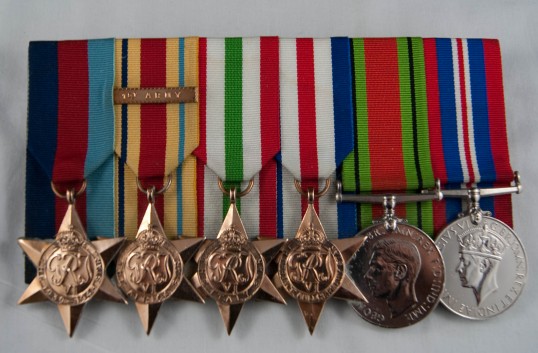 When they landed at Anzio, we were actually 12 miles from Rome. And that nutcase general, Mark Clark [Allied commander in Italy, 1944], he called them back. We were a support regiment to the Guards Brigade and when they formed, they moved back to four miles from the beach, they formed a bridgehead, but the Guards had went further. So as I said, instead of a bridgehead it was the neck of a bottle. And it gave the Germans time to build up and they just kept clipping their neck. Shipped us into Rome. We were in Rome for about a week and then I got took, stopped at a prison camp near Florence and then we went on a train. Three days in a train, right through the Brenner Pass into Germany. Stalag IVB and then I got sent to Stalag XIA in about two to three days. And then shipped out, I got shipped out to, what the Germans call ‘Kommando’ [a work group]. But before you left, they went and painted the letters KJ on the back of your jacket, on your uniform - KG, KG rather. That was German for Kriegesgefangener, prisoner of war. You weren’t allowed to walk on the curbs; you had to walk on the road, right into the factory and then that was it and they shut the doors; I never got out until fifteen months [later]. They blew it up; the factory got blown up in April, 1945. After that, the factory got obliterated - the town did actually, the town got a real hardy bombing, destroyed. And after the factory was gone, the State Police took us. State Police come up and commandeered us and they took us out building, what do you call it, they were actually taken out, they were making the roadblocks just like logs, just building them up to protect the village, you know. There were 240 prisoners working there and they took 34 of us, to go out working. You know. It was, and then the State Police guy come out and sat, every night, strange. In the distance, you could see a white beam of light all, every night. And then we found out afterwards, it was American 7th Armored [Division] racing for Berlin and they put that light up so as the aircraft would know not to drop any bombs behind that light, go over it. But 134 people, and they had 100 Russians working. Now, they weren’t in uniform. It was just Russian labour. So they had them behind us about maybe four blocks, five blocks. At the edge of the village pasture, there were troops dug in, you could see them laying down. And they spoke perfect English. Said, Deutschland sets you free; if you return, you’ll be shot. But see all of a sudden, they told the Russians. Whatever happened, I can only surmise. Panic and they all started to run across this field. So the guys, now when I look back, who the hell told these troops that were dug in there, so they’d just start to shoot indiscriminately? So that was when I got out. I didn’t run; I stayed where I was. I went my own road, I didn’t follow the herd. And then I ran into the Americans. I stayed with the Americans to the end of the war. I stayed with American 7th Armored, it was. And when they reached Nordhausen, by that time, it was only another six guys that had been in the same factory came out. But the American guy, says they’re all dead. So when they’re, and they kept moving, they got to Nordhausen, that’s where the horror camp was, one of the camps. And then, when we got to Nordhausen camp, they started to bring in aircraft to take away the serious people that were sick, you know, really. And then the Americans sized them up and said, okay guys, he says, you’re going the next day… you’re going home. So they flew us back to Belgium, to Brussels. And then of course, an escort of military police took care of us and I got a nice bed and the next day, they shipped us out to Oslo, put us on the boat for Glasgow, along with other POWs by this time, you know.