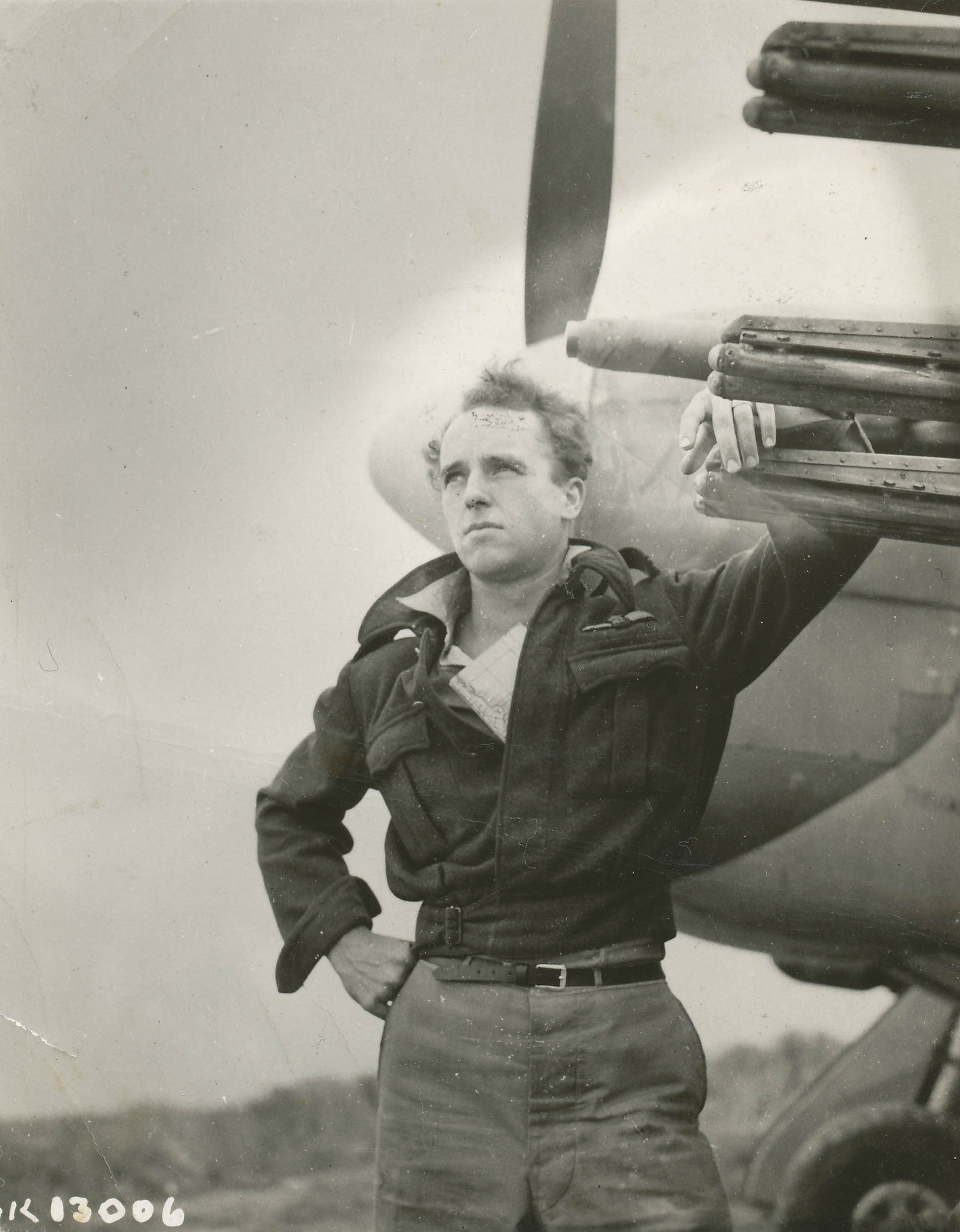 "I knew when I was hit because I was losing glycol; and I knew I had to get onto the ground, fast, before I burned. I landed and, unfortunately, I landed in the middle of the German Army and they came and took me right out."

In the air force, the glamourous airplane was the [Supermarine] Spitfire [fighter aircraft], which was a beautiful thing to fly. It was like a good horse. You just had to move your body and everything went with you or vice versa. It was a delight to fly, but it was a defensive weapon basically whereas the [Hawker] Typhoon [fighter-bomber aircraft] was offensive, purely an offensive weapon and because it wasn’t as maneuverable as the Spitfire, we were actually faster and more much heavily armed. We had our armament, equalled that along the broadside of a cruiser [armoured naval escort vessel].

Our targets were primarily, obviously ground targets, but generally moving targets. We cruised into France before the [Normandy] invasion. Of course, we were still stationed in England and we cruised over Northwest France looking for a moving target. We did catch some; and the most exciting thing was to get to find a column of say trucks, where we can get behind them, we can rake over those trucks and go up the line. And we had eight rockets and four 20 mm cannon. And the rockets were 60 pound rockets. So when a rocket hit a tank, that tank was gone and we could strafe a column of troops or trucks, we did terrible damage. But fortunately, we didn’t see the blood. It was still a competition with us ̶ we were going to get you before you get me kind of thing.

That’s what made it still exciting. If we’d seen the damage we were doing, up close, it might have been a very different feeling. And you’re keyed up with the excitement of the competition, so you don’t really feel fear. When you feel fear, when you feel fear, speaking for myself, was when you’re lying in your bunk at night saying, Jeez, I got through today, but John, James, they didn’t, they’re good friends, but they didn’t. I wonder when my turn’s coming; will I get through tomorrow? But it’s not a fear; it’s just the nearest thing to fear.

I was flying behind a chap the day before I was shot down; and I saw him hit, knew he was hit, because I saw the glycol, the coolant came off like a steam, you know, a white smoke. That wasn’t smoke, it was coolant and you knew that he wouldn’t last any time at all. His engine would overheat and seize, and he’d crash. He was going to go and he just kept on going, and hit the ground at over 200 miles an hour. So he died very fast. Like when I was hit, I knew when I was hit because I was losing glycol; and I knew I had to get onto the ground, fast, before I burned. I landed and, unfortunately, I landed in the middle of the German Army and they came and took me right out. I didn’t hurt myself in the landing. I managed to make a good belly landing in the field, but the Germans were in that same field. So they took me. No excitement about the apprehension.

They just took me along with them, with a group. They weren’t prepared to look after prisoners, they were frontline troops. There were several of us. I was the only pilot; the others were army. We were just under guard, moving with them as they moved. And they got rid of us out of the frontline troops; they sent me back to join a group of prisoners. They had men detailed to look after these prisoners. I think there were probably a dozen of us. And overnight, they’d stick us in a room in a building and a couple of guys would take turns staying awake to make sure we stayed in the room, kept us in the room.

We weren’t frightened. We just assumed we’re prisoners, well, it’s over for us at the moment, but the main thing is to get away. There were two other army chaps in the group, there were more than two, but there were two that I sort of connected with, who said to me, "what do you want to do, are you going to sit the war out as a prisoner?" And I said, "no, I’m going to escape." They said, "well, let’s go;" and I said, "wait a minute, wait a minute, I intend to escape, but I want to make a successful escape." We were stopped in the group while the NCO [non-commissioned officer] in charge checked the farmhouse, which we were in front of, to find if there was a suitable room. We were in the group; and I said to the boys, just ease back. It was pitch black and I think it might even have been raining, but I don’t remember really. Just moved back, going back out of the circle. And then moved when they ordered the group to move on, we sort of stepped back quietly a step back; and it worked, the three of us did that. I’m sure they discovered after, realized after a few minutes that there were some men missing, but there was no use of them go and try to find us in the dark. In the loft in a barn, that’s where we had hidden; and I remember jumping sort of the middle of the night, jump down and ran to meet the Allied Army, which was advancing, and shouting and waving at them, "don’t shoot, don’t shoot!"

Apparently, if you’ve been a prisoner of war and escaped, if you’re captured a second time, under the Geneva Conventions [international laws governing the treatment of combatants and victims of war], you can be shot. So they won’t put you back in danger again, won’t put you back in the service again. I eventually got passed back to my squadron [No. 182 Squadron, RAF], managed to find it. But the CO [commanding officer] says, I can’t put you back in an airplane, I don’t know what to do with you; you’ve been a prisoner of war. So he sent me back and that was the story of my career from then on.

I wanted to go back in because I liked to, once you start, you’re in the game, but you hadn’t won it yet. You’d like to be a part of the winning team. The word I think of, you were so keyed up that you weren’t afraid ̶ you’re in the game.