"The excerpt in English is not available at this time. Please refer to the transcript in French."

"The excerpt in English is not available at this time. Please refer to the transcript in French." See below for Ms. Powys' entire testimony. Please be advised that Memory Project primary sources may deal with personal testimony that reflect the speaker’s recollections and interpretations of events. Individual testimony does not necessarily reflect the views of the Memory Project and Historica Canada. 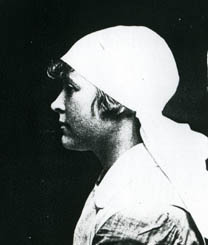 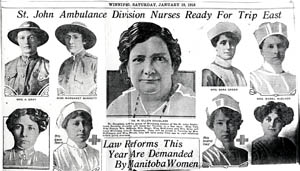 My name is Frances MacNeil. My mother, Gwendolyn Powys MacNeil – she was recruited into the St. John's Ambulance's Volunteer Aid detachment to go overseas in the First World War as a nurse's aid, and was stationed in (?) Hospital in London, and had many, many friends who I got to know very well over the years. She just had a wonderful time there and really enjoyed the experience, and met many soldiers coming back from the front.

She never really talked about the hospital itself. It was more the meeting of relatives over in England while she was there. I think that talking about it was too hard for most of them because the injuries were pretty severe, and they really didn't want to talk about that too much. It was the same for my father, who was badly wounded in the First World War, as an Imperial Army officer. He never talked much about what happened either. He talked about some of his experiences, but not about the injuries, and I think that's what mother felt too, that she didn't talk about the injuries and how they happened, but how they helped the soldiers to come back into living again and doing things.

The only things I have are these clippings from Winnipeg Free Press of the pictures of all the women from Winnipeg who went overseas with Dr. Ellen Douglas, who was in the command of that group. It's interesting to see all these pictures, knowing so many of them myself in later years, and to see them in their younger days. I think of going over at twenty, twenty-one, twenty-two – that sort of age – and thinking of when the Second World War came along and I was the same age, and I couldn't go because I had a medical problem that kept me out, but I was dying to go.