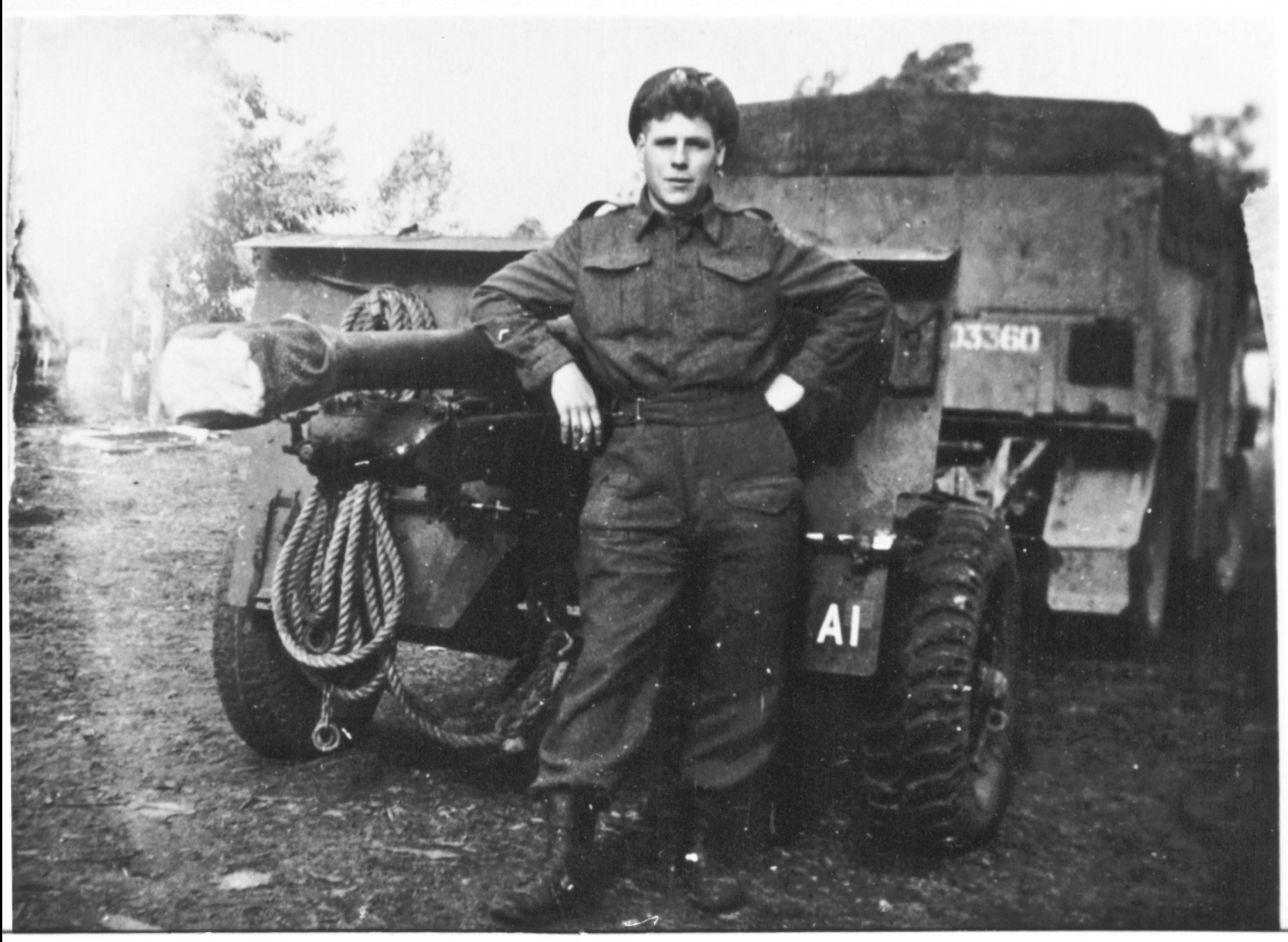 We were training for D-Day where many screens would take place. All the truck and tank engines were waterproofed. We practiced on water, LSTs and had an opening on the front with ramps to go down on the water’s edge. Sometimes, we were in six feet of water. When D-Day was near, some of the troops were taken away to Tilbury Docks in London. We were all behind barbed wire for security reasons. And there were the spare Bren Gun Carrier trucks. We slept with eight men crowded in one tent. I was chosen as a trustee, a soldier who could be trusted not to run away. It was a great honour to guard the vehicles and equipment at Grays, Essex [England] before we were loaded on the LST, Landing Ship Tank.

I slept in between the truck on a stretcher. The people who lived on the same street would allow us to have a bath in their houses and would sometimes give us tea. While we were onboard an American LST, the food was the best. We were eating and sleeping like kings. On June the 1st, we had an orange for lunch and then we had pork and white bread for dinner, it was the first time in 24 months that we had white bread.

On June the 2nd, still onboard the LST, but the meals are good; we had chicken and cranberry sauce for dinner. On June the 3rd, we started sailing down the coast. On June the 4th, we anchored out of port, but there was still plenty to eat. D-Day was supposed to take place on June the 5th. Because of the stormy weather, we were delayed a day. We set sail. We went past the white cliffs of Dover [England], it was very rough and there was plenty of seasickness. And then on June the 6th, we anchored off the shore and then landed at Juno Beach in France. The main part of the regiment came from a different direction, but we soon found them.

This is D-Day, June the 6th, 1944. The 3rd Division was shown to be the first off the boat on D-Day. The 2nd Division had been sent to Dieppe and had been slaughtered. The 1st and the 5th Division had been sent to Italy. Politics didn’t allow all Canadians to be sent to the same place because Canada was a small nation in numbers and there was fear of the eligible males being killed and there would be nobody to carry on the next generation. The 3rd Division was made up of nine infantry battalions and three field regiments of artillery. The signal corps was broken down into small groups of trade and communication. We had 32 men, about where six were wireless operators, six were linemen, five were electricians and there were four dispatch riders, the rest truck drivers and others.

My job was to see that all the radios, telephones and switchboards were operating efficiently and discharge the batteries that supplied the power to operate the sets. It was a never ending job. We were dropped off on an LST, we soon found the regiment, started doing the job. But the artillery had an observation post near the front of the brigade headquarters that gave instructions to the regimental headquarters and in turn, gave the information to the batteries. They were told how many rounds to shoot and when they wanted shell fire. We had to go to brigade headquarters one night in the dark to do a job. We were traveling in a truck with no lights on. There was shells exploding on the horizon and when they forced us off the road, it was like being in a severe thunderstorm. The shells made a whistling sound going over your head and they made a big bang when they hit the ground. They made a lot of dirt fly and put large holes in the ground, but we got up and back okay.

We didn’t have much land in front of us. Behind us you see the water, we couldn’t back up, we had to go forward. German aircraft would come over in the dark and light up the sky with chandeliers [a type of flare]. They were so bright that you could read the papers by them and it would last a long time. And they used the light to pick out their targets and drop their bombs. Then the anti-aircraft batteries fired at them, the tracer bullets lit up the sky as well. They came every night. The artillery would fire barrages at the enemy and they at us, so it was necessary to keep alert. When the troops moved up, sometimes our own air force strafed the roads and [Hawker] Typhoons shot up the Pole, sometimes us with rockets, and they were on our side. [The 1st Polish Armoured Division was formed in Scotland and attached to the 1st Canadian Army.] The more troops they arrived, the more we occupied. The Germans couldn’t find us that way.

The war in France was a lot of noise from artillery dueled from both sides of the Allies and the Germans. It took a while to get used to. We were in the centre of all this. They say we fought all the way every day. We moved many times. I don’t think the common soldier knew what it was all about. At the time, we never had a map to know where we were going, we just moved and we followed the others who had the map.