"They just swung the gun on him and was ready to fire when he swerved off over our bow, came back on the other side, dropped the torpedo and the Liberty ship blew up. There were no survivors."

"They just swung the gun on him and was ready to fire when he swerved off over our bow, came back on the other side, dropped the torpedo and the Liberty ship blew up. There were no survivors." 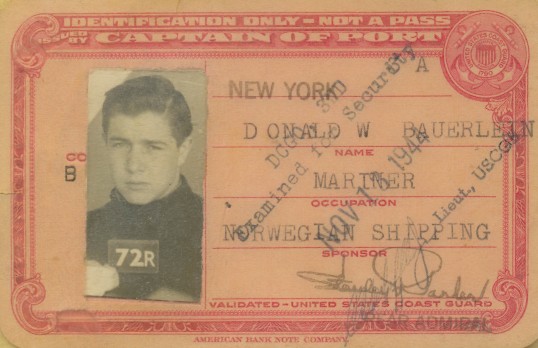 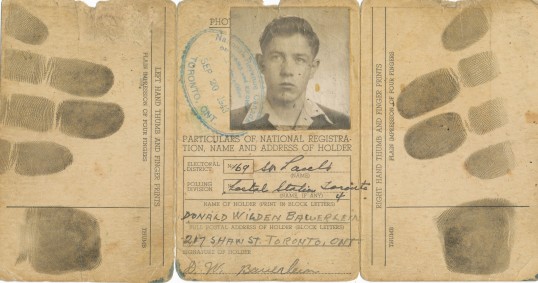 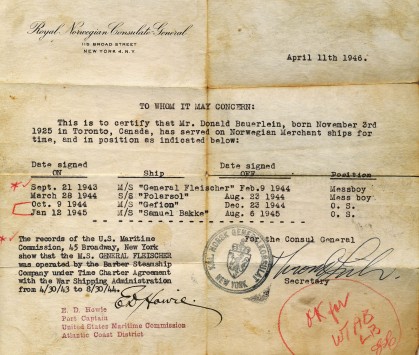 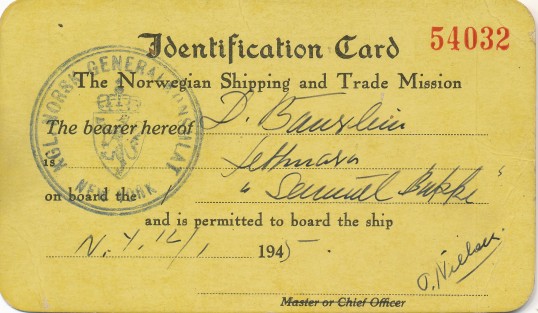 We had a load of army trucks and aviation gasoline. We were taking it to Bandar Shapur in North Africa. Bizerte [Tunisia] was the port we were headed for in Africa. But we made it to the Persian Gulf. We were in a convoy that took us into the Mediterranean and just after we got into the Mediterranean, we had planes over us all day long, leaving vapour trails. But they said that we were in for a raid that evening, to just watch at sunset. And we did have. We learned later it was supposed to have been a 50-plane raid. We lost a few ships. The one I was on was badly damaged by an American Liberty ship [merchant vessel auxiliaries to the US Navy] right beside us with 500 troops and sixty-some crew. But the airplane came in right low to the water, and our gunners on the foredeck – we had four British Royal Artillery gunners to man the three-inch gun on the foredeck. And the plane, they said that it was headed right straight for our ship, and it just swerved off. They just swung the gun on him and was ready to fire when he swerved off over our bow, came back on the other side, dropped the torpedo and the Liberty ship blew up. There were no survivors.

The 500 troops, we watched them going all the way across the Atlantic and going to the Mediterranean. And every day they used to come out on the hatch, they were playing basketball back and forth on the hatch and things like that. But every night at sunset, there was 500 of them on the ship loaded with ammunition and those army trucks. But every night at sunset, they’d put them down below in the upper hatches, I guess they would have had beds and that down in there. It was a Liberty ship.

But they had just been put below, just all gone down below, and I guess it wouldn’t have mattered where they were on the ship anyway, it would have been the same thing. But no, it was a memory that sticks with you.

But the other thing was, when the corvettes would come up behind the tanker to try to pick up the pipeline when it was rough, too rough to get it, a big wave would hit the corvette, you couldn’t see anything, well, the guys would all be lined up waiting to pick up the pipeline. And when a wave would hit, wash over them, you couldn’t even see them. We’d stand watch on them to see if they were going to be there when the wave broke and there they’d be, all of them would be standing there, water dripping off them, waiting to get a hold of the pipeline. But I thought, I’m glad I’m not on one them.

I know we were just off of the, they called it Coffin’s Corners, but we were just off the coast of Algiers. Well, you couldn’t see land, we were far enough out I think. I don’t quite remember just how far from Algiers we were but we always said it was, Algiers was Coffin’s Corners. Well, the bombers came in at just about sunset, it was still daylight, you could see them alright. Later, I heard there was 50 of them. But they dropped bombs, dive bombers, kind of eerie to watch them drop bombs. The bombs were landing just between the column. We had already formed the convoy up again. But they were just dropping them in between the ships. None of the bombs hit our ship but there were a row of them between our ship and the one ahead. But the torpedo plane come in on the port side, flying right low to the water. And the gunner said that they just swung the three-inch gun on him and just went to fire it when he swerved off, went out over past our ship and came back on the opposite side, on the port side. He dropped the torpedo but he was so low, the ship on the other side said that no airplane came out on that side of the explosion. And they figured that he was so low that he went with the torpedo and the ship.

But there was nothing, just a twister of black smoke going up in the sky from the Liberty ship. There was no sight of it after the explosion. It was just a big explosion with a curl of black smoke and waves hitting, you know, coming at you. They kind of sort of hit you and then pulled away and come back and hit you again. That was the way the air was around where I was anyway.But anyway, I think that was why my hearing is not the best. I have tinnitus.

And I know a friend of mine that was on Norwegian ships too and lived in Trenton. He got his medals, I think everybody that sailed on the Norwegian ships got their medals. I don’t know how many Canadians did sail on Norwegian ships, but we were able to go on them but they didn’t consider us veterans until just a few years ago.