"We were in France, and we were in Belgium. And to me, serving with those girls was the best thing that ever happened to me."

"We were in France, and we were in Belgium. And to me, serving with those girls was the best thing that ever happened to me." See below for Ms. Jamieson's entire testimony. Please be advised that Memory Project primary sources may deal with personal testimony that reflect the speaker’s recollections and interpretations of events. Individual testimony does not necessarily reflect the views of the Memory Project and Historica Canada. 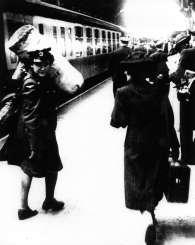 My name is Dorothy Jamieson, I was born in Liverpool in 1918. I joined up the day the war broke out in 1939, but wasn't called up for a few months. In the meantime, I drove an ambulance for the ARP - Air Raid Precautions - in Lincolnshire. Joining up the WAAF at the end of 1939 - Women's Auxillary Airforce. I got attached to the Royal Canadian Air Force base in Digby, Lincolnshire. I was on loan from the RAF to the Canadian Airforce as a Sergeant with Fighter Command Control, Operations Special Duties. I served in Ghent, Belgium, and Amiens, France, where the peace treaty, by the way, was signed in 1945. I took the first 69 girls over to France after D-Day. I was the Sergeant. And these girls were absolutely marvelous. They really were. We were known as "Ladies in Waiting". Because we were trained at Uxbridge, Stanmore... So that we would have the experience to man fighter control operations - whether they were mobile, or in a building. And we were called the "Ladies in Waiting", and I was very, very proud of them. They served with every possible imagination of personelle to represent... they were true ambassadors of England. We were in France, and we were in Belgium. And to me, serving with those girls was the best thing that ever happened to me. Churchill, who was my boss, of course. And he was the most marvelous man. And there will never ever be another leader like Winston Churchill. He came in... I was warned he was coming to Stanmore to the ops room, to inspect it all around. He was with a squadron leader, who was administrative. He wasn't anything to do with operations. And I saluted Sir Winston and said: "Sir, at your service." And he loved the girls, by the way. He looked at all the girls around the potting table. And the squadron leader turned to me, he said: "Sergeant, you are dismissed." I said: "Sir", saluted him, and turned around. Sir Winston Churchill said: "Sergeant, one moment. Squadron leader, you are dismissed. The Sergeant will show me around the ops room."