"At Dieppe, with only 5,000 of our troops involved, we had almost 1,000 killed and 2,000 taken prisoner, many of them wounded, in just six hours battle. So, you can see the ferocity of the battle."

"At Dieppe, with only 5,000 of our troops involved, we had almost 1,000 killed and 2,000 taken prisoner, many of them wounded, in just six hours battle. So, you can see the ferocity of the battle." See below for Mr. Warren's entire testimony. Please be advised that Memory Project primary sources may deal with personal testimony that reflect the speaker’s recollections and interpretations of events. Individual testimony does not necessarily reflect the views of the Memory Project and Historica Canada. 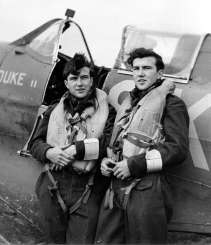 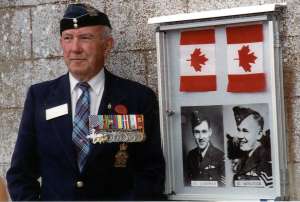 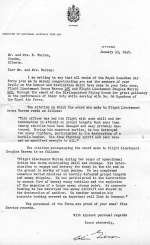 My name is Douglas Warren, with a nickname known to all as Duke. I served in World War II from 1941 to the end of the war. I remained in the service and served in Korea and I retired from the Canadian Air Force in 1973. And for several years after, I was a member of the Reserve working with Air Cadets. When I joined the war, of course like every one else, I was 18 years old and I started my training in Canada, which was largely in Alberta. I then went overseas, did some additional training as a fighter pilot and was posted to 165 Squadron, which was an RAF Squadron, and my twin brother was with me all this time. And we did all our training and most of our flying in Europe together as well. The first big operation then, which I remember vividly was at Dieppe. Dieppe was a Canadian adventure, you might say, although it was supported by the British Navy, the Royal Air Force, the Canadian Air Force and about a thousand Commandos went. At Dieppe, with only 5,000 of our troops involved, we had almost 1,000 killed and 2,000 taken prisoner, many of them wounded, in just six hours battle. So, you can see the ferocity of the battle. Speaking from the Air Force, the air battle at Dieppe was the greatest air battle of the war. Now, it wasn't the most important at all, but it had the most aircraft involved in a small space of time in a small area. And in an area not much bigger than our Comox Valley, or roughly the size - if you could imagine Toronto, and probably not as big as Toronto now - you had 3,000 sorties by Allied aircraft and almost a thousand sorties by German aircraft. So there was 4,000 aircraft overhead in the first five or six hours of the battle. You can see how active it was. Really, the beating was in the Army though. We lost roughly a hundred of our fighter pilots, either killed or prisoner of war. I have often talked to Canadian Army people of the horror of which they went through. I always acknowledge the 19th of August, as I hope most Canadians would, at least give a thought to all the Canadians who were lost there. After the Battle of Dieppe, which was one of my first battles that I can remember, I did what was called a rest tour for awhile, as was the way of giving your people a rest from operations. I then came back, my twin and I, and we flew with 66 Squadron, again an RAF Squadron. A lot of people don't realize that many Canadians were flying with RAF Squadrons, and the reason for that was we couldn't support enough squadrons to use all Canadian air crew. And Canadians did a wonderful job of producing air crew and others as well. And it's not realized by many that one of the biggest contributions, almost, Canada made during the war was this training of air crew. And it was all done in Canada. The people doing it were not exposed to the terrible hazards of an act of war. But what they did, contributed a great, great, deal to the winning the war. And the same goes for the training which was done in Esquimalt and Vancouver and Halifax. It was very, very important work which they did. And we normally don't give credit to the people who stayed in Canada and did such valuable work.