"The German submarines don't like this weather but we do, to keep them down."

"The German submarines don't like this weather but we do, to keep them down." See below for Mr. Yeadon's entire testimony. Please be advised that Memory Project primary sources may deal with personal testimony that reflect the speaker’s recollections and interpretations of events. Individual testimony does not necessarily reflect the views of the Memory Project and Historica Canada. 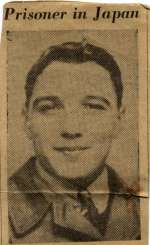 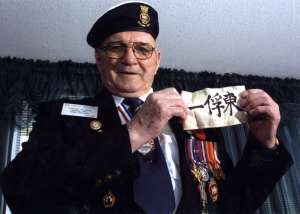 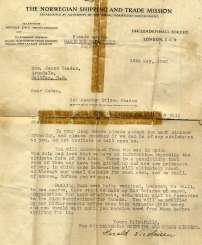 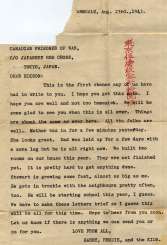 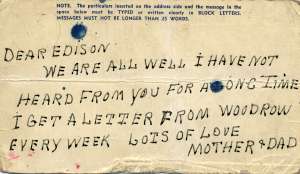 Edison Yeadon. It was some time in January that we left Lac Huey for New York and we're sailing along nicely, five knots, one evening just south of Newfoundland, we heard the depth charges going off. And then all of a sudden, a bright flare lit the sky. And it was signal to separate, going our own way. And then the engine crew came running up the ladder and we had been hit by something that rattled along the bottom of the ship. We figured that it was a dead torpedo and we were very lucky.

The next day, the weather turned for worse, which is a blessing for us. The German submarines don't like this weather but we do, to keep them down. The weather was so bad we had to put up a sail to keep her into the wind. We had to go into dry dock in New York. We left New York dry docks to load cargo for India. We loaded all the military equipment, tanks, oil drums, ammunition, trucks and everything to fight a war with. She was an old coal burner. Her name was Djoust, a Norwegian tramp. She was a good old ship and I enjoyed being on her. Just south of the equator the Germans caught up with us. Out of the sky came a seaplane with a hook and cut our aerial to prevent us from sending a signal that we were being attacked. Then the seaplane machine gunned the deck. Bullets flying everywhere. All our aircraft guns were put away. Didn't expect anything in the middle of the south Atlantic. The Raider shelled us from a distance and they gave up shelling as soon as we stopped and went for the life boats, we didn't have a chance, so we abandoned ship.

I ran to my life boat station, climbed into the boat, with John Snowdon at one end and I at the other end. They lowered us down to the water and I saw this water coming in. The crew up on deck asked me if I had the plug in. They didn't realize that the lifeboat was full of bullet holes and the men on deck went looking for another lifeboat. We finally got into the other lifeboat and I took an oar and started rowing. And up came the big ship, the Raider and picked us up. We sailed around on her for a month. Then we were transferred to a supply ship. And we laid in the Indian Ocean for two or three months. Then we were off to Japan. The Japanese made us bow to the commanding officer that took over on the docks. I spent three years in the Japanese prisoner of war camp. Released by the Americans. That's about all I can say for now.