"There was a shell coming and I knew by the sound it was close. So I look at the hole and I look at the barn and I figure, I’ll make the barn first."

"There was a shell coming and I knew by the sound it was close. So I look at the hole and I look at the barn and I figure, I’ll make the barn first." See below for Mr. Arsenault's entire testimony. Please be advised that Memory Project primary sources may deal with personal testimony that reflect the speaker’s recollections and interpretations of events. Individual testimony does not necessarily reflect the views of the Memory Project and Historica Canada. 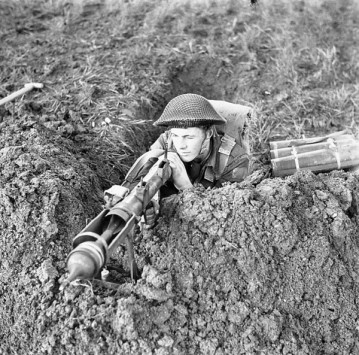 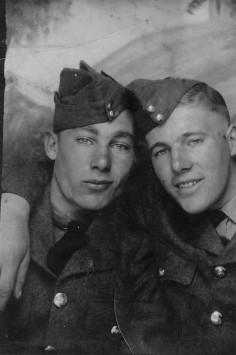 I did some training in Charlottetown and then [Camp] Aldershot [Nova Scotia]; and was sent to England. From England, we went to Africa. We were there just a couple weeks. So from Africa, we landed in Algiers and then they put us in boxcars. It was written on the boxcars in French: “room for eight horses” ["40 hommes ou 8 chevaux"]. And we were packed like sardines in it. So we were there two days and one night in those boxcars, and then we went to a little place they called Cork Forest [near Tabarka, Tunisia]. From there, they choose the troops; they sent them where they were needed the most. We were there for about a couple weeks and then after that, after two weeks, they pick a gang out, I was picked out and we went to Italy, sailed to Italy.

We got off the boat. They put us in truck and we were trucked right to the front line. Yeah, it was Christmas Eve [1943]. I was in "B" Company [The West Nova Scotia Regiment]; and I was just a private, and put in a platoon, that’s 33 men, I think, a platoon. And when the platoon is split in three sections, and I remember one day our section was all walking in file, one behind the other, and a shell landed. It must have landed on the first one, on the sergeant. It killed him and I remember, the force of the explosion threw us in the ditch. I remember when I got up, there was only three of us standing. There was three killed and three wounded. I was lucky. I thought I was hit. When I got up, my nose was bleeding, but it was from the concussion. I wasn’t hit, but I was deaf for a while, a few days, but it came back; but never the same.

One time, I remember that an officer called me, we were, took this little farmhouse, little place, took a few prisoners and then after a while, the first thing you do, you dig yourself a hole. So I digged myself a slit trench; and after I was finished, the officer came out, there was a barn not too far from there, the officer came out, he asked me if I was finished with the shovel. I said, "yes." He says, "bring it over." So I started out with the shovel; and I was about halfway from my hole to the barn, I heard this bang. There was a shell coming and I knew by the sound it was close. So I look at the hole and I look at the barn and I figure, I’ll make the barn first. So I started running and the officer stayed up there, outside, he was just looking at me. I got to the barn and I just threw myself in and out from the doorway, in the same time as the bomb exploded. And he fell. He was hit, he died of his injury. He lost his life by saving mine. After awhile, I went back to the hole and the shell landed right on the edge of my hole. My steel helmet was in the bottom. There was a hole in it, big as my fist. My rifle butt, it’s all wood, that was split in two or three pieces. So if I had have choosed the hole, it would have been my grave.

I remember when we took a boat [early in 1945], it wasn’t only a day or two on a boat, went to France and to the Netherlands, and then once we were there, they take a gang out for leave; and I was due for a leave, they pick me out. So I went on leave, on a nine day leave, I went back to England. After I got back, I was only back about four days and the war was over [the war with Germany ended on May 8, 1945]. And it’s so funny when we got the news, we were at the end of a field and on the other side of the field, you could see the holes the Germans were in. They told us not to shoot at anybody. They says, the Germans got the same news. Everybody was out of their hole, walking around and even waving at the Germans. They would wave back at us. It was a funny feeling. After a couple days, well, they say it’s over.