"I was entirely alone. There was no one around me that was, that was alive and able to give me moral support or help, or anything else. The third counterattack was just one too many. I wound up being a prisoner of war."

"I was entirely alone. There was no one around me that was, that was alive and able to give me moral support or help, or anything else. The third counterattack was just one too many. I wound up being a prisoner of war." See below for Mr. Bagstad's entire testimony. Please be advised that Memory Project primary sources may deal with personal testimony that reflect the speaker’s recollections and interpretations of events. Individual testimony does not necessarily reflect the views of the Memory Project and Historica Canada. 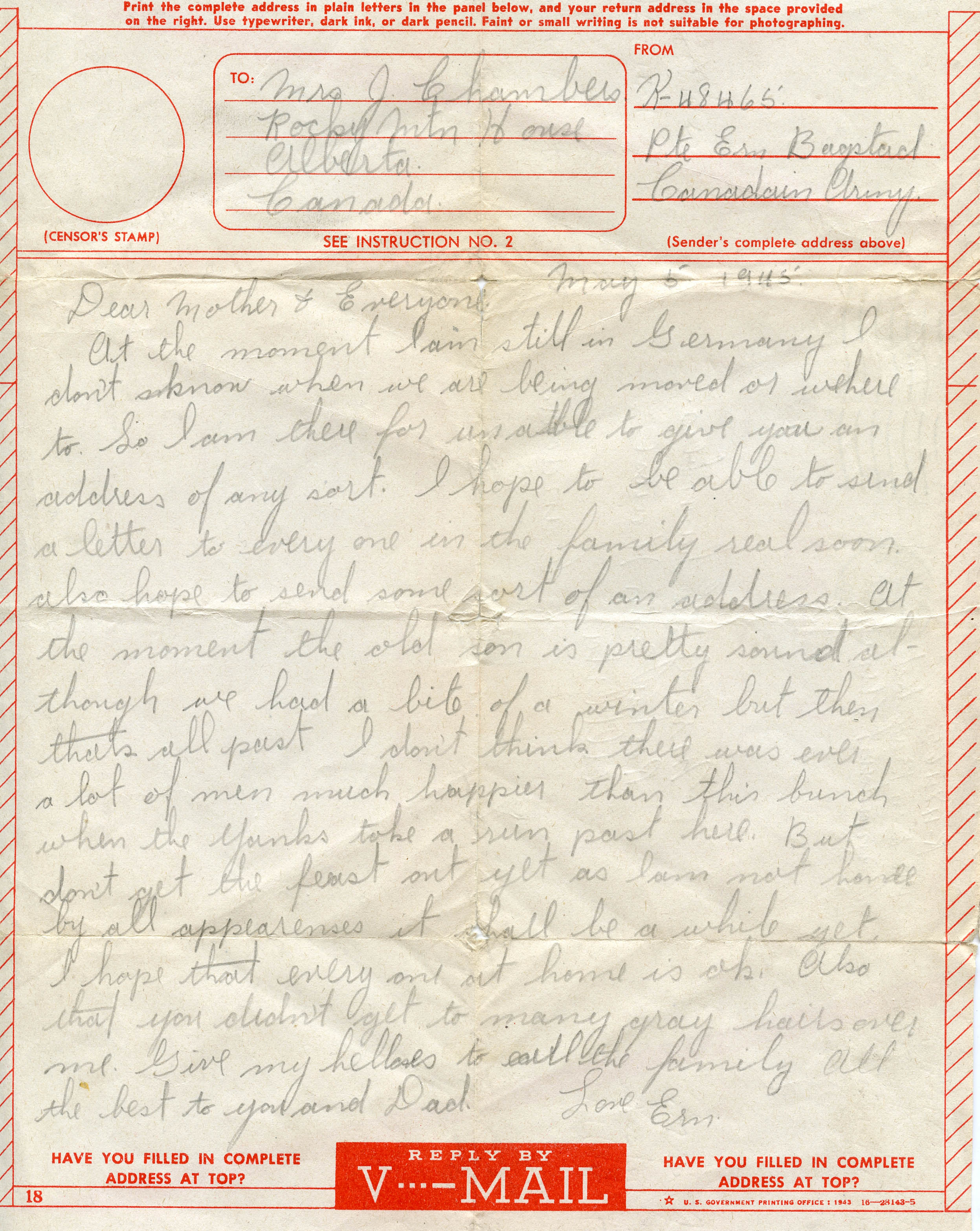 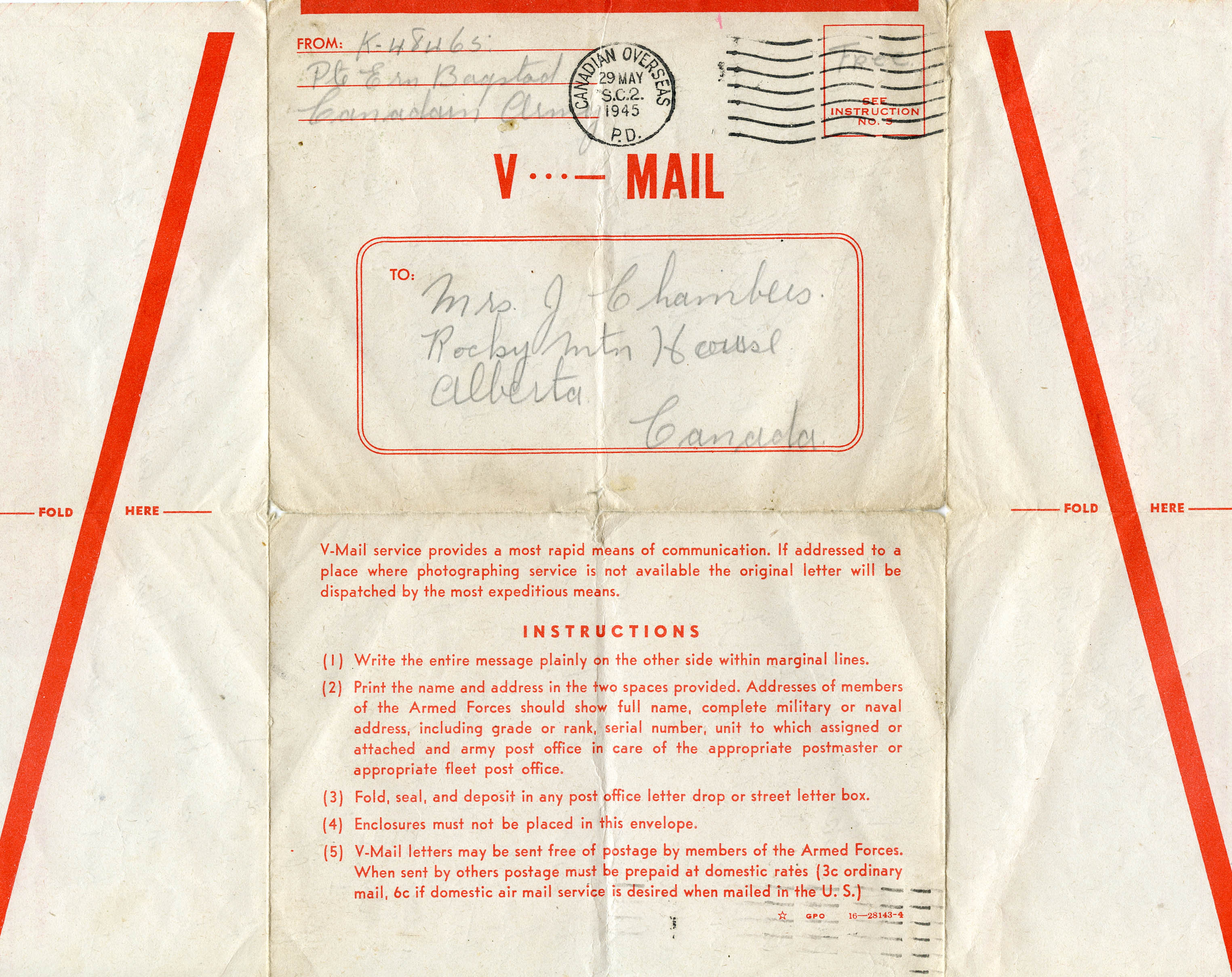 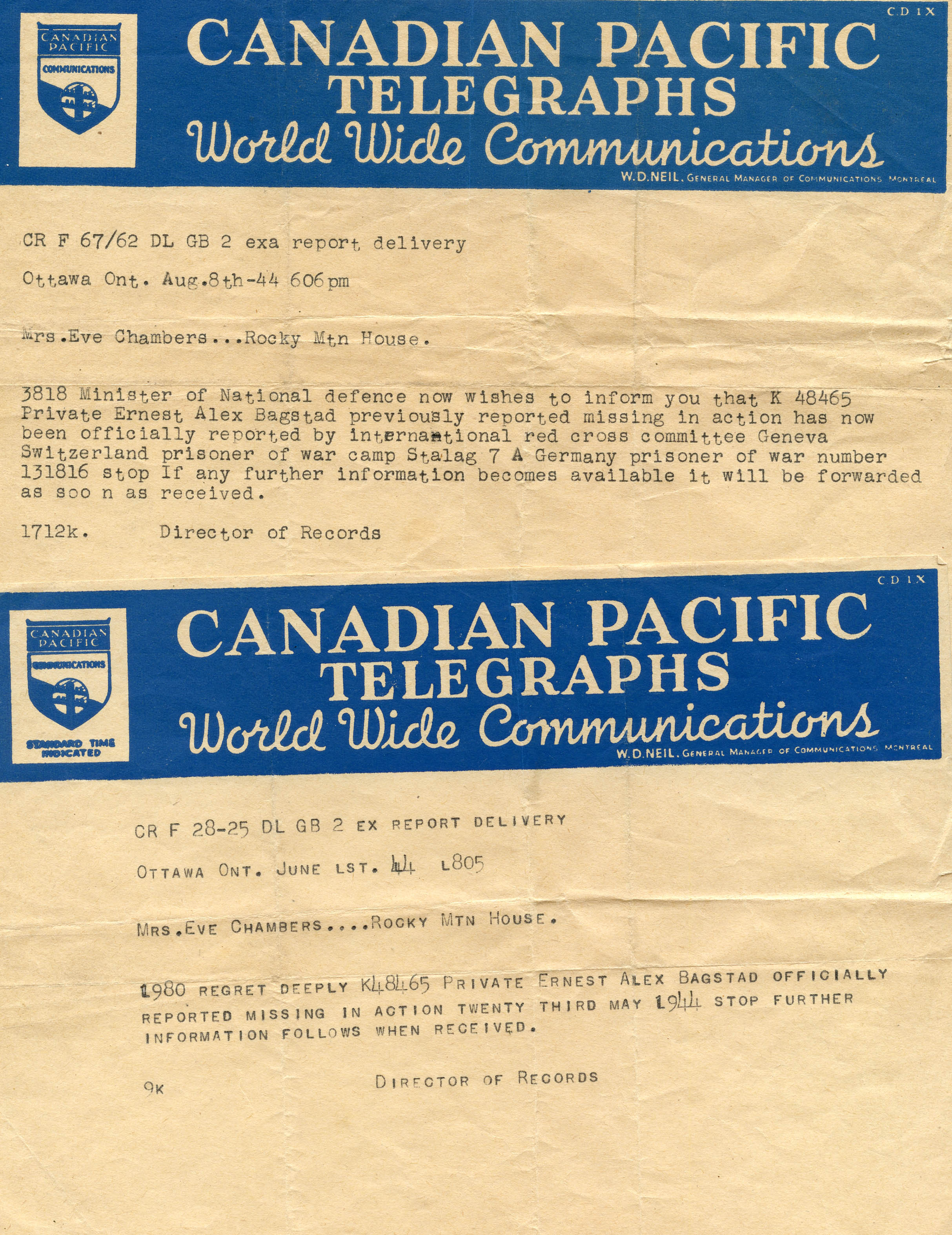 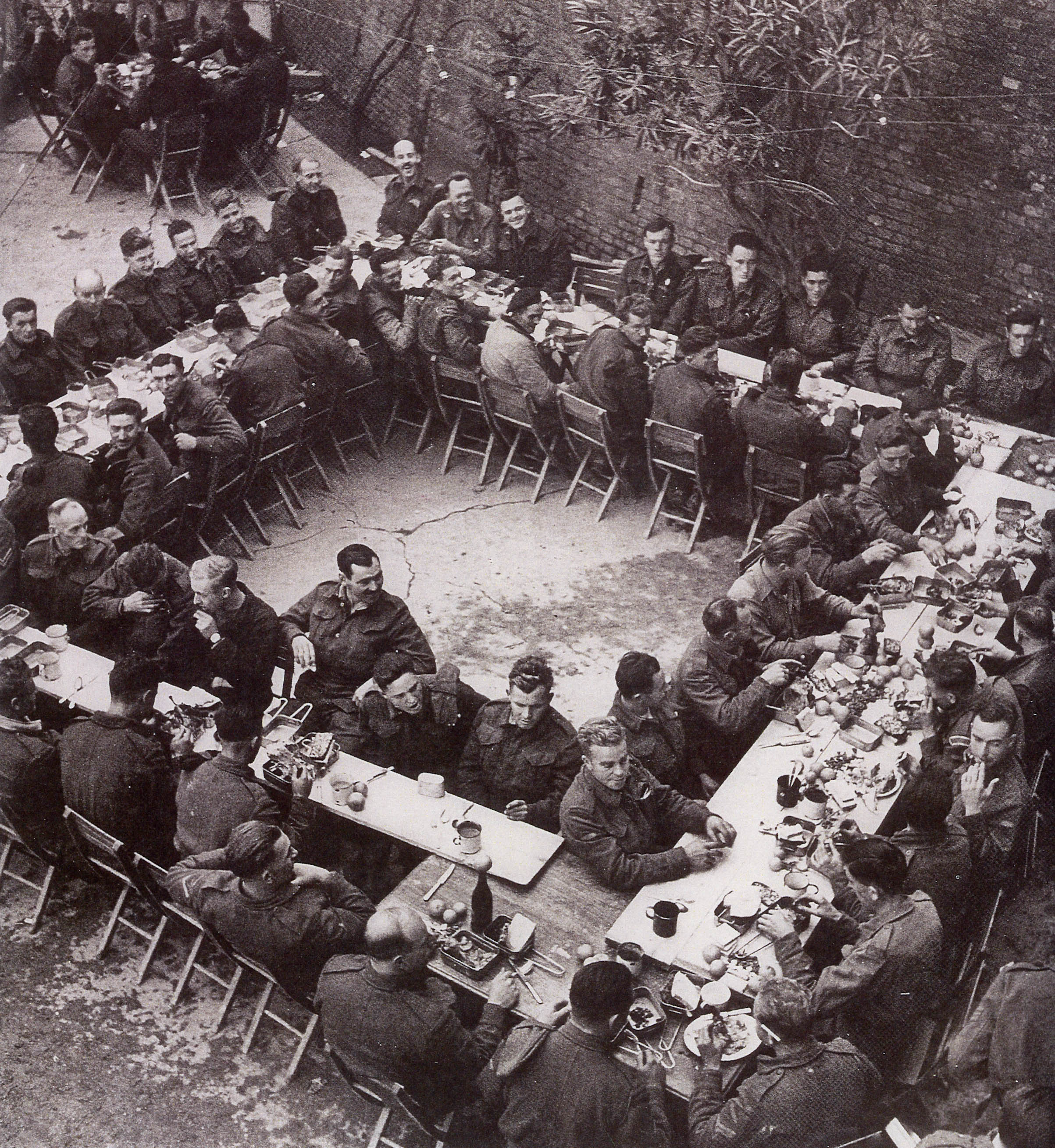 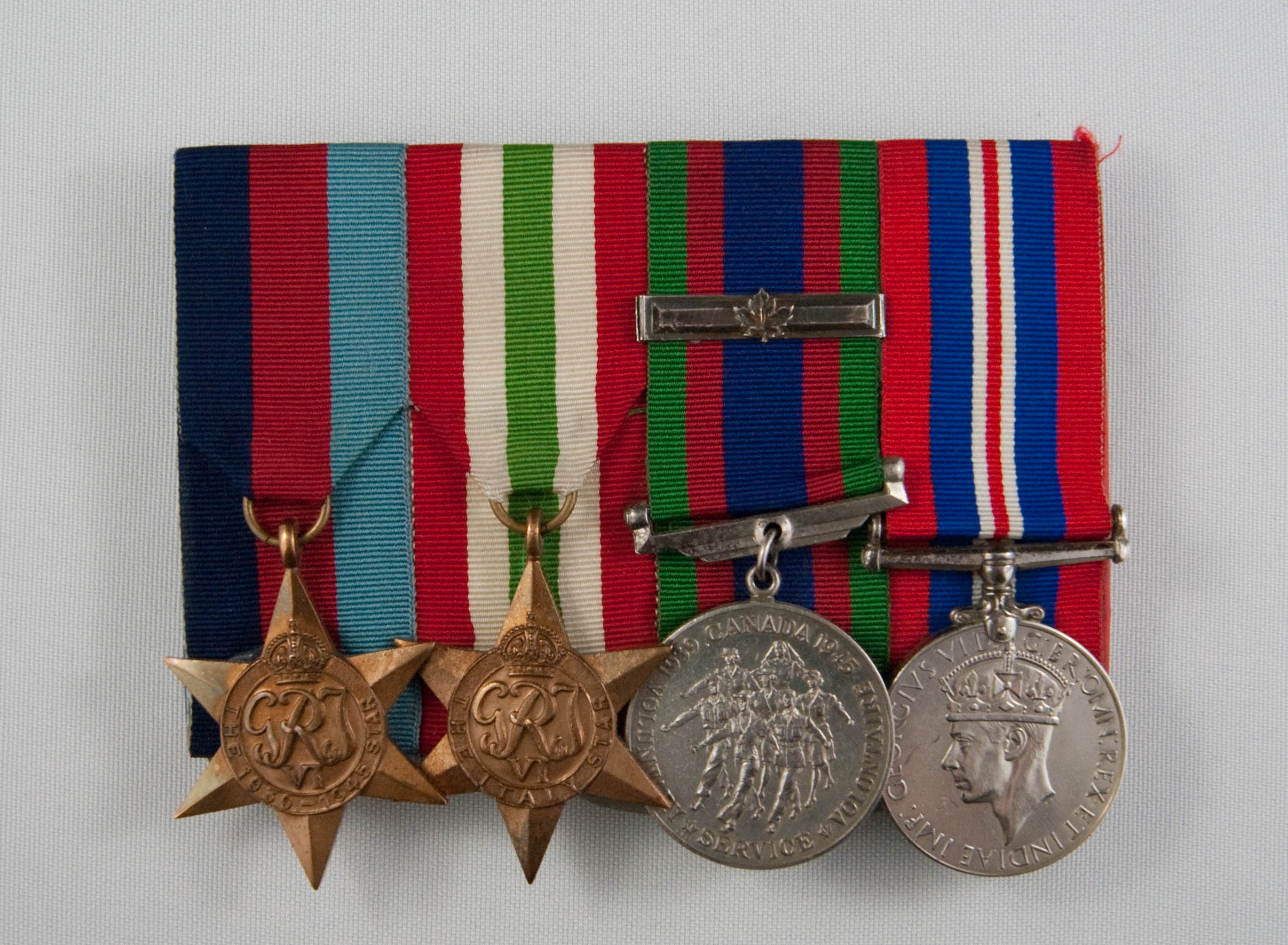 Well, my first major fight was in Ortona. That’s a small city on the Adriatic coast of Italy. We had a seven and a half day battle there, taking that little town; and from time to time, it was a bit hair-raising. And that was where we had our very famous Christmas dinner: Seaforth Highlanders’ [of Canada] Christmas dinner. And that I find amazing, absolutely amazing, that cooks could put a meal together four blocks away from where the war was.

A fellow by the name of Matthew Halton [Canadian war correspondent] was broadcasting on shortwave [radio] back to Canada while we were having Christmas dinner. We had a piper who was playing the regimental march past [the regiment’s anthem]; and my stepfather, he heard the regimental march past and he turned to my mother and he said, Ernie’s having dinner. Can you just imagine something like that? He had a second sense, I guess. He was in the Imperial Seaforth Highlanders in the First World War and that, of course, was why I joined the Seaforth Highlanders in the Second World War. He seemed to have a sense about where I was and what I was doing, practically all the time.

On the Liri Valley, on the Hitler Line [German defensive line in central Italy], the Seaforth Highlanders were the only regiment that actually reached its destination that day. We went a little bit too far, half a dozen of us or so. Through the course of the day, we lost all our tanks; and we lost all our artillery support, and communications with the regiment were totally out. Our radio operators were either alone or wounded, or killed, that sort of thing.

And, of course, the radios in those days were pretty tough. One guy couldn’t handle it, you know. One guy could carry the radio, but somebody else had to carry the batteries because the battery pack weighed about 70 pounds, and the radio was pretty heavy and bulky. So you’d have to have two men together at all times and this wasn’t always easy to do. Quite often one of them would get wounded or get killed, or something in that nature, you know, so then your communications are gone, right.

And then, of course, you could only go so far away from headquarters and the radios were not very strong. So they couldn’t carry any great distance at all. So we were out of touch with headquarters; and headquarters couldn’t have done anything for us anyway. So when we, four of us, dug in and it was rather stupid what we did because we knew that we would get counterattacked, knew it, you know ̶ absolutely, positively, we were going to get counterattacked. We didn’t look after ourselves good enough.

So on the first counterattack, two of the guys that were with us got wounded; and on the second counterattack, the other fellow that was with me, he got killed. So then I was entirely alone. There was no one around me that was, that was alive and able to give me moral support or help, or anything else. The third counterattack was just one too many. I wound up being a prisoner of war.

In my first recollection after we were ensconced in the prisoner of war camp was that one of the guards came in to our compound and he was bragging about how D-Day had just happened. I think maybe this was the seventh of June. He was proudly telling us that all those silly people who invaded France were going to find themselves back in the ocean in another day or so. We begged to differ with him.

Fifty of us went down to Munich to work on the railroad; and we were repairing a railroad that had been kind of jolted out of shape, bent around a little bit from bombs, you know, that landed close to the railroad track and that sort of thing. We didn’t do a very good job of it, on purpose, of course. Sometime later, the train came in and it was coming along on there, coming into Munich it was, you see; and I believe it was carrying coal or something of that nature. Anyway, it jumped off the track and had a big crash. There was jubilation amongst the 50 of us because we had done things on purpose, that sort of thing. But you couldn’t show any jubilation because, holy cow, the German guards wouldn’t take too kindly to that.

It was kind of tough to swallow your happiness, but it was a wonderful feeling afterwards, you know. Oh man, we did something nasty. The Canadian soldiers are irreverent in a lot of respects and yet, in most respects, they were anything but.

So we were the type of people who would, I know, because I’ve done it myself, you’d give away your last drink of water on a very dry day. Give your last rations away too, you know. Somebody who, some civilian, some little guy comes running to you and says he’s hungry; you give him what you’ve got. I kind of think that that’s the sort of thing that fellows ought to do. It reminds me of a story of a fellow by the name of Isvelt and he was a peacekeeper. He ran into a lot of children that were homeless, so to speak, their homes were destroyed; and, of course, their toys and everything else were destroyed with them. He wrote home to his mother and his mother started making little dolls and sending them to him; and she recruited her friends and then he started giving the dolls away to little children without things to play with, and that sort of thing. I think those are the human things that Canadians are noted for. 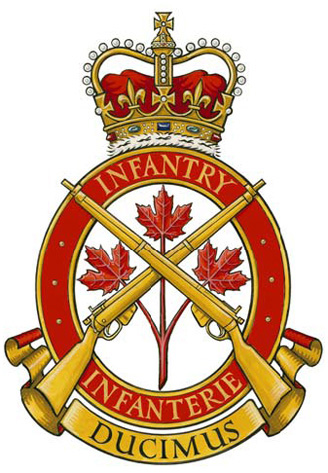