"If your buddies got hurt during that and the yelling and crying, you couldn’t stop, you had to keep going." See below for Mr. Godon's entire testimony. Please be advised that Memory Project primary sources may deal with personal testimony that reflect the speaker’s recollections and interpretations of events. Individual testimony does not necessarily reflect the views of the Memory Project and Historica Canada. 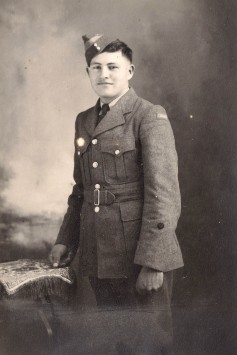 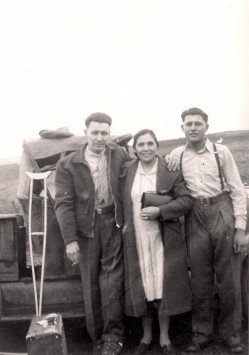 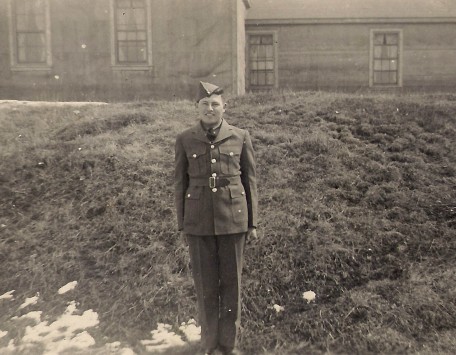 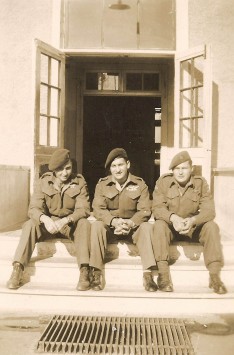 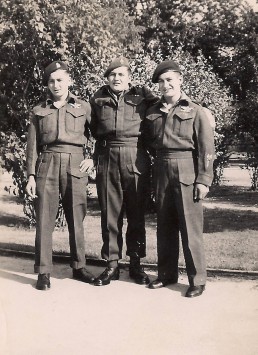 My family life was fairly, you know, because you’re a Métis and they had you, they called you an SOB and that’s a dirty SOB. And we had quite a time to try and get people to understand that we were the same kind of people that they are. But, so I went out working when I was 11 years old. Couldn’t hardly speak a word of English but I made on alright. And I never had no schooling because they wouldn’t take us. There was no school where we were and the school was about three or four miles [away] and they wouldn’t take us there because they didn’t want us people to go in the white school because we were, I just said what we were, what they called us. And I think we were just as good as they were.

We stayed in Aldershot for I don’t know how long because we had special training and we went into Isle of Wight, a place called Isle of Wight, England. That’s where we done our training. That’s where we took our training for … We had to have special training. From there on the Isle of Wight, see I was in with the Winnipeg Rifles, the 3rd Div [3rd Division] We were getting tired, we were waiting and waiting so just when they were going to make the invasion, but - we knew we were going to the invasion but we didn’t know where. So waiting and you started getting restless and finally, one night, they said, well boys, go and do your stuff because you guys are, we’re on our way.

So then we got on the boat, when we got on the boat, we were there for about a good ten, eleven days, waiting again. Because we had a storm. So then we were on the boat and then when they said now fellows, this is our night, go and do your stuff. ... It was two o’clock in the morning. And he said, the commanding officer said, all you guys are good fighting soldiers. You know your job, you know what to, go and get ’em, he said. And he said, and kick butt. So I was doing more kicking butts but he said, and the last thing I’m going to tell you guys while we were all getting on the landing craft, he said, you boys now, I guess you know what you’re getting into. Well, we’ve been waiting for this, we trained for this. And then he said, well, I’m going to tell you something that’s not very good. He said, most of you guys won’t be coming home.

Our beach was in Normandy, France, and Juno Beach. Juno Beach they called it because it was, we made it in June - June 6th. So that’s the beach we took. But that beach, we went a little bit - we landed where we were supposed to land, we landed right in the heart of the Germans with all the, we were supposed to be where there was hardly any. But there were all these machine guns and these big pill-boxes and big boxes filled with cement, box. They’d be about two feet thick and the only way you could get out, get them out of there is sneak, try and get up to it and throw a grenade inside, because they were too thick for our guns to take them out.

From this battle, see what happened, we went in too far and we got surrounded. We couldn’t get nothing in. We had no ammunition and no, nothing, we were out. So we had, we couldn’t fight by empty rifle and they had rifles themselves or machine guns and everything. So that’s how come we got taken. So I guess we could have stayed but we couldn’t, we didn’t have any ammunition to stay to put them back. But we put the Germans back, we surprised them, we surprised them. We let them know we had to fight. We fought all night too, night and day and all night, just to, maybe a couple hours sleep or so. But we had to. There was no other way it was going to do anything but we got caught in there. They were behind us, they were in front of us, they were at the side of us. So there we were. So we were taken prisoner from there.

And then we got into concentration camp, labour camp. What a time. You worked there 16, 18 hours a day and nothing to eat. Maybe cabbage water. What really happened? We were all in the concentration camp, you know, they’d just shove us all over. You know what Hitler wanted them to do? To kill us all prisoners. To kill all the prisoners, if you know we were going to lose the war. But some of them, that was it, they took off, just like before the war was over. So the next morning, we got up and here, gates wide open. And that was a day and a half but yet, we weren’t done yet. Because we could hear guns still fighting, I think it would be around, oh yeah it was kilometres. I think it would be around 12 kilometres or so.