"I was a junior officer with executive responsibilities; and I didn’t have much time to sit around and be concerned about the dangers."

"I was a junior officer with executive responsibilities; and I didn’t have much time to sit around and be concerned about the dangers." See below for Mr. Webb's entire testimony. Please be advised that Memory Project primary sources may deal with personal testimony that reflect the speaker’s recollections and interpretations of events. Individual testimony does not necessarily reflect the views of the Memory Project and Historica Canada. 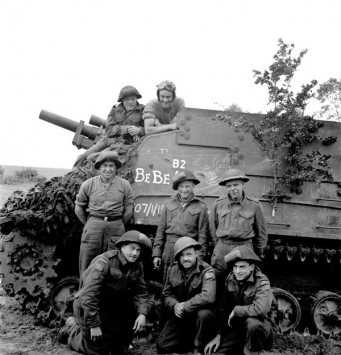 The 3rdCanadian [Infantry] Division landed on D-Day [the Allied Normandy invasion of June 6, 1944] and that included three [field] artillery regiments [12th, 13th, and 14th Field Regiments, RCA]. We [14th Field Regiment, Royal Canadian Artillery] trained most of the late part of 1943 and the first part of 1944. We trained learning how to, we transferred to, instead of the [Ordnance QF] 25 pounder, we had outfits called Priests [M-7 105mm Self-Propelled Guns], which were mounted guns on a tank chassis and they were prepared to [do] two main things. One is, these guns were available to fire from the water sitting on a Landing Craft, Tank [LCT], which is the way we went over. And the other thing was, they were equipped, very well waterproofed so they could drive off the end of the Landing Craft, Tank and go right into action. So this took, in the period building up to D-Day, we were assigned these and learned how to drive tanks, and do all that. So we had a very extensive training period and we went through the training period with the whole south… The whole south of England was full of people preparing for the invasion. We were right in the middle part of it, training. We actually mounted our landing craft about two days earlier, maybe the fourth of June, maybe even the third of June. We were at Southampton; and we were there for, with the knowledge that we were going to invade. As a matter of fact, we were, the original schedule was to go on June the fifth; and I was the OC [officer commanding] troop and with the commander of the craft, the navy guy, we looked at the orders and then they delayed it a day and we thought, oh boy, we’re not supposed to know all that. However, it didn’t do any harm because we went the next day. We had been together, our troop and our, I don’t know how many, we probably had 100 people and we had our four Priest guns plus another tank and some assorted other vehicles, and numbers of people. Anyway, we were out all night once we were established where to go; and I was not as exposed to worry because I was in charge and too damn busy, and people coming up, what about this, what about that? So I can’t say that I had, other than being very keen and excited about going into action, I didn’t have much time. And that applied later. As a matter of fact, for me, it applied pretty well through the war. I was a junior officer with executive responsibilities; and I didn’t have much time to sit around and be concerned about the dangers. Anyway, we did land. We fired from the craft on the way in and it was a very questionable success. But then we turned around and came in; and we landed at H plus 90, which is 90 minutes after the first guys. I was met by our recce [reconnaissance] officer and he took us to our first gun position. We organized a 50thtour for our regiment. This made us interested and we went to France to see what there was for our young children and grown children to see about World War II. We went over and there wasn’t much. So we subsequently followed up and we developed the Juno Beach Centre, which is a pretty impressive operation that runs the year round.