"Then they took me and sent me to a little company, Royal Canadian Engineers, that’s where I was for all the rest of the time in Italy."

"Then they took me and sent me to a little company, Royal Canadian Engineers, that’s where I was for all the rest of the time in Italy." See below for Mr. Steinberg's entire testimony. Please be advised that Memory Project primary sources may deal with personal testimony that reflect the speaker’s recollections and interpretations of events. Individual testimony does not necessarily reflect the views of the Memory Project and Historica Canada. 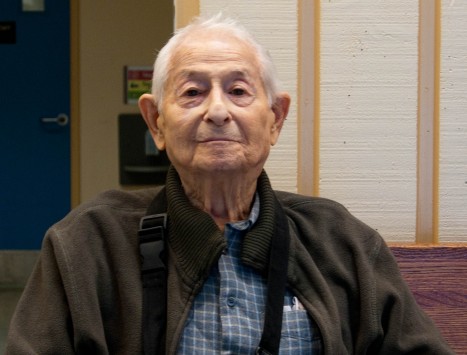 When we hit Italy [during Operation Husky, the invasion of Sicily, July 1943], this big boat, we went into a camp with all soldiers and companies could pick out men if they wanted them. And I was there for quite a while. I met my brother there, he was driving a truck and he’s dead now. Then they took me and sent me to a little company, Royal Canadian Engineers, that’s where I was for all the rest of the time in Italy. The people were good. They had to be good because there was all kinds of Italians there. And the bad people had to behave, the Italians wanted them, they’d take them. We didn’t meet too many of them but when we did, we didn’t fool around with them. Now, I didn’t have no trouble. I was with the major of our company. I used to drive him wherever he wanted to go. I had a good job. We were engineers sort of. We’d blow up bridges, we would build bridges, we’d blow up that, blow up trains, that was our job. We used to go fishing with dynamite. We had our own food truck. They made us the meals, that’s all we had. It was pretty good for us. Nobody bothered us. The major we had, he never bothered us. And then we went from Italy when the war was over [during the transfer of the 1stCanadian Corps to the Northwest European theater at the beginning of 1945], they shipped us to France. From France, we went North, went to Holland. We finished whatever we were doing, what we were doing, still fooling around, fighting. We were bombed two or three times. Then we went way up northwest, on the top of that island, there was a little English country. And the Germans took it over. So the Americans and Canadians got together and told the Germans to get the hell out. Which there was a big meeting about that. I went to the meeting but I didn’t understand the language. Anyway, […] after that, the guy I was driving was a major and he got very sick, very sick, because we were parked after that in a German camp. And him and I didn’t know it at first but then I found out, all these Germans […]. So he got sick about it, got scared stiff. Yeah, he started shake and everything else. So I took him out of there and the funny part of it is, we were no more than 50 yards from the Germans and they couldn’t hear me. Why couldn’t they hear me? Because the jeep I was driving was very noisy but I drove him out of there to a little hospital on a runway down the road and they sort of cleared him up and then they took him back to the camp. And I never seen him after that. I’d like to know where he is. But he was a very good man.