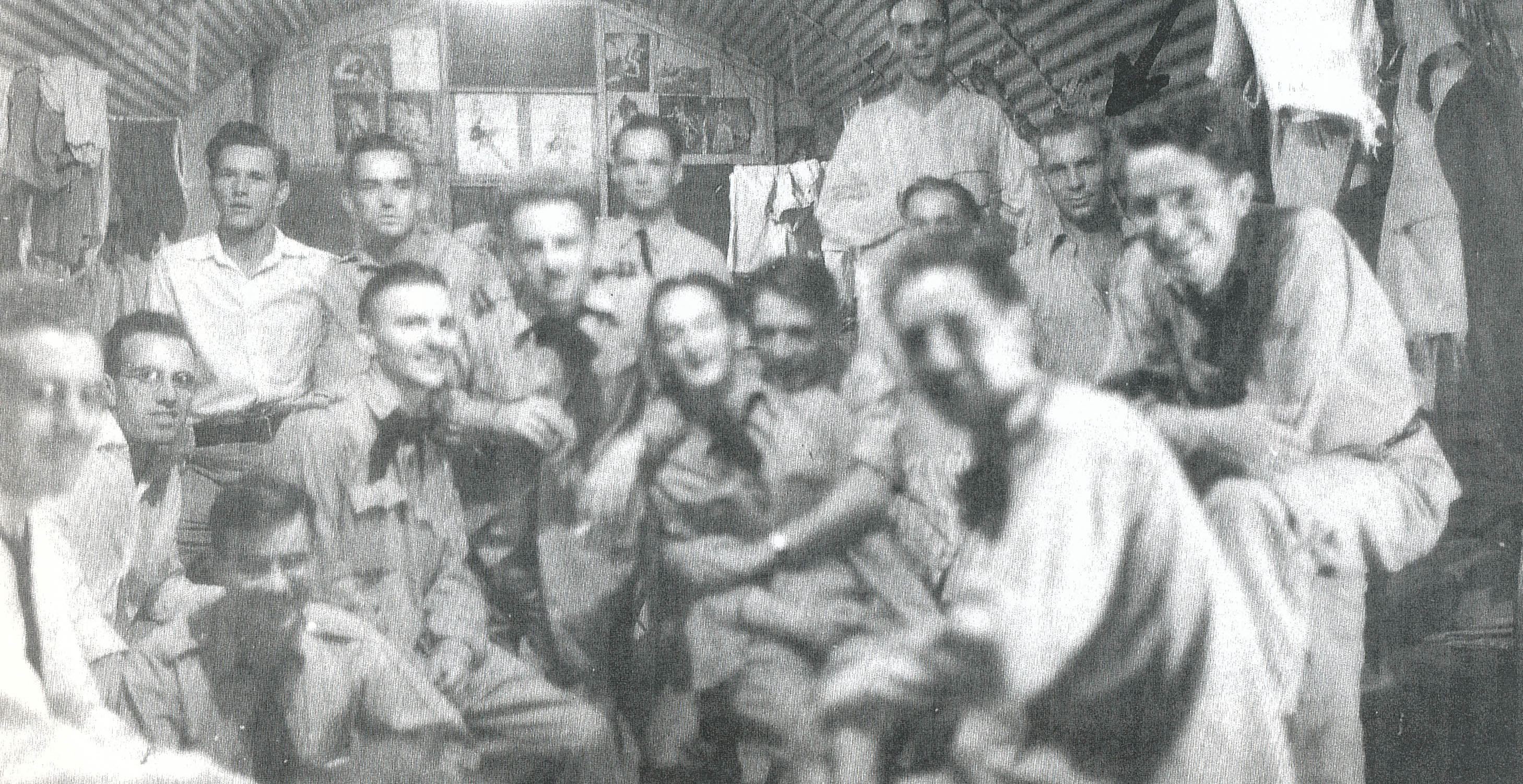 James Mahar celebrates VJ day in West Africa with his friends, he is in the back row, third from the right.
(Courtesy of The Memory Project/James Mahar)

"I got so used to not answering any questions that if you had asked me what time it was, I would have lied to you, and I was very evasive about what I had done and where I had been."

At the time, radar was extremely secret and was for 30 years after the war. You weren’t allowed to talk about it, 30 years after the war. I got so used to not answering any questions that if you had asked me what time it was, I would have lied to you, and I was very evasive about what I had done and where I had been. For example, at Clinton, Ontario, when we were taking the course in radar, you would go down to the town of Clinton, there was a town dance hall. And you’d go down there and you’d be dancing with some young lady in civilian clothes and you’d be dancing along and she’d say, and what do you do in the Air Force? And your answer was that you were a wireless technician, a wireless operator. And you had the flashes on your arm of a wireless operator. In fact, the word radar did not come out until around 1943. Up until then, we were called SE equipment, which meant secret equipment which sort of gave it away. One day, an officer came in, radar officer, and he said, the war has switched locations. The big losses now are off of West Africa because the submarines, the U-boats, were running into a new type of radar that we had called Mark III ASV, which was Mark III, Air-to-Surface Vessels. And this was far more effective than the stuff that I had been working on which was Mark II ASV. It was a big jump forward. And the U-boats were taking a terrible beating off the coast of England, so they switched and they moved down to Africa and off the coast of West Africa came the convoys that were coming from South Africa, America, India, wherever. And there was a regular path going right by Sierra Leone. When we went down to Africa, we had no idea what we were walking into. It is now considered to be the most dangerous country in the entire world, according to the World Health Organization. Not only do you have malaria and leprosy and yellow fever and blackwater fever, different typhoids and so on and so forth, it’s a terrible, terrible place. I was there for a full year-and-a-half and so were the radar types I was with. And we all came down with something. I had malaria and I also came down with a thing called trench mouth [a severe form of gingivitis]. And the trench mouth caused me to eventually lose all of my teeth. It’s a disease of the gums where the gums swell and pull away from the teeth, which leaves pockets for food to get into and rot and you can’t get at it, you can’t brush it, you can’t do anything. And then they would coat my gums and teeth with chromic acid, just about every day and that in turn is a type of acid that is destructive to your system. And they tried all kinds of treatments to try to cure it and they couldn’t, it was incurable. On one station where we were, a station called Jui [in western Sierra Leone], which believe it or not means “swamp of death,” and the area where I was, was called the “white man’s graveyard.” It was also a graveyard for a great many blacks but we used to have to walk down through this field of what’s called elephant grass and, to get to the dinghy, which took us out to the Sunderlands [British flying boats] and [PBY] Catalinas [American flying boats] and it was just a narrow path through grass that was chest high. And I walked that two or three times a day every day for years. And then about once a month, they would set fire to it when the wind was in the right direction to get rid of the grass so that you could see where you were going. And when the smoke started going up, you would have vultures, hundreds of vultures arriving from all directions, sitting in the tall trees, waiting. And as the flames went by, they would swoop down and pick up snakes and there would be hundreds of snakes. And these were where we walked through every single day.