"Their tents had to be all [up] and they threw down their own tents. An officer or a man didn’t make any difference there. If help was required, you gave it."

"Their tents had to be all [up] and they threw down their own tents. An officer or a man didn’t make any difference there. If help was required, you gave it." See below for Mr. Guy's entire testimony. Please be advised that Memory Project primary sources may deal with personal testimony that reflect the speaker’s recollections and interpretations of events. Individual testimony does not necessarily reflect the views of the Memory Project and Historica Canada. 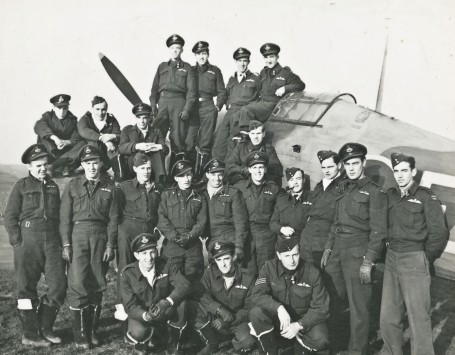 There was three parts to a move. There was the advance party, which I was generally on. I was generally on an advance party. We would go first and be just like an A, or point B, or point “26s,” that was your destination. That was where you had to go. And we would set up the mess hall, to set up the hospital, to set up the things that you had to have first. And it would take us two days to get everything [set up]. Well, then, when the main party came, aircraft didn’t fly those two or three days that it took. And the pilots laboured the same as anybody else to load trucks to get all this [set up]. And then the rear party, they would bring anything that was leftover. Like, if they happened to get a piano along the way, you know, and if we happened to get something that wasn’t that they said wasn’t essential, we could sneak that on the last part of the move. That was on the rear. But the main party, the parties, they laboured, loading. Their tents had to be all [up] and they threw down their own tents. An officer or a man didn’t make any difference there. If help was required, you gave it.

I think we lost two. There was a set of twins that went overseas on 438 Squadron and they went to the place in Scotland to make the wing, they separated. This set of twins, their name was Holmes from Winnipeg. I remember that distinctly. And one was put on 438 Squadron and put the other one on 439 Squadron. They were afraid that if one squadron got wiped out that two twins would be gone. But if one was on each squadron, one would survive. And the one that was on 438 Squadron got killed. And a fellow by the name of Williams, he was from Saskatchewan if my memory serves me right, and they were both killed on the same day. That’s the only two that I can recall that I really know.

We stayed pretty well – we were too new then, too afraid, too scared is how you would put it, to go anywhere. But then time is a great healer. Then we moved to St. Andres and Amiens [France] for only short time in either of those places. And then we got to Eindhoven, in Holland. And we weren’t there very long until the Germans got blamed for breaking the dykes and water came in, and half of the wing, not the squadron, half of the wing lived in tents on little knolls of hills – i where they could get off the water. And those that were lucky enough, if there was an old building they could just sit in the corner. That’s what they called home. In fact, I have a picture here I can show you of one of the ones that I lived in. I had a maid there – but there was a little poor boy, slave labour. He was liberated when he was a – he tried to make... The runway in Eindhoven looked like a river. And he had to move cows that were on the bank of the river, every second day or so, so when enemies fly across, they’d really think that was, like he was taken prisoner of war by us. And he was our… oh, he was a great, great lad. He got to learn a little bit of English. He said, when we drink, we “hacked like hanimules” [acted like animals]. Was his exact… we were animals. Because the aircraft couldn’t take off, when there was too much [water].