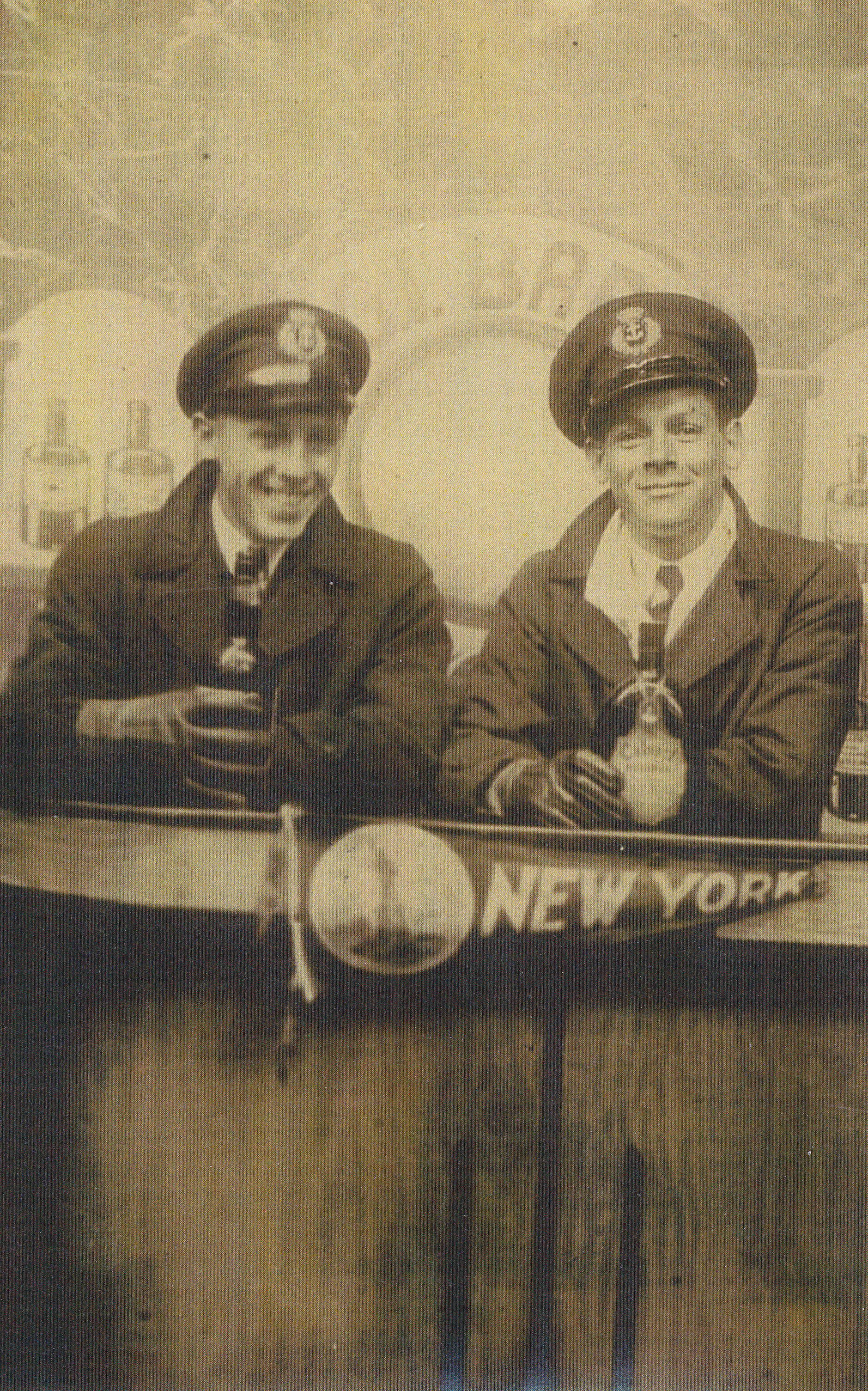 John Covan (left) and Chris, his 3rd Officer during a stop for fuel in New York, 1944.
(Courtesy of The Memory Project/John Covan)

"The submarines would either come up from behind the convoy or wait until a lot of the convoy passed and they would keep quiet and then pick the ships off."

I was in high school in Windsor, Ontario. When the war started, they gave us military training, which meant we were paraded around the football field with a wooden rifle on our shoulder. Anyhow, I joined the signal corps, which I didn’t have to march with a wooden rifle. Anyhow, when I got the academic level required, I went down to volunteer for the air force. And they told me to come back in another few months. I found out subsequently that the reason we were told to come back in a few months, because all their training facilities were plugged up, so they couldn’t accept more recruits at the moment.

In the meantime, I heard about the merchant navy, so I made inquiries and decided to join the merchant navy. I joined in 1942, but I had to wait until they dispatched me to the east coast for training. Here again, as bunks first became available at the training facility, they called us up. We were given 12 months training in seamanship, ship handling, how to handle guns. The navy came and gave us instructions on armaments and after 12 months or 12 weeks, I should say, I was dispatched to join my first ship in Vancouver, a Canadian brand new ship, out of the shipyard, the [SS] Green Gables Park. I was on the ship for the next three years.

Well, we were to the South Pacific and we made trips to the UK also, through the Panama Canal. We delivered this cargo to various ports in Australia. Homeward bound, we were sent to the Fiji Islands and we picked up cargo sugar to return to Vancouver. The second officer we had at the time had been torpedoed and he studied the chart and he thought there were Japanese submarines in the area, that area we were in, was likely spot. So he pulled out 10 miles from our planned course, three ships right behind us, American ships, got torpedoed. Two of them made it to port, one didn’t. We were heading north from the Panama Canal, we got caught in a storm and we ended up with about a foot of ice on everything. This was in December or January. We eventually ended up in Halifax where we regrouped with a number of other ships and proceeded to the UK.

I guess two days out of Halifax, joined up with another convoy coming up the coast and we formed one fairly large convoy and headed across. In convoy in the North Atlantic, all the vessels are blacked out after dark. You were always concerned about running into the stern of another ship, especially with flying spray and misty weather. None of the ships were equipped with radar in those days. We used to tow a little buoy behind the, it was like a water ski with a spout on it, that shot water up, oh, maybe two or three feet. And you’d try to keep that in sight. The ship ahead of you towed one and then we towed one to indicate our position for the ship behind us. And this is the only way we had of keeping track of where we were until daylight.

The submarines would either come up from behind the convoy or wait until a lot of the convoy passed and they would keep quiet and then pick the ships off. One particular case, we were regrouping as we approached the coast of Ireland. I believe the ship that replaced us in that column did get torpedoed.