"The excerpt in English is not available at this time. Please refer to the excerpt in French." See below for Mr. Asham's entire testimony. Please be advised that Memory Project primary sources may deal with personal testimony that reflect the speaker’s recollections and interpretations of events. Individual testimony does not necessarily reflect the views of the Memory Project and Historica Canada. 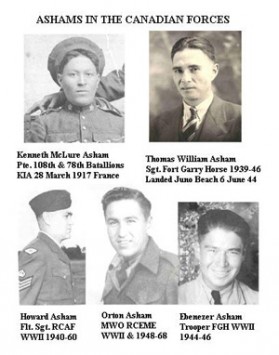 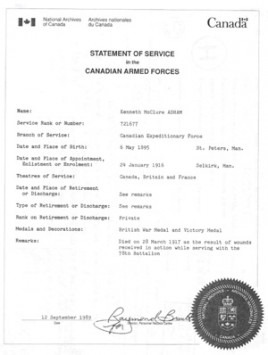 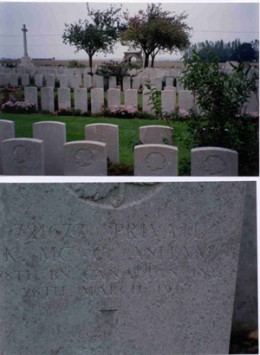 My name is Bill Shead. I’m a member of the Peguis First Nation, and I am a retired naval officer who served in the Canadian Navy for a number of decades. I’d like to tell the story of my great-grandfather’s family. My great grandfather was William Asham, he was a former chief of the St. Peter’s Band, and a former councilor. The St. Peter’s Band was surrendered, I should say the St. Peter’s Reserve, the land the Band occupied was surrendered in 1917 and the people were relocated to what is now the Peguis First Nation.

The interesting story of the Asham family relates to the history of St. Peter’s itself and the surrender of the land. You would think that a community of people that had some injustice done to them might not be willing to serve in the Canadian Forces. But many members of the Peguis Band did serve in the First and Second World Wars and in the Canadian forces after the Second World War.

The story that I’d like to tell you about is William Asham’s son, Kenneth McLure Asham, and six of his grandchildren. Let’s start with Kenneth. Kenneth enlisted in the 108th Battalion in Selkirk, Manitoba in 1916. He shipped overseas to England where the 108th was disbanded. The soldiers were sent to France to reinforce other units. Kenneth was a reinforcement for the 78th Battalion and joined them in France where they were in position getting ready for the battle of Vimy Ridge. Unfortunately, Kenneth was killed in a bombing accident a week before Vimy Ridge, probably in a rehearsal for the battle itself. When they talk about a bombing accident, I believe they are talking about a mills bomb accident, not a bomb accident from an airplane. In Ken’s case, he was buried in Berlin, near Vimy. 90 years after his death, my wife and I were able to visit his grave on a visit to France. It was quite poignant, because it was just a few days before the official reopening of the Vimy Monument.

While we were in France, we took the opportunity to go to Normandy. Normandy is interesting because four grandsons of William Asham served in various units that took part in the landings at Normandy. First, my uncle, Tom Asham, served with the Fort Garry Horse and he took part in the D-Day landings with them. He survived the war, went back to civilian life, but was later killed in a mining accident in northern Manitoba in the early 1950s. Two brothers, Uncle Tom’s cousin’s, Harry Cook and Albert Cook, also served at Normandy. Albert Cook was taken prisoner after being seriously injured. Both Harry and Albert passed away just recently. Harry from cancer, Albert from a long fight with ill health. Just before he died, Albert was awarded a Legion of Honor that France gave to him for his service in France at Normandy.

There were three other cousins of my uncle Tom. They were Orton, Howard, and Ebenezer Asham. Morton took part in service overseas with the Royal Canadian electrical-mechanical engineers. Howard served in the air force and Ebenezer also served with the Fort Garry Horse. Each saw service in the Second World War. Howard and his brother Orton went on in the service after World War Two. Howard retired as a flight sergeant in the air force and Orton retired as a master warrant officer.

You’d think the service would end there, but to follow along with tradition (or happenstance), my brother Tom and I served for 30 years and more. Tom in the Air Force, he retired as a master warrant officer. I was in the Navy and I retired as a Lieutenant Commander. That’s the history of the Ashams, particularly William Asham’s son, 6 grandsons, and 2 great grandsons. That’s just an indication of the extent of participation by people of aboriginal ancestry in the major wars Canada has fought, and also the extent that the aboriginal community had gone to serve in the Canadian Forces. The Asham family and the St. Peter’s and Peguis Bands are not unusual. There are many families who have a lot of history in the Canadian Forces. This is best seen if you take a walk around the graveyard of the old St. Peter’s church, which was the church for the St. Peter’s band of Indians. They have several gravestones of soldiers, and several markers that don’t mark graves but mark the memory of soldiers who had been killed overseas.