"When you join up, you join up to fight, you don’t up to be guinea pigs. But I have no bitter thoughts about that and if it had to be again, I’d do it for my country."

"When you join up, you join up to fight, you don’t up to be guinea pigs. But I have no bitter thoughts about that and if it had to be again, I’d do it for my country." See below for Mr. Link's entire testimony. Please be advised that Memory Project primary sources may deal with personal testimony that reflect the speaker’s recollections and interpretations of events. Individual testimony does not necessarily reflect the views of the Memory Project and Historica Canada. 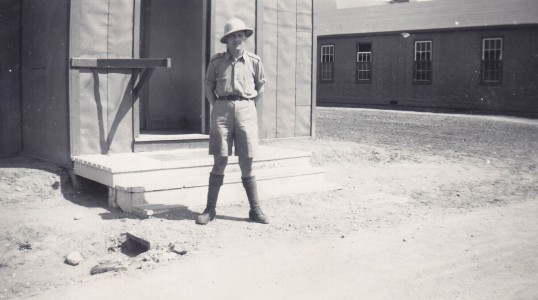 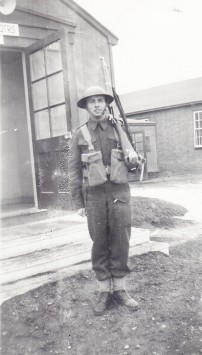 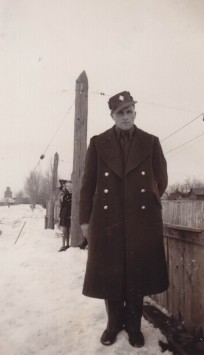 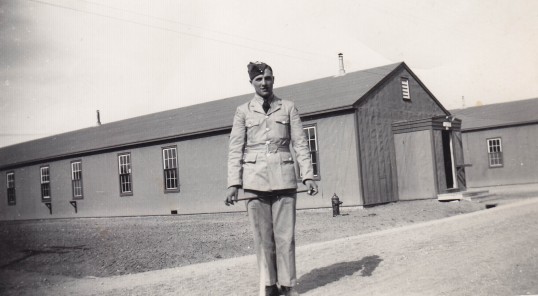 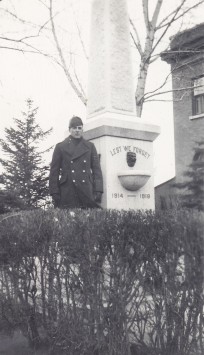 My name is Leonard Roy Link and I was born in Osoyoos, B.C. My dad was with the railway company and moved back to Saskatchewan and we were located in Saskatchewan when I joined up. I got out of high school and everybody else was enlisting, so, in my class, so we all joined up, like some joined the air force, some joined the navy and some of us joined the army.

I got my basic training and then I was made a corporal for drill instructing. And at that time, just before Christmas of 1942, 20 of us men were taken to Suffield, Alberta, to go through the poisonous gas tests. We had no idea where we’re going and Lieutenant Smith came into our hut at night and he says, “I want 20 of you men to be ready to go for a trip tomorrow.” He says, “You be ready to have breakfast at 5:00, be in full military dress, but no guns.” And he picked out 20 of us. He picked you, you, you, you and you and had us be ready for breakfast in the morning which we had breakfast in the morning. And after we finished breakfast, the truck backed up and we got in the back. It was seats along the front of the back and around the side and it was a canvas covered top like on it and the officer and the driver were in the front and away we went.

And when we got out of the truck there, we had to go into this one hut and put our gas masks on and check them to see that they were working properly. Then they released this gas and it was just like a blue fog and we had to march around in that for a while and then the officer said, “Okay, stick your finger behind your mask and take a whiff of it.” Well, I’m telling you, it just hit me and just burnt like extra hot coffee all the way down. It was chlorine gas, that’s what it was, chlorine gas. From the chlorine gas, we were taken outside and marched over to another hut and went in there. And when we went in, we were handed a damp towel and we were told to strip to the waist, which we did. And they said when two officers came along with spray things and sprayed mustard gas on our arms and shoulders. And they says, “Okay, when it starts to burn, you can wipe it off.” Which it burnt, and it burnt good.

Well anyway, we wiped it off, but we weren’t allowed to shower for two days after we had the gas test. And when we got back from that test, the officer in charge of our camp lined us 20 men up and he walked along and talked to us and he looked us straight in the eye and he says, “Now look, you men were on a secret mission, and if any word of this gets back to me what you were doing,” he says, “this is wartime, you’ll be shot right on the spot.”

After going through the poisonous gas tests, my health was just absolutely ruined. Two weeks after we got back, I was admitted to the military hospital in Maple Creek [Saskatchewan] and I had had mumps on both sides and I had double pneumonia and I had scarlet fever and my throat was so badly burnt and scarred from the chlorine gas that I could only talk to the doctors with a whisper. And they sent a telegram home to my folks and said they had me in the hospital and I was a mighty sick young man, but they’d do their best to bring me through, which they did.

The after effects of the gas sent me for a loop. I lost the feeling of my left leg altogether, it went absolutely dead on me and my toenails fell off, they turned blue and fell off. The doctors put me on a gurney and they took my boot off, but not my sock, and they were punching me with something sharp and I never felt a damn thing and they says, “Boy, you sure are a stubborn bugger, you’re not moving at all.” I couldn’t feel a darn thing because my leg was absolutely dead, and when I got back to my hut, I was on excused duty and the hut sergeant brought a basin of warm water and washed my foot because when I took my sock off, it was full of blood. Took my sock off and washed my foot and wrapped it in a clean towel and he went and got me a new pair of socks, which I had. And that I had, I was on excused duty for a week or two and then two psychiatrists checked me out and here I had a complete nervous breakdown. I was just out of it altogether. So they recommended I be discharged for medically unfit for military service, which the next day they took me to Brandon [Manitoba] to get civilian clothes and then I had to pack up my belongings and they put me on the train and sent me home. And that was the end of my military life.

Well, I hoped to become an officer and lead the troops. That’s what I was hoping on. When you join up, you join up to fight, you don’t up to be guinea pigs. But I have no bitter thoughts about that and if it had to be again, I’d do it for my country.