"I didn’t return to Arnhem and the bridge until the 60th anniversary, 2004. I went down a walk on the Wednesday night and I walked along the river, the route we’d gone in, up the approach and onto the bridge and looked down at the buildings we’d occupied that were rebuilt, and it was an eerie feeling. It was strange. It brought back a lot of memories [...]"

"I didn’t return to Arnhem and the bridge until the 60th anniversary, 2004. I went down a walk on the Wednesday night and I walked along the river, the route we’d gone in, up the approach and onto the bridge and looked down at the buildings we’d occupied that were rebuilt, and it was an eerie feeling. It was strange. It brought back a lot of memories [...]" See below for Mr. McCreesh's entire testimony. Please be advised that Memory Project primary sources may deal with personal testimony that reflect the speaker’s recollections and interpretations of events. Individual testimony does not necessarily reflect the views of the Memory Project and Historica Canada. 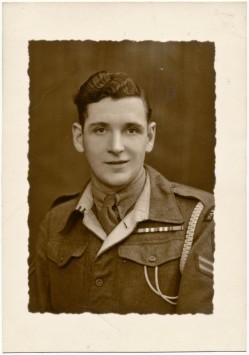 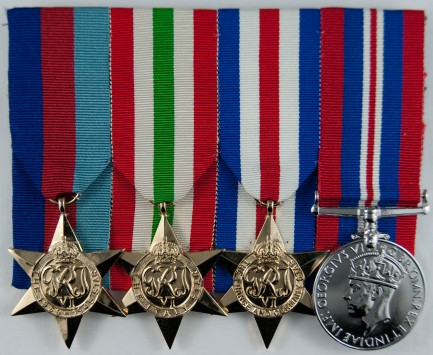 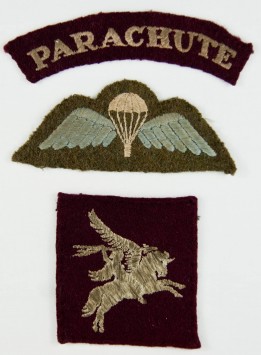 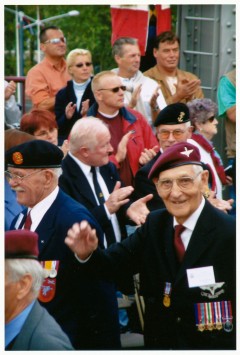 And the objective was to get to the [Arnhem] bridge [over the River Rhine] that late afternoon or evening, capture it, and hold it [during Operation MARKET GARDEN, September 1944]. And the rest of the other troops are coming in later on and the second [airborne] lift was coming in Monday. But that was the objective was to get there quick, take it, and hold the bridge. We dropped with 48 hours’ equipment, but we knew probably it was going to be maybe a bit longer. So we held it for the Monday, Tuesday, Wednesday, after capturing it Sunday night.

We were, got there just as it got dusk on Sunday night, and we went up the bridge, the assault platoon, and we run into a German patrol heavy fire, I guess from the bridge itself. That was when Pete Murray and Charlie Waderlive were badly wounded and I was just slightly wounded, but we had kept the bridge. We sort of, held onto it, but we didn’t cross the bridge at all, we didn’t go over it but we just held to the north end.

As we went in, we stayed on the embankment on the side where [Colonel John] Frost [Commanding Officer, 2nd Battalion, The Parachute Regiment] set up his headquarters. Fortunately, when we got to the first floor and set up the PIATs [Projector, Infantry, Anti-Tank weapon], we were at a dead-eye level with the approach, the road to the bridge.

A patrol tried to get back into Arnhem coming from the French side [to the west], you know, coming back into Arnhem, and they were met with heavy fire from, we had still the 6 Pounders [British anti-tank gun] were there, plus the PIATs. And I know we had one [enemy] tank got through to almost our level and Arthur Rattery hit it with a PIAT and it stopped it. And there was two more further down. We swung round, we hit three armoured cars in that session.

The buildings all around us were shelled on the Monday, and then on the Tuesday, they just must have located, they had observation posts I guess in the town that could pinpoint where we were, and just put a bunch of mortar bombs on all the buildings that we were occupying. That was when we had casualties and when Frost was wounded too, on the Tuesday. And the same on Wednesday. So we kept hoping that [British Army] XXX Corps would get through. But, radio contact wasn’t that great, we didn’t have too much information. We thought, no, no, to heck, we’re going to hang on there as long as we could.

German troops [of the 9th SS and 10th SS Panzer Divisions] were around us, [heavy German] Tiger tanks were sitting on the approach to the bridge and we had no anti-tank weapons left. I returned, I was with a couple of my platoon, Davis and Smith, and we tried to move out of the building into another section, and we ran into arms fire and Smith was hit in the leg. And Davis and I carried him back into the, what was the first aid, the wounded shelter, we walked slap-bang into German troops. They’d come in from the other side. So we just stood there and that was it.

I never did know what the full casualties were of our platoon until after the war, after we got back to England. Well, I know there was five, five out of our platoon definitely, and the wounded, I lost track of how many wounded, probably a good 80 percent of them.

Radio contact that was the problem. The sets, we didn’t have much contact with even the 3rd and 1st Battalions [The Parachute Regiment], who were sort of stuck trying to reach us but couldn’t. They were cut off and we had no communication at all.

I didn’t return to Arnhem and the bridge until the 60th anniversary, 2004. I went down a walk on the Wednesday night and I walked along the river, the route we’d gone in, up the approach and onto the bridge and looked down at the buildings we’d occupied that were rebuilt, and it was an eerie feeling. It was strange. It brought back a lot of memories and the Dutch people, they were just great, I couldn’t believe it. I mean, they couldn’t do enough for you.

I mean, we didn’t cause them any happiness; we didn’t achieve what we wanted. We left them in quite a state when we had to surrender. I mean, it wasn’t easy for them after, I gather. In fact, it was very hard for them. But they said to us, “Don’t worry about that, you did what you could.” And we knew it was the beginning of the end.