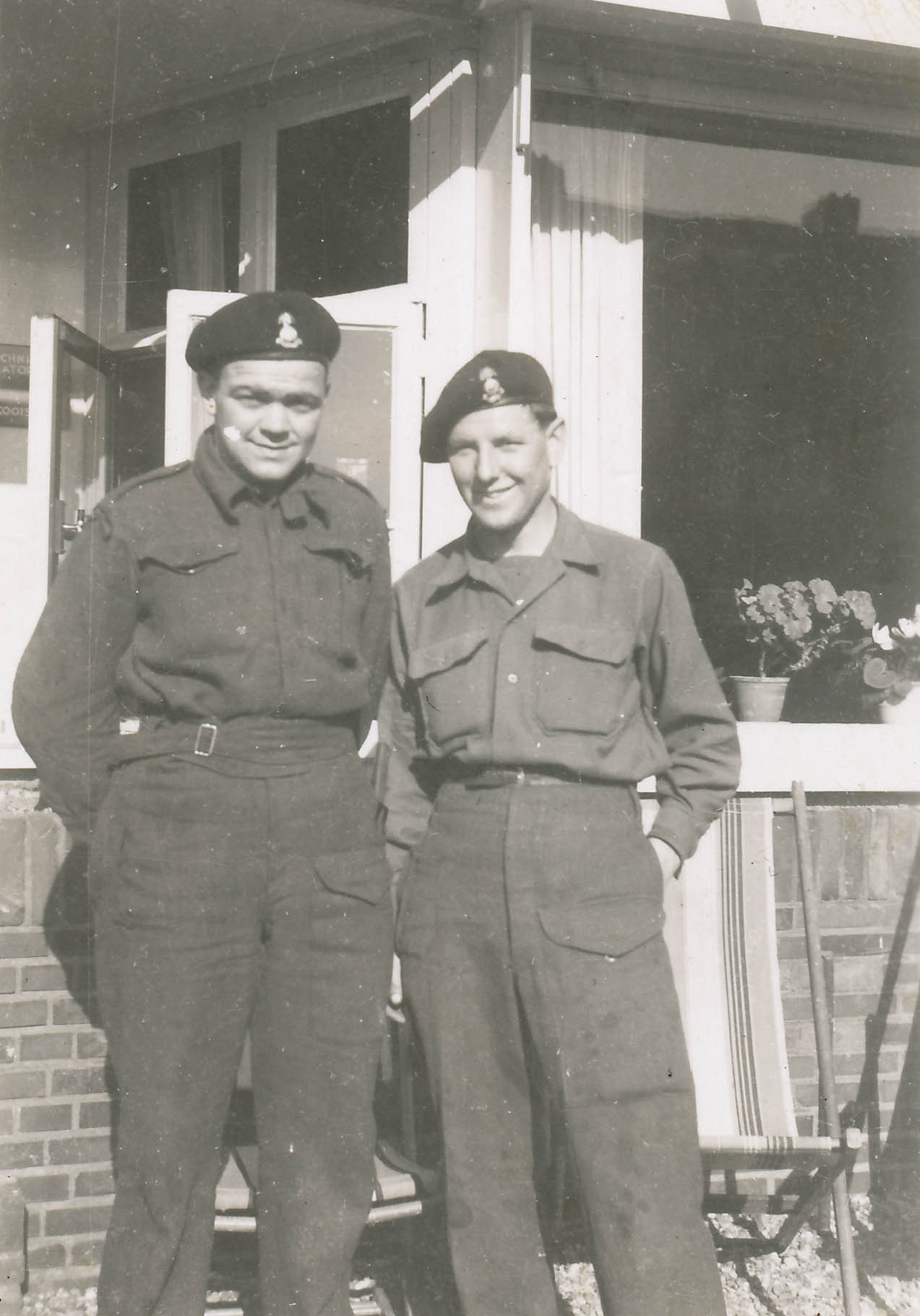 Marcel Montpetit (on right) and a radio operator who was in the same tank. They are posing in front of the house where they rested in Leeuwarden, The Netherlands, 1944.
(Courtesy of The Memory Project/Marcel Montpetit)

"Since we did reconnaissance – we left early to make sure that the German positions hadn’t changed during the night. Once we left, everything was fine, but the hardest part was leaving in the morning. In the morning, you had fear in your head."

We [The Sherbrooke Fusiliers Regiment (27th Armoured Regiment)] landed on the beach at Bernières-sur-Mer [on June 6, 1944, as part of the Allied Normandy landings]. Our goal for the day was to make it to Carpiquet, an airfield not far from Caen. We didn’t make it that far. We made it to Bretteville l’Orgueilleuse. That was the only day we were able to advance. After that, we were stuck. The Germans were very strong and their armoured vehicles began coming in in astonishing numbers. We weren’t ready to fight against the German Tiger tank’s 88 guns. They bombarded us pretty easily. We withdrew and waited for them. They made the same mistake as us, they advanced in an open field. We engaged them. Then they withdrew and retained their rear position, and we kept ours. There were skirmishes here and there. It took about 3 weeks to a month before we were able to make it to the Carpiquet airfield.

We worked during the night with searchlights. They were big lights that we used to locate planes in the sky. They lit up the sky so that we could advance during the night. We crossed through enemy lines. In the morning, we would clean up whatever Germans remained there until we succeeded in closing the pocket.

If we were on the lines, we slept beside our tanks. We were provisioned by trucks that came through during the night so that the Germans couldn’t spot us. We slept pretty well despite the noise. You can get used to anything, you know. They bombed us, the entire artillery was firing in our direction. We had to protect ourselves. We dug trenches. We often stayed there overnight so that we wouldn’t be taken by surprise with an artillery barrage in the morning. We left according to the commander’s orders.

I was part of the regiment’s reconnaissance team. We would leave in the morning to scout out the Germans’ approximate positions. We notified the regiment behind us. Leaving in the morning, before the others, since we did reconnaissance – we left early to make sure that the German positions hadn’t changed during the night. Once we left, everything was fine, but the hardest part was leaving in the morning. In the morning, you had fear in your head. Then, once we were out in the middle of the action, we forgot everything. We followed orders. Still, that didn’t stop us from being afraid. We just controlled it.

I was pretty much the only French-speaker in the regiment. I often acted as an interpreter for the regiment. In the beginning, we didn’t understand the Frenchmen, and they couldn’t understand us either. We didn’t speak the same language. They spoke in a more sophisticated manner, while we spoke more like habitants [French Canadians].

Our main goal was to follow the coasts until we reached Holland. From Holland, we crossed into Germany, heading towards the Siegfried Line. I can still remember the name of the village, it was Leer.

On Christmas Day [1944], I was out patrolling since the Germans had just attacked the Americans in the Ardennes. We were worried that parachutists would come on our side and try to cut us in two between both lines. We were on night patrols all of Christmas and New Year’s Day, in order to anticipate an attack. We were used to that.

I was happy to get back, for sure. But I missed my group. You never forget that. You’ve lived together for such a long time and then all of a sudden, you’re pretty much separated. I only met up with one of the men in our group, about a month after we had returned to Canada. He was from Alberta, and then we never saw each other again after that. The routine of civilian life resumed. I returned to work in the same area where I was before, in Minor [Minor Rubber Company]. I had only worked there for a month and a half [before the war], but that was long enough to retain the right to resume my position.

I didn’t want to go see veteran cemeteries, not when you knew all the misery they had experienced. The parents who had children who died over there and who were buried in France, they were naturally the most interested, as you’d expect. Us soldiers, we didn’t like that very much. Maybe it reminded us of the danger we faced. We weren’t interested in seeing the deceased. We had seen enough. We hadn’t anticipated seeing the fields full of crosses. It didn’t mean a lot to us. We considered it horrible, that’s all. 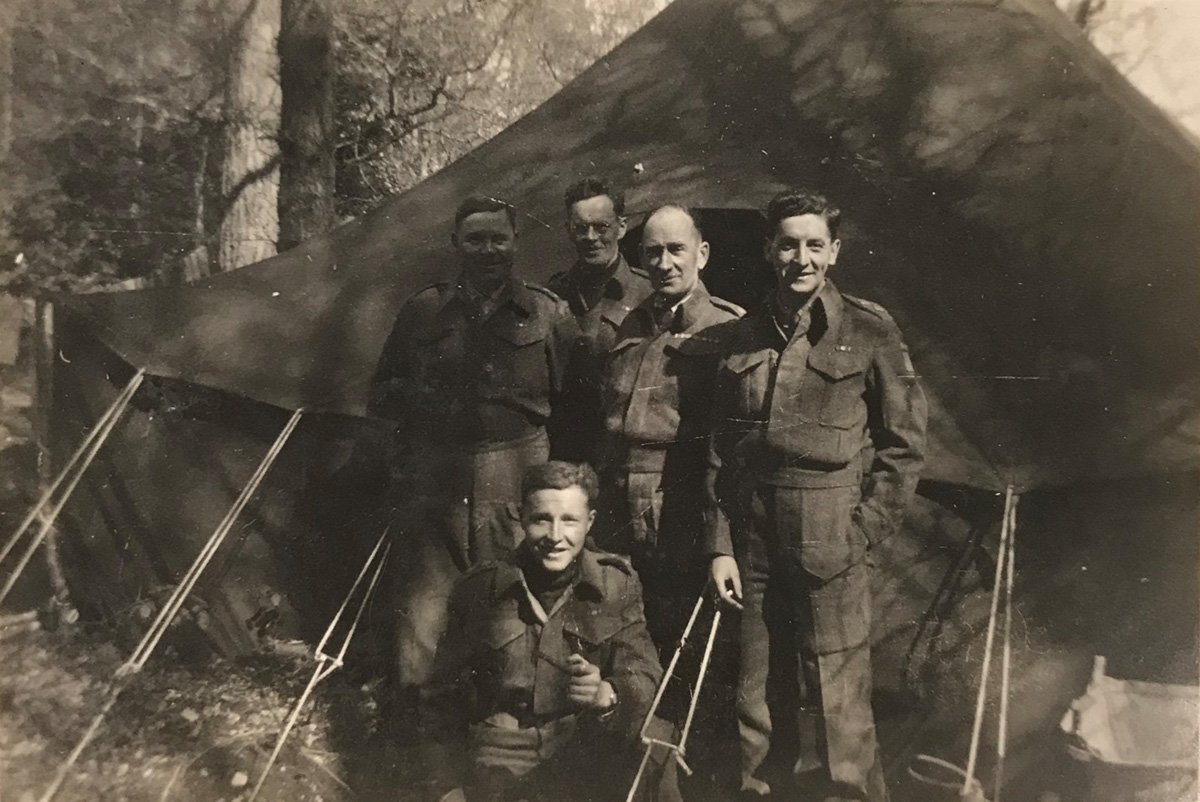