"They hit the Wellington Barracks chapel right on and most of them were killed. I think the band was killed and, of course, if I hadn’t been disobedient, I would have been there."

"They hit the Wellington Barracks chapel right on and most of them were killed. I think the band was killed and, of course, if I hadn’t been disobedient, I would have been there." See below for Mrs. Davies' entire testimony. Please be advised that Memory Project primary sources may deal with personal testimony that reflect the speaker’s recollections and interpretations of events. Individual testimony does not necessarily reflect the views of the Memory Project and Historica Canada. 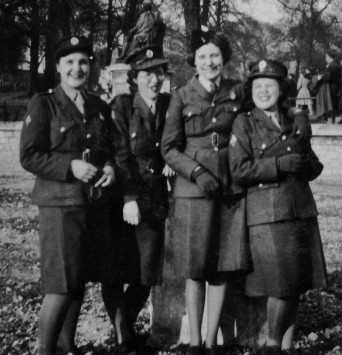 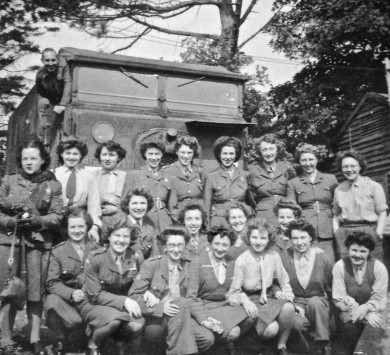 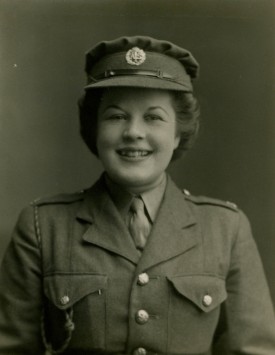 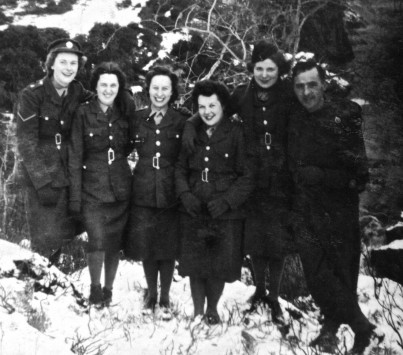 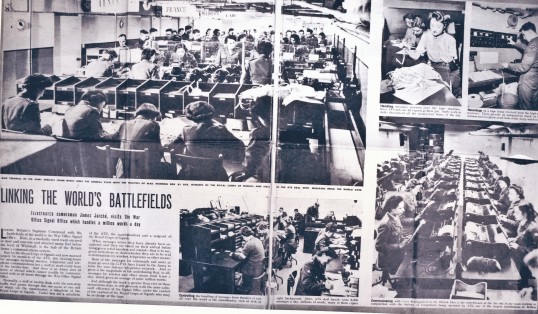 And do you know, they were right. I loved it. It was like learning another language. I was sent down to London [England] and billeted in a beautiful old house. All the old houses there had been emptied and their furniture taken out. And there we went to the war office to do our work. I’d never been to London. I mean, I was a little, I had never been out of the Midlands really. I was absolutely amazed at it all; going to London seemed like going to heaven. I did my test and passed it; and I started to work at the War Office.

We did shift work; and nights and mid-days and sometimes we did a double shift, which was exhausting. And everybody smoked, like mad, to keep themselves awake. They used to say, "come on, Heppenstall, have a smoke, you’ll keep awake;" and I didn’t, and I still don’t. Most girls started smoking there to keep themselves awake, but I didn’t. But anyway, that was that.

There was bombing all the time we were in London. It was very dangerous and we lived in Queen Anne’s Gate. They kept moving us around. Where they thought the bombing was heavy, they moved us to other places, all big houses. But I ended up in Queen Anne’s Gate which was about 10, 15 minutes walk from there, from Queen Anne’s Gate to the War Office. And, of course, when you went on nights, there was bombing starting and it was really quite … Although I thought nothing of it at the time, it was sort of fun. You could hear the bombs coming over. It would come, you’d hear it coming over, but when it stopped dead, you waited a minute or so, and that’s when the bomb dropped. You didn’t have to be under there, so we were running. We’d dart into doorways and steps and run like mad, and then go to the next one with our gas masks and our tin hats, and we got to the War Office. And once we were in there, we’d course into the depths and we were safe.

I found it exciting to come out of my billet and you know, these noises going on and, of course, what the bombers were doing. The flying bombers were doing were trying to get to the docks, put the docks out of order. But, of course, it passed over London and there that was it. But, of course, one of the big attractions was free tickets. When we were off duty, we rushed, I mean, if we were on nights, we had to have a little bit of a sleep - oh, we had hardly any sleep - you rushed to a kiosk in Trafalgar Square where they’d got tickets for all the operas, ballets, shows. And you got them free. And, of course, everybody rushed to get these tickets and for the first time in my life, I saw a ballet and I heard an opera, Labohème. I was just dazed; I was thrilled with it all.

And then came the army, the American Army, later on, the American Army joined in with us as you probably know; and as we came off duty one morning, we came up into the daylight, blinking after night duty, and we could hear in the distance a military band. Well, we were used to that, but this military band was playing Glenn Miller. (humming) “String of Pearls.” Anyway, a military band playing Glenn Miller? And, of course, when they came into sight, they were the first American troops coming in.

But they were soundless, didn’t hear anything except the band. Because when you heard British soldiers marching, you heard they had heavy hobnail boots, clunk, clunk, clunk, clunk. Silent. And, of course the unit, when they got where we could see them, we realized they were American. And the first American troops came in, marching to Glenn Miller.

But one of the exciting things that happened, I told you it was exciting at the time, and I was being terribly disobedient. [I] came off duty. It was a Sunday, I’d gone, been on duty overnight, and Saturday came off, came off duty terribly tired, had a very busy night. Got into my billet in Queen Anne’s Gate; and I looked at the orders of the day and my, no, I had a shock. I was down for church parade, which was at 11:00 and it was now about probably 8:00 or 9:00. And I thought, I can’t go to, oh, after a night I’ve had. But you know, that wasn’t considered. If your name was on the list, you went. So I thought, right, I’m going to be disobedient. I’m not going to go to church. I will not go to church. I know I’ll get punished. I’ll get put on a charge, I’ll get punishment, but it’s worth it. I just wanted to go to sleep. So I was disobedient and I went to bed.

Oh, heaven, heaven, heaven. Usually what you got when you were put on a charge was work in the kitchen peeling potatoes or dirty work scrubbing the officer’s floor or something like that. And I said, oh, I’d rather do that than go to church. Anyway, about two hours later, I was rudely awakened by the most exquisite bang I’d ever heard, shot out of bed under the floor and glass falling in. That was the bomb that came over and bombed Wellington Barracks. And they hit it, right smack on. They hit the Wellington Barracks chapel right on and most of them were killed. I think the band was killed and, of course, if I hadn’t been disobedient, I would have been there. Maybe I would have survived, maybe I wouldn’t, but a lot of our teleprinter girls didn’t make it. The teleprinter squad went and I wasn’t there. It was a terrible, terrible slaughter at Wellington Barracks. It’s only about a 10 minute march from Queen’s Anne Gate. So there was a lot of shifts missing and all that. But that was just a terrible thing to happen.

But this is when I started to realize that war wasn’t all fun. I don’t think I thought I was fighting for my country. I just wanted to get away from home. But, of course, I realized there was more to it than that and, and I still, well, I can’t understand why we can’t come to peace. I’d do anything, anything in the world to bring peace and get people to talk instead of fight. That’s what it did to me. It changed my life. It changed, it changed my way because I had lived and I had grown up. And in many ways, and this is a funny thing to say, I had the war to thank for my growing up a well-balanced person. I do see other people’s problems now. I do understand the cruelty. The thing I hate most is cruelty and what is war but cruelty.