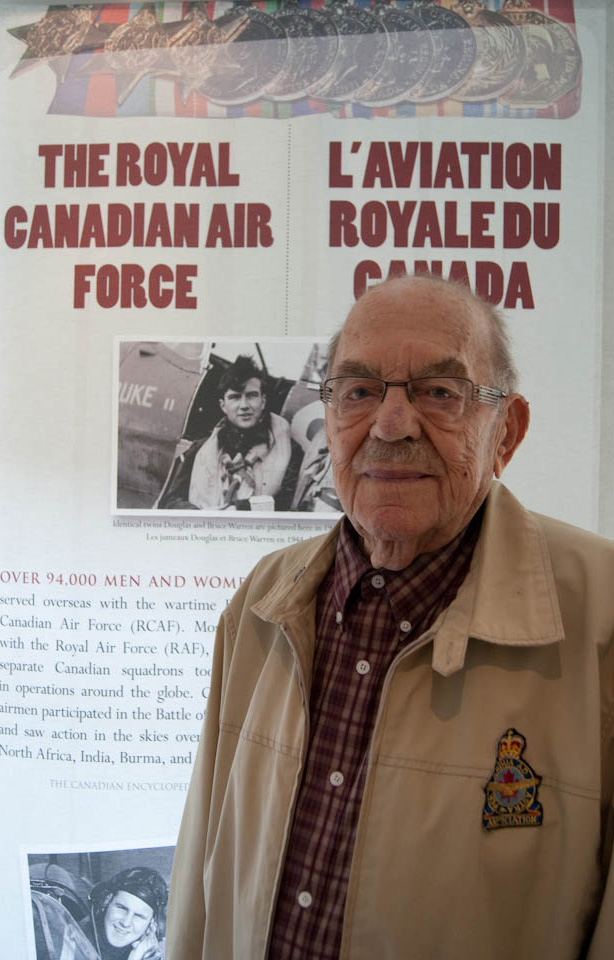 "We would start at fourteen thousand feet, we would see our target and we would swoop down, one after the other."

I was a pilot on the Fairey Battle, the Tiger Moth, Harvard and Yale [aircraft]. The Yale was a French plane. I was a pilot on all kinds of planes. They told me, take that plane and fly it to such-and-such a place. I did that for seven or eight months. Then they sent me overseas [to England]. Once there, we started on the [Miles] Master, a single-engine plane. After five or six weeks, they sent me to a British squadron, 245. We were on Hurricanes. We did the night shift, why, I don’t know. I was stationed in Scotland. We would fly up to ten thousand feet and see that the Germans were up to twelve thousand [feet] and we couldn’t get any higher. When we came back and one or two planes were missing, they never said that it was the Air Force that had shot them down. They said, good thing we have the Air Force. People really liked that. After 1942, they introduced the Typhoon since the Hurricane wasn’t cutting it. Just prior to the invasion, they asked us to do some strategic bombing. I made two trips on D-Day [the invasion of Normandy, June 6, 1944]. There was one thing that our two squadrons did; and maybe more. They would ask us if we wanted to go to Paris. When the clouds were at 500 feet – we would be lower - when the weather wasn’t good, we would leave two planes at a time and they wouldn’t see us coming. We would attack the railway marshalling yards about once each month. We could blow up all kinds of merchandise with our bombs and cannons. I went to Caen. We were there for a few months. Then we went to Brussels. I finished my service in Eindhoven, Holland. I did 125 sorties on the Typhoon. Towards the end, I really liked it. You had to get used to it, but I did 1 500 flight hours on the Typhoon. That’s when I really liked flying. It was a plane that you had to take charge of. We fired bombs, dropped our bombs and we did nose-dives. We would start at fourteen thousand feet, we would see our target and we would swoop down, one after the other. They asked us - and I struggled with this - to target the bridges. I was in charge. I said to myself, why drop down right in the middle? We should attack from the sides. The Army would regularly ask the Typhoons to attack tanks at specific locations. We would leave and go bomb there. The Army liked us a lot.