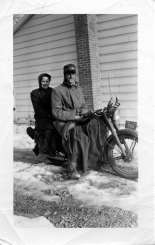 Norman and Edith in 1953, on a B.S.A. 250 from Tasmania, bought via York, UK, to Montréal.
(Courtesy of The Memory Project/Norman Wrigglesworth)

"My next ship was an aircraft carrier called converted to a troop ship... It was a real luxury."

My name is Norman Wrigglesworth. I was an Able Seaman in the Royal Navy from '43 to 1947.

We were always short of food at sea and we did not have much refrigeration. The living quarters were very cramped. At breakfast time we had bread and jam and tea and then we used to pass the potatoes around and each man peeled one potato - this sounds funny - but, no water, and then the cook of the day put 'em in a pot, take 'em to the guy that washed 'em, cut them up and prepare them for dinner, you see.

At sea we never got a full eight hours sleep. Usually three hours and fifty minutes, 'cause we did four-hour watches. Then if action stations went, that was the end of that.

Towards the end of the war we were docked in Taranto, Italy and we went to a Commonwealth rest camp in Bari. There was mostly Australians and Brits, very few Canadians. But we had three big meals a day and we only checked once a day.

My buddy and I used to get horses, there was no saddle or no stirrups, so we went half a mile away to a GI camp to give equestrian lessons for a bottle of wine. That was my fee. I used to cup my hands and said to GI Joe, "Now you put your right foot in my hands." And I swung him over the back, facing the horse's ass or facing the rear end. There was a hundred troops in a three storey brick building laughing like hell. The 'Royal Performance' they call it. We actually got nine days there because when the war ended we couldn't get a train back to Taranto.

The troops went crazy VE Day. Some got drunk and cut my blanket into five pieces and set the place on fire. I saw the Commanding Officer and the man who did the damage had to buy me a new blanket.

When the war was over, thousands and thousands of prisoners of war were transferred to the south of Italy. We finally got a train going south and we stopped every hour for the prisoners to use the toilet, so there's no toilets in box cars. All the Aussie troops stood guard. There seemed to be so many spool-ends to the mainland and we kept stopping and stopping for more pit stops.

When we went back to the UK through the Bay of Biscay, it was so rough, half of the crew was seasick. Seems funny when you've been at sea for eighteen months like I'd been. But it was so rough. My next ship was an aircraft carrier called converted to a troop ship, where we slept in bunk beds and went from the cabin down to the dining room to have our lunch. It was a real luxury.

I made one trip to Australia and back and one trip to Ceylon and back, one trip to Hong Kong and back and my final trip was to Canada. The Captain addressed us all, he said, "We don't want anyone with bronchitis 'cause you've got to be an ambassador for the British ... and behave yourself when you go to Canada." So, I was a good boy, I went to Canada with a war bride. It was very interesting. We brought about 500 war brides here. This was in October, '46.

We had an agreement with United States that we could not sell any parts of the planes which we put on the ship and they ditched them overboard. It was called a lease-and-lend agreement and the skipper called us all on deck, he said, "You can help yourself but, if the customs catch you when you get home, that's your problem." So I never took nothing 'cause I didn't have any tools. But, it was a shame; all those brand new planes ditched in the sea, but that was the agreement.

Then in Norfolk, Virginia, I had missed a bus and a US Navy officer gave me and my buddy a ride, then asked me for a dime to put in the post. And I thought he was crazy. This is the first time I saw a parking metre. Parking metres were only invented in 1936, this was in 1946. And there was none in England and I didn't see none in Canada.

The next cultural shock was when I was on a train to New York. When the Navy said you can order anything you like and this coloured waiter brought me a cup of hot water. I said, "Sir, I want tea not hot water." He said, "Hey buddy, you see that little thing there? That's a tea bag, you dunk it in your cup and that's tea." I thought he was pulling my leg, but that's what it was.