"I tell this to anybody, they laugh and say, overseas, you went to Newfoundland? I said, yes. Because it wasn’t part of Canada then."

"I tell this to anybody, they laugh and say, overseas, you went to Newfoundland? I said, yes. Because it wasn’t part of Canada then." See below for Mrs Henderson's entire testimony. Please be advised that Memory Project primary sources may deal with personal testimony that reflect the speaker’s recollections and interpretations of events. Individual testimony does not necessarily reflect the views of the Memory Project and Historica Canada. 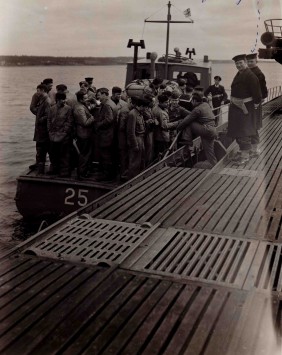 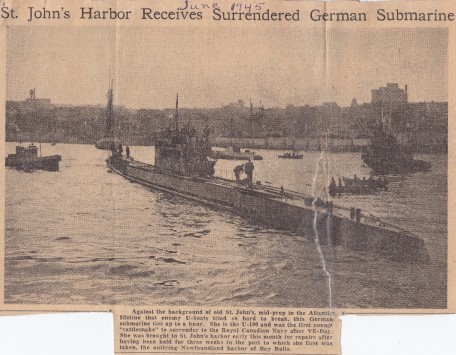 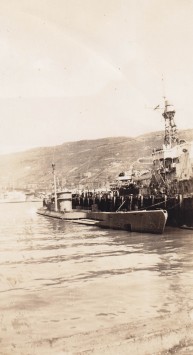 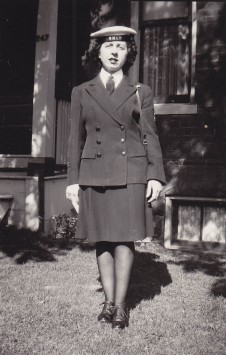 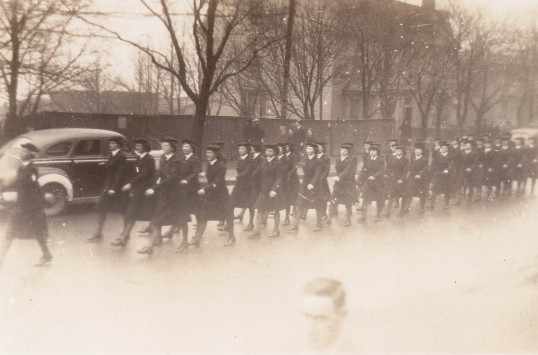 I’m Olive Henderson and I was born in Toronto, Ontario. And I grew up in Toronto. I spent all my life there until the war years. I went to public school there and I went to United Church. And I went to Central Technical High School. We heard about the war starting and that, you know, and in other countries and in England they were starting up a ladies organization for the navy. And they were called, the Women’s [Royal] Naval Service. I thought, that would be interesting. I heard that they were going to be starting them up in Canada. So I thought, oh, I’d like to join that, I was always interested in the water and ships and all that, you know, wherever there was water. We didn’t live right down near the water but I was interested in it, so I thought, that would be very interesting. When I heard that they were going to start, there was an English lady coming over to start the Women’s Royal Canadian Naval Service, so I wrote about it or phoned about it or whatever it was at that time, they answered me. I was sent to Galt, Ontario [now Cambridge], where they were training the girls, the ladies for their service with the Canadian Navy. So I went up there to Galt, I joined. I took my training there, was there for, this was in November of 1942. They gave us a choice of what we would like to do. So we made a list of different things that we would like to do, where we would like to work and with the navy and we could be, well, they had clerical work and they had nurses, people that worked in the kitchens, you know, with the food. They had motor transport people. They had all kinds of positions for them. Or working in stores. So I wrote down that I’d like to be a coder, I thought that would be interesting, to code messages from land to the ships and that. So we didn’t always get what we wanted to be. And they put me in the, what they called the central stores, because I had been working in a store. In the central stores, that was like a hardware, to do all the hardware or anything that the ships needed, that was considered in the central stores. There was also people that worked in the clothing store, they used to fit the people coming into the service for the first time or have, when they needed new shoes or clothing and that, that was the clothing store. So I was put in the central stores. And I was sent on a, on a four week course in January to Niagara Falls. We stayed at the Fox Head Inn, we were treated like guests, it was lovely. And I thought, oh, first four weeks of my service and I’m treated like a guest in a hotel. But we had, every morning, we had to go out on parade. And we paraded along the road there, right overlooking the Falls and it was in January, remember. It was crisp and cold and we were dressed warmly though, so we really enjoyed that crisp, cold walk along the, every morning, before breakfast. I got a posting down to Shelburne, Nova Scotia. That was kind of a relief from just being inland for so long. I thought, well, this would be more like being in the navy, being down there on the East Coast. And that was right on the coast of, you know, Halifax. So when I was sent down there, there was just another girl and myself and there was just the two of us. We had to stay with the army girls in their barracks, Canadian Women’s Army Corps. So the two of us lived with them. And then we got a ride each day over to where the navy base was, to work in the offices over there. So we were the only two WRCNS in amongst all these army girls, they were mostly from down there at the East Coast. We did get along very well with them. In the summer I guess it was, we got a chance to sign up for overseas. And I thought, gee, that would be interesting, I’d never been overseas and I had a lot of relatives in England and my girlfriend that I was with down there, she had relatives in Scotland. So we thought, oh, that’s great, we’ll sign up for overseas, so we did. So when our postings came through, she got hers to England I guess it was and I got my posting to Newfoundland and every time I tell this to anybody, they laugh and say, overseas, you went to Newfoundland? I said, yes. Because it wasn’t part of Canada then. One day, we saw a big ship come in, I forget what kind it was, but it had a big hole in the side of it. And another day, we had a German submarine was brought in, that was in the spring, that was in May I think. I was there for a year, up in Newfoundland. Where we lived, it was up on the hill where we used to drive down in a little truck down to the harbour. Then we had to go, our building where we worked was in the base naval stores building, big building on the south side of the harbour, so we had to go across there on this little harbour craft, it was like a little tugboat. And every day, we went across there to work in the stores over there. Everything was very interesting.