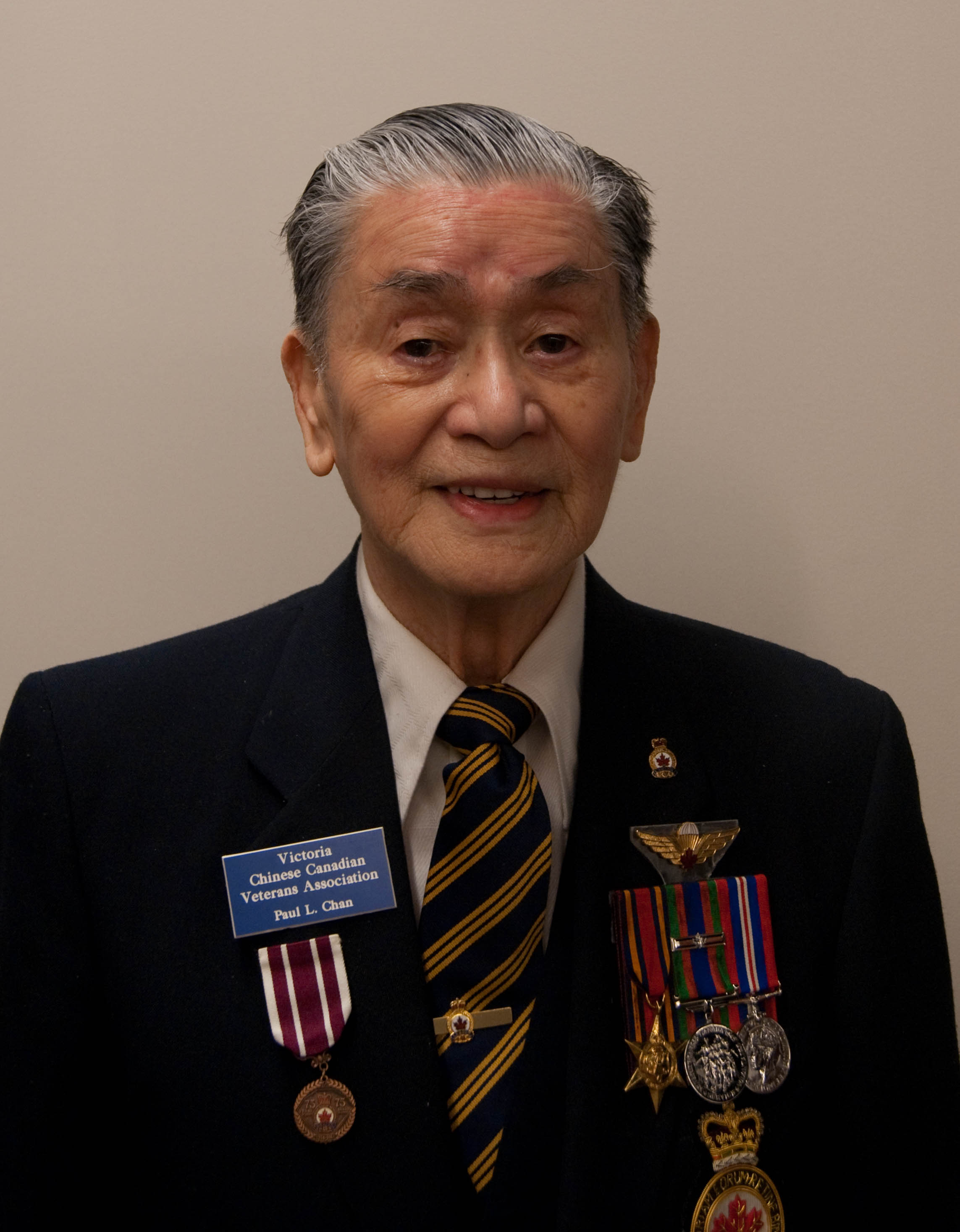 "” So Major Nichol and Major Kendall said, “Oh, Ken, I’ve got lots of Chinese born here, speak two language.” So we were drafted, over 300 of us, to fight."

Well, in 1942, we went to the armoury and joined 16th Scottish for two years. [Note: The 16th (Canadian Scottish) Battalion fought in World War One. For World War Two it was merged into The Canadian Scottish Regiment (Princess Mary’s.] After that, Lord Mountbatten, British Mounbatten asked Chiang Kai-shek can he borrow some troops. He said, “No, I can’t give you any troop.” So Major Nichol and Major Kendall said, “Oh, Ken, I’ve got lots of Chinese born here, speak two language.” So we were drafted, over 300 of us, to fight.

In Egypt, we went to Cairo, Persian Gulf and then the north of India, Karachi. After that, we stayed there one night, fly down to Bombay [India]. Bombay, we took the truck to Pune [India]. We stay at, near the lake there with the Quonset hut, two in a room. We stayed there for a while and then they said, “Oh, you’re going up north.” They pay us and on a train for two days to go up to New Delhi [India]. So we went up to New Delhi, so one night there, and then we go to the, the British Pay Corps camp there. So we go there, stay at one of the place, so we learned to be a wireless operator.

So we were there about two months. So I asked the sergeant, “How long you take to take this course?” He say, “Six months, they really push us fast.” So add another month and then after that, we went down to Calcutta airport, that’s where we had a parachute wing. They said they cut out the, used to be go by submarine at night to the enemy line, see what they have. So we had one day in a hangar, two day jump and one night jump and the sergeant said, “Put your wing up now.” So we saw these Ghurka [people group living in Nepal and northern India]. They were really nice husky guy. They got a sword there and the Japanese afraid of them. They go at nighttime and dress like a baby wrapper and they find out at nighttime, these patrol, they chop their head off. So they worry about these Ghurka.

So we went down to India, down to the end and then take the ferry to Ceylon [now known as Sri Lanka], it used to be called Ceylonti. And then from there, Colombo [Ceylon] and then the truck take us to Camp 25. That’s the Allied force, British, Canadian, the Chinese, the Dutch I think. So that’s where we team up there. And what I heard, I was called up the one time, team up. So they said, “You can put one stripe then. Next time we call you in again,” he said, “you put another stripe.” But the third time is three stripe. But before that, they told us we are eligible for at least an officer, but I don’t see it. I saw a British private come in, he went out as a lieutenant, but not us. We only a sergeant. But what I heard, we had $200 danger pay, $500 Japanese counterfeit, $200 Malaysia Singapore money and five gold coin.