"If he was black or French or whatever, and you reach down to help him out of the water, you don’t say to him, oh, I’m not going to get him up, he’s not one of us. No."

"If he was black or French or whatever, and you reach down to help him out of the water, you don’t say to him, oh, I’m not going to get him up, he’s not one of us. No." See below for Mr. Hope's entire testimony. Please be advised that Memory Project primary sources may deal with personal testimony that reflect the speaker’s recollections and interpretations of events. Individual testimony does not necessarily reflect the views of the Memory Project and Historica Canada. 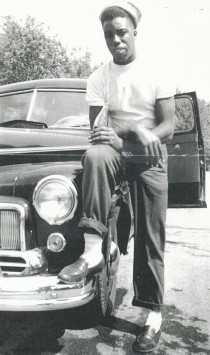 "If he was black or French or whatever, and you reach down to help him out of the water, you don’t say to him, oh, I’m not going to get him up, he’s not one of us. No."

I first joined the merchant marines, it was in 1944. And what happened, I was working in the sugar refinery down here and we used to go up at dinnertime and have a lunch break. So well, the sugar refinery sat right by the wharf there, it was a big company, big building by the wharf. And the boats used to come in there and tie up. I was up there one day, on the roof, looking out at the ships coming in; and I said to one of the fellows that was with me, I think his name was Fred McIntyre, I said, Fred, you know, I said, I think I’ll go and try to join one of them ships and see the world.

But on the ship when I joined it, we had what they called DEMS [Defensively Equipped Merchant Ships]. We had a 12 pounder [forward naval gun] on the back of the ship and a nine pounder [naval gun] on the front. And these DEMS, and we had Oerlikon guns [anti-aircraft and anti-submarine autocannon] and [M2] Twin Brownings [anti-aircraft heavy machine guns]. And they were there to protect our ship. Now, our ship also carried at that time, they carried torpedo nets, that when we got out as we were sailing along, we put those nets, swing the boat over the nets on them and, and that was to protect them in case the Germans or Japanese, whoever fired the torpedo at us, from the submarine, that was no help because the person would just blow the net wide open and come on in. But that was just gives you that false security. You say, oh boy, you know.

But, anyway, we went from Capetown [South Africa], with 30 days in the water. We went from Capetown to East London. From East London to Port Elizabeth. From Port Elizabeth to Durban. We went up there and we unloaded the cargo, tanks, jeeps, ammunition, you name it, everything. And sometimes we had to go to work and chain the cargo down there on the deck; and we had barrels of oil, gasoline, everything. You can imagine that’s what we went across there with.


It’s just like [Winston] Churchill said. If they had have stopped the merchant navy, most likely Germany would have won the war, he said. And that is true. Because we took light ammunition, the food and everything else. And you know, and not only that, but we supplied food and stuff to Russia too on our Murmansk Run, going up to Russia. You know, that’s what I say. If you, that was our only downfall. If you could have stopped the merchant ships going to England, they’d have won the war.


I remember I was in Liverpool and the American army coloured guys were there and they had all their army was all discriminated. And that didn’t stop them until I got in Labrador here in 1951, I think. That’s like a question a guy asked me when I was up on the [Parliament] Hill there. And you know, one of them politicians, I forget who it was now. I talked to a lot of them. They said, tell me this, did you ever run any discrimination in the merchant navy? I said, I’ll tell you this. I said, when you’re on a ship, I said, everybody don’t look or don’t, they don’t look at your skin, they don’t look it. It’s the same as this. When a ship got torpedoed and you’re on a life raft or on a boat, and the guy happened to come up and if he was black or French or whatever, and you reach down to help him out of the water, you don’t say to him, oh, I’m not going to get him up, he’s not one of us. No. There was no discrimination. We was a real tight group of people. And that’s the way it always remained all through the war. And that’s what I liked about it. There was no discrimination whatsoever.