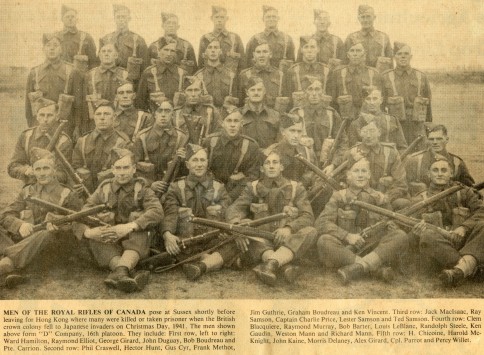 I remember the night that it [the battle of Hong Kong] was all over. There’s no fatigue like battle fatigue and I was worn right out. And I fell asleep at a place called Stanley, on the Stanley peninsula in Stanley Barracks. Sometime during the night, I heard shouting and I said, what’s going on? And somebody said, the [battle] is over. And I said, it can’t be because we had been told that there would be no surrender, not without a fight - it was over. It was over. It seems that the governor of Hong Kong had signed some kind of a surrender [to the Japanese, on December 25 1941 when Allied positions were overrun]. Maybe it was a good thing because I wouldn’t be talking to you today if it had continued.

In [a prisoner-of-war camp in] Hong Kong at first, there weren’t any workgroups but then they started with workgroups and that again was good for me. Because when you’re working, you can’t brood or … And we worked a bit at Kai Tak airport [under the Japanese, prisoners of war laboured to expand the airport, building runways]. I know it was work for the Japanese but then we were moved out. We went on ship up to Nagasaki, went to a little place called Fukuoka. And at Fukuoka, we went to work in the coal mines. And that’s where I spent the … And I was kind of looking after safety down in the mine. A coal mine is different from ordinary mines. You drive a tunnel through and then you work the whole side of the tunnel. So your big problem is with keeping the roof up. And that was one of my jobs, to make sure that the roof stayed up.

We didn’t deal with the guards very much. We had an awful lot more to do with the bosses in the mine. And we drew a miserable old bastard and we had a French chap with us and he nicknamed him “Ti-vieux”. And that’s what he all went by, still don’t know his name. But “Ti-vieux” it was. That in French I guess is “little old [man]”.

The war ended, I wasn’t really in the mines when the war ended. What happened, we had our rest day about every two weeks. And right out of the blue, there was a rest day called and we couldn’t figure that out; that wasn’t normal at all. And rumours were always floating around and the rumour came in that the war was over. And it was over [on August 15, 1945 Japanese Emperor Hirohito announced the surrender of Japan]. And it was a month there after the war was over before we got back.

Guards in [the camp] that were abusive just disappeared. And the other ones, there were some Japanese -even though they were enemy - that were decent to us. But there was some in it that weren’t too good. That old bastard, I hunted for that old bastard that looked… because he was responsible I felt for some of the deaths. But he was always gone.

The Americans had came and they were told that there would be transportation supplied and it was. And we took a train, went down to a town called or a city called Nagasaki and there, we got onboard an American troopship. And we went to Manila, in the Philippines. And the Americans were wonderful hosts. They sure treated us wonderfully.

I had the misfortune in prison camp of sleeping on the floor with a man that died of tuberculosis. Now, with no food or very damn little food and starving to death, and him, I can still remember how he coughed, oh God, and I had a whole lot of lesions on my lungs when I came back. Now, they never got any active, but I was hospitalized.

I have trouble even to talk about this but after, the thing you long for most when you’re a prisoner of war is freedom. And when I came back to Canada, I was hospitalized. And for a little while, it was alright. I was hospitalized in Montreal. My girlfriend was in Montreal. It was not too bad. But then they moved us down to a little French place called Saint-Hyacinthe. And to make matters worse, right across the ward from me was a First World War veteran that had been in hospital 28 years.

We had some understanding doctors. There was one by the name of MacDonnell or McDonald. And I talked to him. And I asked him if I was contagious, he said no, we’ve not got anything contagious on you. Well, I said, I’m leaving. Oh, he said, you can’t leave, you’re sick. I said, I’m going to be mental too if I have to stay here. I said, after all that prison camp time, I’ve got to be free. And I left.