"Some were conscientious and they did their bombing as much as possible on the target that was assigned to them. But I’m sure that some of those bombs, they got rid of them to get the hell out of there."

"Some were conscientious and they did their bombing as much as possible on the target that was assigned to them. But I’m sure that some of those bombs, they got rid of them to get the hell out of there." 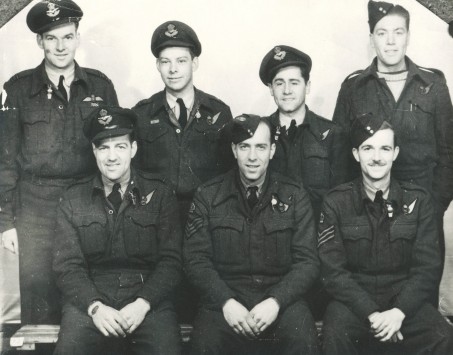 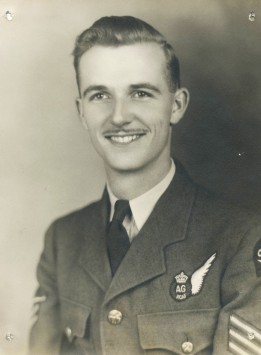 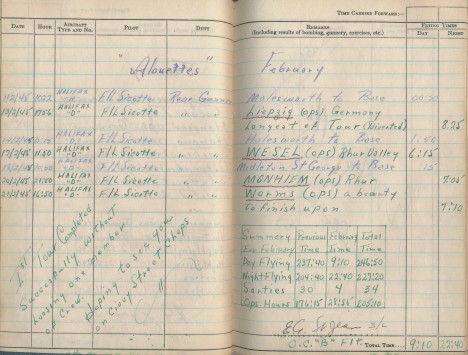 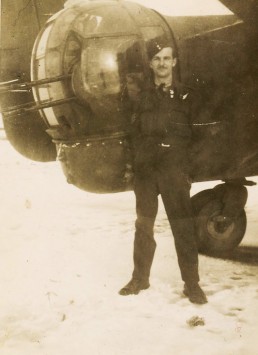 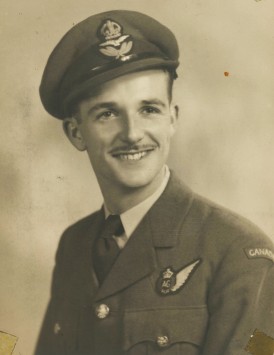 My short name is Rudy Lavoie of course. I was born in Campbellton, New Brunswick on April the 4th, 1923. We started to bomb in August I think, or thereabout, so this was, we had, when you weren’t bombing, you were doing some other practices. You were, you never were idle. They always had a job to do. You had to take that aircraft out, you had to fly around, you had to, you had to go to the coast and back, or you had to go to the north and south. So you had to do some practicing.

One time, we were scheduled to take this particular aircraft out on a bombing run and we were sitting in our aircraft and ready to go, just waiting for, for the instruction to taxi out and take off. And all of a sudden, a little Jeep comes to our shipment and addresses the captain, talks to him and, and he says, “Boys, we’ve got to,” the captain says to us, “we’re going to have to leave the ship here and we’re going to have to go to the, another aircraft down there because the party coming in that are assigned that aircraft, they don’t know how to use the H2S,” it’s a type of radar, “and we know how to use it. So we’re going to go, they’re going to shift us over to that one and they’re going to, that crew is going to take our aircraft.” Okay. So that meant that we had to go and do all the inspection of the new aircraft and get everything ready, make sure the bombs were in it and all this sort of thing.

And by this time, everybody’s taken off, taken off, the planes are taking off and we’re still there. All of a sudden, there’s a huge explosion at the end of the runway. Said, oh gee, something must have happened. I don’t know what happened, somebody must have dropped his load on the runway or something. We didn’t know. So anyway, we took off, we went on our bombing run and then when we came back from that, we went to the briefing room, like we, we are here face to face with somebody. And we’re telling our story, what did you see, what did you encounter and all that. And a question that came up was, “What the hell happened here at the end of the aircraft because I…” Oh, I’m ahead of my story. When we took off and went over, when we took off at the end of the runway, I’m sitting in the tail and so I’m looking right down and I see all this fire and everything at the end of the runway. And I could see the fire in the distance and all that and away we go.

So I said, or somebody said, “What happened here?” “Oh,” he said, “that’s Flying Officer Desmarais,” I think his name was or something like that, “and his crew.” He said, “They didn’t take off, they just landed, they crash landed at the end of the runway and they blew it up.” “Well,” we said, “that’s our aircraft, that’s the aircraft that we were going to take.” Oh, that was something, eh? So our own aircraft was destroyed.

Another one, where fear and panic comes in, I remember that one. We were on a, on a target to northern Germany. It was ten-tenths cloud, do you know what that is? That means it’s completely cloudy from top to bottom, from earth right to the top. Completely. You can’t see nothing, it’s black. It was a, to me, it was a failure bombing because when we got to the bombing target, we could see nothing at all except flashes of fire, reflecting into the clouds, like you’d see some red or you’d see some orange or you’d see the clouds weren’t white, they were different colours. So we never saw the, never saw the target.

But anyway, we’re turning around and we’re coming back. We’re going back. Now, when you go to a target in northern Germany, you had to fly right on the water, across the North Sea, you had to be right down on the deck. They used to call that, what, 500 feet, 600 feet, that’s the way you… And then when you came to the German coast, you rose then to go to the target. Because their radar would pick you up, if you were up at a certain height, the radar would pick you up so you had to see, had to be below that. That’s the beginning of the flight.

Now, coming back, you’d do the same thing. You’d, you’d bomb and then you’d start coming down. When you come to the coast of the North Sea, you come down to go to England. Well, I didn’t know anything about aircraft itself. I knew a little bit about the job I had to do, but I didn’t know nothing about aircraft. Well, we encountered icing, heavy icing. The pilot’s talking, he says, “We’re having a lot of icing.” I knew that, that the ice was affecting the air, at the aircraft. And I’m in the back, of course, and I hear that, and then he said, he’s telling somebody, he said, “Oh, we lost another instrument, we lost another guiding instrument,” like the level, how your aircraft is level. “We’re losing air speed indicator, how fast we’re going.” He’s talking like that. He’s driving me crazy in the back. I said, “He can’t fly this aircraft.” I said, “We’re in trouble.” I said, we’re in trouble and fear started to get in there. And understand, he knew what was going on, but he wasn’t transmitting any messages to the rest of the crew. At least, particularly with me.

Now, coming down, we struck turbulence, heavy turbulence. So the plane was going from one side to the other and I’m sitting in the back and that’s a tail there, and that tail is going this way and I’m going that way and up and down. I don’t know if the aircraft is upside down. I don’t know if it’s on its side. All I know, it’s going to break up, it’s going to destroy itself. So that’s where panic sets in. I don’t know what, I don’t know about aircraft, fear, something’s going to happen to me and panic. I said, “Something is really going to happen to me.” So I call him up. I said, “Look, if we’re going to bail out of this plane, let’s bail out over land and not over the water.” So he answered me in not a very nice way, more or less told me to shut up. I just sat back in my seat and I just prayed. And it all turned out alright.

So when I got out of the aircraft, I went to him, I said, “Why in the hell didn’t you tell me what was going on or tell us what was going on?” “Oh,” he says, “I didn’t have to tell you anything, I knew what was going on.” He wasn’t very nice that way. I mean, but from that time on, I had all the confidence in the world. Bombing was not really that accurate. In other words, they would, some bomb aimers or some captains were conscientious and they did their bombing as much as possible on the target that was assigned to them. But I’m sure that some of those bombs, fellows that went over the bombing, they got rid of them to get the hell out of there. They didn’t want to stay there any longer than was necessary. So it wasn’t miscalculations, it was just throw the bomb down on the Germans, let’s get rid of them. So, there was destruction too, the population, women and kids and old people and all that. And I didn’t like that part of it. But I think war is not very pretty anyway. And it was necessary. The army was advancing on the ground. They needed support. The air force, they were attacking us and we were attacking them, the Germans. They were bombing the English cities, coastal areas and things. Reciprocation, I guess is what the name of the game. You do it to me, I’ll do it to you. And it wasn’t pretty. It wasn’t pretty.

You feel pretty proud that you were, you were doing something, very proud that you were there. I kind of felt sorry for the people that weren’t there in a way. Why weren’t you there, you should have been there. I wasn’t happy about the people that were hiding in the woods and all this sort of thing, or disappearing or getting some kind of a reason why they shouldn’t be there. I just felt that I’ve had, I think I had to defend my country. I didn’t expect I was going to get killed. I figured I was going to make it alright and I did. I think it was a lot of, a lot of prayers from people around and all that.