"We were told that if you ever got shot down, to make sure you leave the area of your parachute."

"We were told that if you ever got shot down, to make sure you leave the area of your parachute." See below for Mr. Ryckman's entire testimony. Please be advised that Memory Project primary sources may deal with personal testimony that reflect the speaker’s recollections and interpretations of events. Individual testimony does not necessarily reflect the views of the Memory Project and Historica Canada. 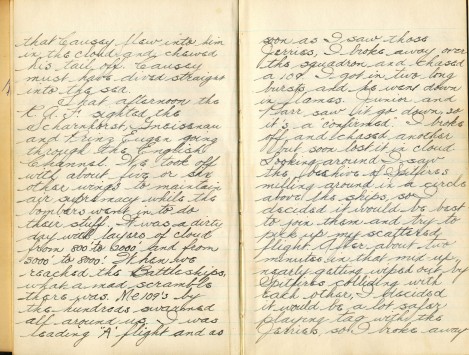 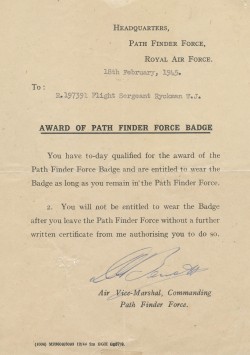 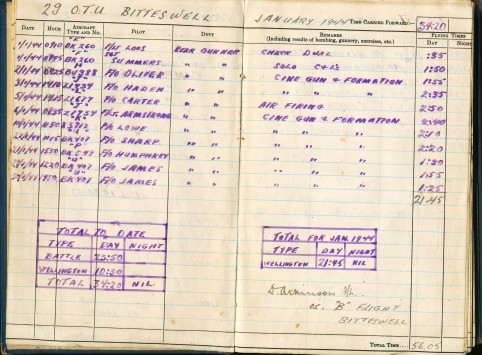 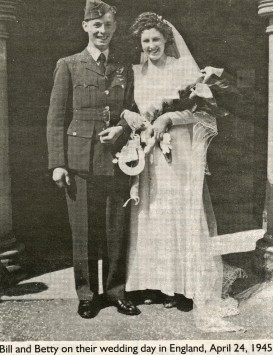 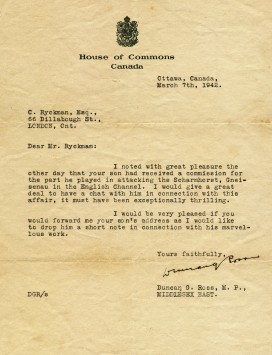 My pilot [in No. 8 Group, RAF Pathfinder Force] was from South Rhodesia [present-day Zimbabwe] and only 30 years old and he looked like a kid. And he was the boss of the airplane and nearly all the other crew were English people and they’re married men and stuff like that. And it was a kind of unusual to have a youngster piloting and looking out with being the boss of eight other people that are older than him. But he was exceptionally well trained and they only took the best they could find to do what they were doing in the pathfinders. It was quite a privilege. I had choices of flying high and get away from low gunfire or flying low and getting away from the Spitfires. So we chose to fly low and as we were flying low [sometime in early 1945], on the way back to England, after the target area was properly marked, we flew over a river which was under control of American soldiers. And they were notified that the Germans were going to parachute down and destroy the bridge on the river for the American soldiers advancing through into Germany. We were flying low and we got hit by a ground flak in the bomb bay and we hadn’t discharged our flares when the target area was already marked and was told to go home with their flares. We were hit with the flak in the bomb bay and immediately the airplane was on fire. We were still flying and the flames were coming down, back to the turret and I was getting burnt. So I told my pilot that I was going to bail out, even though I was low in altitude. So I bailed out and the flares that were in the airplane were dropped by the pilot and lit up the ground and I could see like a small clearing. This is in the dense forest in Germany [likely the Klever Reichswald]. And if I got caught in the top of the trees in my parachute, I would be there forever, so I tried to maneuver my parachute over to a clearing. And I landed in a small apple tree and was safely on the ground. We were told that if you ever got shot down, to make sure you leave the area of your parachute. So I started running towards any way and the ground was so dark and dangerous, I thought I was going to get injured, so I found a hole in the ground, I sank myself into the hole and stayed there and, over my heavy breathing, I could hear a convoy in the distance. And I didn’t know whether it was Americans advancing or whether it was the Germans retreating. So I didn’t want to rush over and get caught because the Germans at that time were not taking prisoners of war, they were just shooting us. So I waited until it got a little bit of daylight and I made my way to the convoy and it was American troops advancing, so I approached the convoy and they said they would take me back to the village behind them where most likely the rest of my crew was there. They drove me back and all my crew was there except for one navigator. And we didn’t find him, we don’t know how he got out or what happened to him but he didn’t show up and he didn’t go back to England with us. So he must have got killed. I was scheduled to marry my present wife seven days from the time I got shot down. After I got back to my squadron, I was given the seven days leave of absence and we got married and honeymooned in Lord Nuffield’s private motel in south England. And we had a week there and then I went back to my squadron and continued to fly to Germany to pick up prisoners of war and load them into our airplane and bring them back to England.