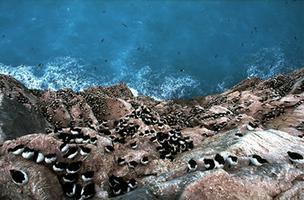 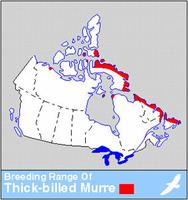 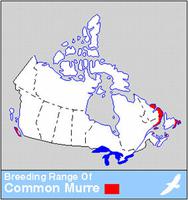 The term murre refers to 2 species, common murre (Uria aalge) and thick-billed murre (U. lomvia), the largest extant members of the auk family, though smaller than the recently extinct great auk. Murres weigh 800-1100 g and are up to 46 cm long. Plumage is dark brown to black above, mostly pure white below. Like all auks, murres come to land only to breed.

Murres often breed in dense colonies on coastal cliffs and islands, laying a single, large egg on bare rock ledges on the cliff face or surface. They normally first breed when 5 years old. Incubation, shared by both parents, takes 32-34 days. A single chick is fed at a breeding site for 15-20 days and then taken to sea by one parent (usually the male), who remains to guard and feed the chick for about 4-8 weeks.

Breeding distribution of thick-bills is also restricted; most breed at 11 sites in the eastern Arctic. The thick-billed murre population in eastern Canada totals 1.6 million pairs, representing the entire population in eastern North America and 75% of all thick-bills breeding in the western North Atlantic. Numbers of both species have been seriously reduced over the last century because of human disturbance, hunting, oil pollution and probably commercial fisheries development.

Murres are hunted by residents of Newfoundland and Labrador and by native people. Newfoundland residents were given their hunting right soon after they entered Confederation in 1949. However, until 1994, hunters could kill as many murres as they could access, with daily takes often exceeding 500 birds per hunter. Totals of about 600 000 to 900 000 were shot annually during the 1970s and 1980s, with current levels reduced to 200 000 to 400 000 birds each year. Although regulations now exist, enforcement is difficult.