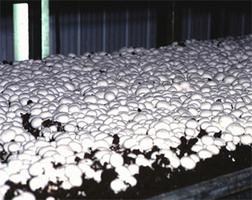 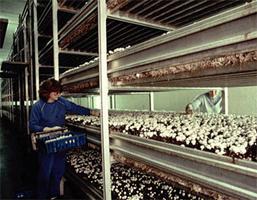 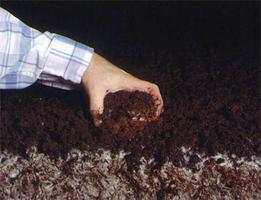 Pasteurized and conditioned compost colonized by the mushroom fungus (in white) recently covered with a layer of peat moss and lime (courtesy Danny L. Rinker). 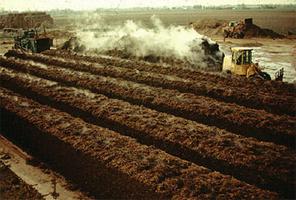 The commercial mushroom, Agaricus bisporus (Lange) Imbach, is the principal mushroom species cultivated in Canada, representing at least 95% of the production. Canada produces about 85 000 tonnes of mushrooms annually at a farm gate value ranging between $250 and 300 million. Ontario continues to cultivate over 50% of the nation's mushrooms, followed second by British Columbia at about one-third. Two varieties are cultivated, a hybrid off-white and a brown. The brown variety, depending on the degree of its maturity at harvest, is known in the market as portabella (open with gills exposed) or cremini (closed with no gills exposed). Ten to fifteen per cent of the total Canadian production is the brown variety. Other species, such as various oyster mushroom species, shiitake and enoki mushrooms, are also cultivated in Canada.

Agaricus is a saprophytic fungus and must obtain its nutrients from the materials on which it is growing. The basic ingredient is wheat straw, which is formulated with horse, chicken or turkey manures or waste grain residues to increase the total nitrogen value. Gypsum (calcium sulfate) is added to buffer the pH during composting and to improve the compost texture. Mushroom compost is prepared either in long windrows (approx 1.8-2 m wide x 2-2.4 m high) or in bulk chambers (approx 6 m wide x 7 m high, with or without doors or a roof).

The composting process includes 2 stages. The first composting stage begins with a thorough mixing and hydration of the dry ingredients. Over the next 2 weeks the raw materials are transformed through aerobic biological and chemical activities. Once the straws are soft, well hydrated, dark-chocolate brown in colour, and rich in microbes, and the compost odour is strong in ammonia, the compost is ready for the second stage of composting. In this stage the substrate is pasteurized and then held at specific temperatures that favour conversion (aka conditioning) of residual nitrogen compounds into microbial protein, later to be used by the mushroom fungus. This process usually takes between 5 and 10 days.

Once the composting process is complete, the substrate is seeded with a pure culture of the mushroom fungus. The mushroom seed, known in the industry as "spawn," is prepared in an expressly designed facility by inoculating hydrated and sterilized cereal grains (eg, wheat, rye or millet) with pure mycelia of the mushroom fungus. This spawn is thoroughly mixed into the compost. During the two-week spawn-run period the substrate temperature is maintained between 24 and 27ºC with a high relative humidity, and a carbon dioxide (generated by the fungus) level between 10 000 and 20 000 ppm.

The substrate, although it may be perfectly colonized by the mushroom fungus, will not produce mushrooms unless the surface is covered with a layer (aka casing layer) of wetted loam soil or peat moss, buffered with lime (calcium carbonate) to a slightly basic pH.

Mushrooms grow in cycles, known as breaks or flushes. The environmental conditions maintained for production are similar to those used to stimulate the mushrooms to form. Industry practice is to harvest for 2 or 3 breaks. Each break is harvested over 3 to 5 days with a non-harvesting period of about 2 days. As the white or cremini mushrooms reach market maturity they are manually picked before the gills are exposed, with growers calculating that the mushrooms will remain closed for several days under refrigeration. Portabella mushrooms are allowed to "open," exposing the gills, and are harvested with the maximum diameter but with the margin of the mushroom slightly curved toward the gill tissue. The stem is trimmed and each mushroom is gently placed into the consumer packaging. The delicate mushrooms, except for adjusting package weight, are not touched again. Promptly after harvest, the mushrooms are cooled to 2ºC using passive (refrigerator-like environment), forced air or vacuum cooling. They are maintained at refrigeration temperature until they are placed on the warmer display counter.

The used compost is pasteurized prior to its removal from the growing rooms to manage any pest problems that may have developed during mushroom production. This material can be used to grow earthworms, as a potting soil mix, to assist in cleaning up mine drainage or break down pesticides, or used as a casing material or in land reclamation. Principally, it is recycled as a soil conditioner.

Mushrooms are produced in a protected environment, thereby facilitating the elimination of pesticide usage. Thus, in accordance with other certification regulations, some mushroom farms are certified organic.