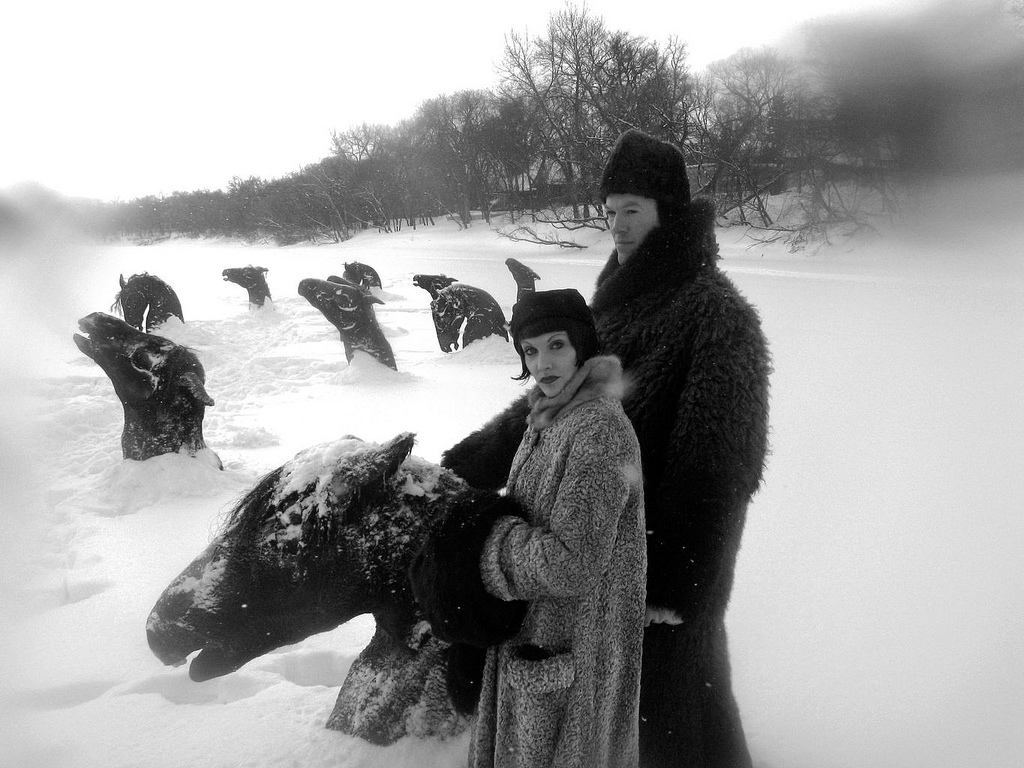 A faux documentary — or in Maddin’s words, a “docu-fantasia” — My Winnipeg began when producer Michael Burns asked Maddin to make a documentary about Winnipeg for The Documentary Channel. Maddin initially declined but later accepted the offer, and received this advice from Burns: “And don’t show me that frozen hellhole everyone knows Winnipeg is. Enchant me.”

Maddin explored the idea of enchantment and decided to portray Winnipeg through the lens of classic Hollywood mythology. “Canadians are petrified by myth,” Maddin said on the eve of the film’s premiere. “We make our historical figures smaller than life. My working definition of myth includes the real and the not real mixed together. It’s all true as long as it helps us get at what’s happened and what could happen.”

The script evolved through collaboration with George Toles, who wrote dialogue for scenes re-enacting Maddin’s childhood, while Maddin developed the narration through interviews and short recording sessions. Burns and producer Jody Shapiro insisted that Maddin narrate the film himself to counterbalance the factual inconsistencies in the film. For the dramatic re-creations, Maddin cast B-movie cult icon Ann Savage, best known for playing the femme fatale in the film noir classic Detour (1945), as his mother in what proved to be her final performance (she passed away in 2008). Maddin shot My Winnipeg in ten days with a budget of $500,000.

My Winnipeg sees Maddin dreaming of his escape from Winnipeg as a train pulls into the city. The train provides a running motif as Maddin (played by Darcy Fehr) explores Winnipeg’s past alongside his own. Maddin recalls aspects of Winnipeg’s geography and character that appeal to him, and he remembers historical milestones, some real and some fictional. These include the 1919 General Strike, the simulated Nazi invasion “If Day,” the destruction of the hockey arena in which his late father worked, and a tragedy in which racehorses ran into the Red River and remained frozen in death until the thaw.

Maddin blends these historical digressions with childhood memories. These dramatic re-enactments, featuring Savage as his mother, include a family viewing of the Canadian TV show Ledge Man, in which Maddin’s mother allegedly starred. Fact and fiction blur as Winnipeg’s history becomes inseparable from Maddin’s life and imagination.

My Winnipeg completes Maddin’s autobiographical “Me trilogy” featuring Cowards Bend the Knee (2003) and Brand Upon the Brain! (2006). My Winnipeg displays Maddin’s fascination with classic cinema at its most personal level. It conveys a life imagined through film as Maddin pictures his escape from Winnipeg while moving closer to its centre. That centre, evidently, is Maddin’s subconscious. The hallucinatory rhythm and the interchangeable use of fact and fiction create a city symphony for a Winnipeg that exists only in Maddin’s mind.

Maddin’s voyage into his memories creates narratives both objective and subjective. The film mixes facts, creative license and outright lies. The factual inconsistencies function symbolically, however, as Maddin uses historical events, such as the arena’s destruction and his father’s death, to interpret his past. Similarly, the fictitious series Ledge Man parodies Canadian television while exploring his mother’s grief following the death of her son, Cameron. My Winnipeg emphasizes illusion, especially through Savage’s ferocious performance as the mother, through the filter of classic cinema. It evokes the Hollywood dream factory, which, like Winnipeg, inspires Maddin’s work. My Winnipeg feverishly shows how mythologizing a setting inevitably fictionalizes it.

My Winnipeg premiered at TIFF in September 2007, with Maddin providing live narration onstage. Time magazine’s Richard Corliss called the movie "the finest, funniest, saddest film I've seen in Toronto or at any festival this year." The Village Voice’s J. Hoberman named it Maddin’s “best filmmaking since the not-dissimilar confessional bargain-basement phantasmagoria, Cowards Bend the Knee.” Critics agreed: My Winnipeg was Maddin’s best film to date. Virtually all the reviews were positive.

Critics also reacted to the film’s intentional inaccuracies and factual fabrications with delight. The Winnipeg Free Press’s Lawrie Cherniak said My Winnipeg “proves Winnipeg to be so eccentric that the real is as fantastic as the fantasy.” The New York Times’ A.O. Scott was tempted to thoroughly fact-check My Winnipeg, but concluded that he preferred ignorance of its (in)accuracies, saying, “even though I suspect that some of its more outlandish assertions are at least partly grounded in fact, Mr. Maddin is engaged less in historical inquiry than in hallucinatory autobiography, ruminating on the deep and accidental relationship between a specific place and an individual life.” In his book on My Winnipeg, Darren Wershler summarized the film’s appeal by observing that, “My Winnipeg is intriguing because it is psychologically and affectively true without being historically accurate.”

My Winnipeg brought Maddin significant recognition. It won the award for Best Canadian Feature Film at TIFF and earned nominations from the Directors Guild of Canada, the Genie Awards and the Online Film Critics Society. My Winnipeg made several top ten lists, including those published by Time and the Globe and Mail, as well as TIFF’s annual Canada’s Top Ten list. Roger Ebert cited it among the best films of the decade in 2009.

In 2015, My Winnipeg became the thirteenth Canadian film released by the prestigious Criterion Collection; it was also ranked among the Top 10 Canadian films of all time in a poll conducted by TIFF. In 2016, My Winnipeg was named one of 150 essential works in Canadian cinema history by a poll of 200 media professionals conducted by TIFF, Library and Archives Canada, the Cinémathèque québécoise and The Cinematheque in Vancouver in anticipation of the Canada 150 celebrations in 2017.