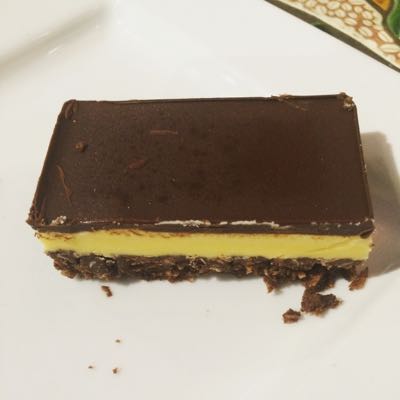 Much like the butter tart and date square, the Nanaimo bar fits Canada’s apparent predilection for rich, decadent sweets. It is a dessert bar that requires no baking and generally consists of three layers: a graham wafer crumb and shredded coconut base, custard-flavoured butter icing in the middle, and a layer of chocolate ganache on top. There can be some variations with each of these layers — e.g., adding mint, mocha or other flavouring, as well as food colouring, to the icing centre, or various nuts to the base — but a classic Nanaimo follows the traditional trifecta.

There is a long tradition of no-bake desserts, dating back to the beginning of the Common Era when Marcus Gavius Apicius described making a jelly with bread crumbs soaked in wine and cheese, and chilled in snow. More recent is the English trifle, made of stale sponge cake brushed with liquor, layers of custard and jam, with cream on top, which dates back to at least the late 16th century.

Quick refrigerator dessert squares exploded in popularity following the Second World War when butter and sugar became widely available after years of rationing. Sweet tooths ruled the day with a plethora of recipes calling for marshmallows, sweetened condensed milk and crumbled cookies. No-bake desserts such as the Nanaimo bar also grew in prominence due to the cultural mores of postwar North America. In her book Baking as Biography, Diane Tye notes that expensive and time-consuming dainties were considered a status symbol. Although the Nanaimo bar requires several expensive pre-made goods, its appeal had more to do with conspicuous consumption than with saving time. In addition to being a status symbol, the time needed to prepare Nanaimo bars for entertaining guests reflected the leisure time ostensibly afforded to women outside the workplace.


Creation of the Nanaimo Bar

Several different recipes for unbaked chocolate cake were published in the Vancouver Sun in the late 1940s, including two recipes for the coconut and graham cracker base, which appeared in 1947 and 1948. However, the first version of the Nanaimo bar as we know it today appeared in the Women’s Auxiliary to the Nanaimo Hospital Cookbook, published in 1952. It contained three similar recipes referred to as either “chocolate square” or “chocolate slice.” The recipe that is most similar to the current version was submitted by a Mrs. E. MacDougall. The earliest recorded instance of the name “Nanaimo bar” was in a 1953 Edith Adams article in the Vancouver Sun, which also referred to the square as a “London Fog Bar.”  (Similar to Betty Crocker, Edith Adams was an identity created by the Vancouver Sun for articles on cooking and homemaking.)

However, some oral histories place the creation of the bar in earlier time periods and different locations. Aimee Greenaway, interpretation curator at the Nanaimo Museum, has said that there were stories of families “sending Nanaimo bars on sailing ships from England to Nanaimo… but we haven’t been able to find anything to back that up.’” In the 1980s, a member of the Women’s Auxiliary to the Nanaimo Hospital claimed that their recipe came from one for “Chocolate Fridge Cake” published in the Vancouver Sun in 1936, but such a recipe cannot be found in the Sun’s archives. Meanwhile, Jean Paré, author of the Company’s Coming series of cookbooks, claims that the bars originated in Alberta and were called “Smog Bars.” Paré, who was born in 1927, claims to remember her mother and grandmother making them in Alberta prior to 1947. “Everybody made them: graham-cracker crust, cocoa, Bird's Eye custard in the filling,” she has said. However, scholar Lenore Lauri Newman conducted an exhaustive search of Albertan cookbooks from the 1920s and 1930s and found no such recipe.

Susan Mendelson is perhaps most responsible for commercializing the Nanaimo bar. She sold the bar during the 1970s to help pay her tuition, and in 1979 founded The Lazy Gourmet, a cafe and catering company in Vancouver, which claims to be the first business to sell the dessert. Mendelson wrote the official cookbook for Expo 86, held in Vancouver, and included the Nanaimo bar. In conjunction with Expo 86, Nanaimo introduced the town’s mascot, a walking Nanaimo bar named Nanaimo Barney, and Mayor Graeme Roberts held a contest to determine the definitive Nanaimo bar recipe.  The winner was submitted by Nanaimoite Joyce Hardcastle.

After that, the Nanaimo bar began to be sold on BC Ferries and spread in popularity across Canada. It can now be found in Costco, Starbucks and countless cafes in Canada and the United States. A variation known as “prayer bars” is also popular in the American Midwest.

In a bid to take advantage of the bar’s popularity, the city of Nanaimo launched a tasting trail much like Ontario has done for the butter tart. Different locations in and around Nanaimo serve different variations on the classic dessert, from flavours such as maple bacon and peanut butter to deep-fried Nanaimo bars, Nanaimo bar spring rolls, Nanaimo bar waffles and cheesecake and Nanaimo bar coffee and cocktails. 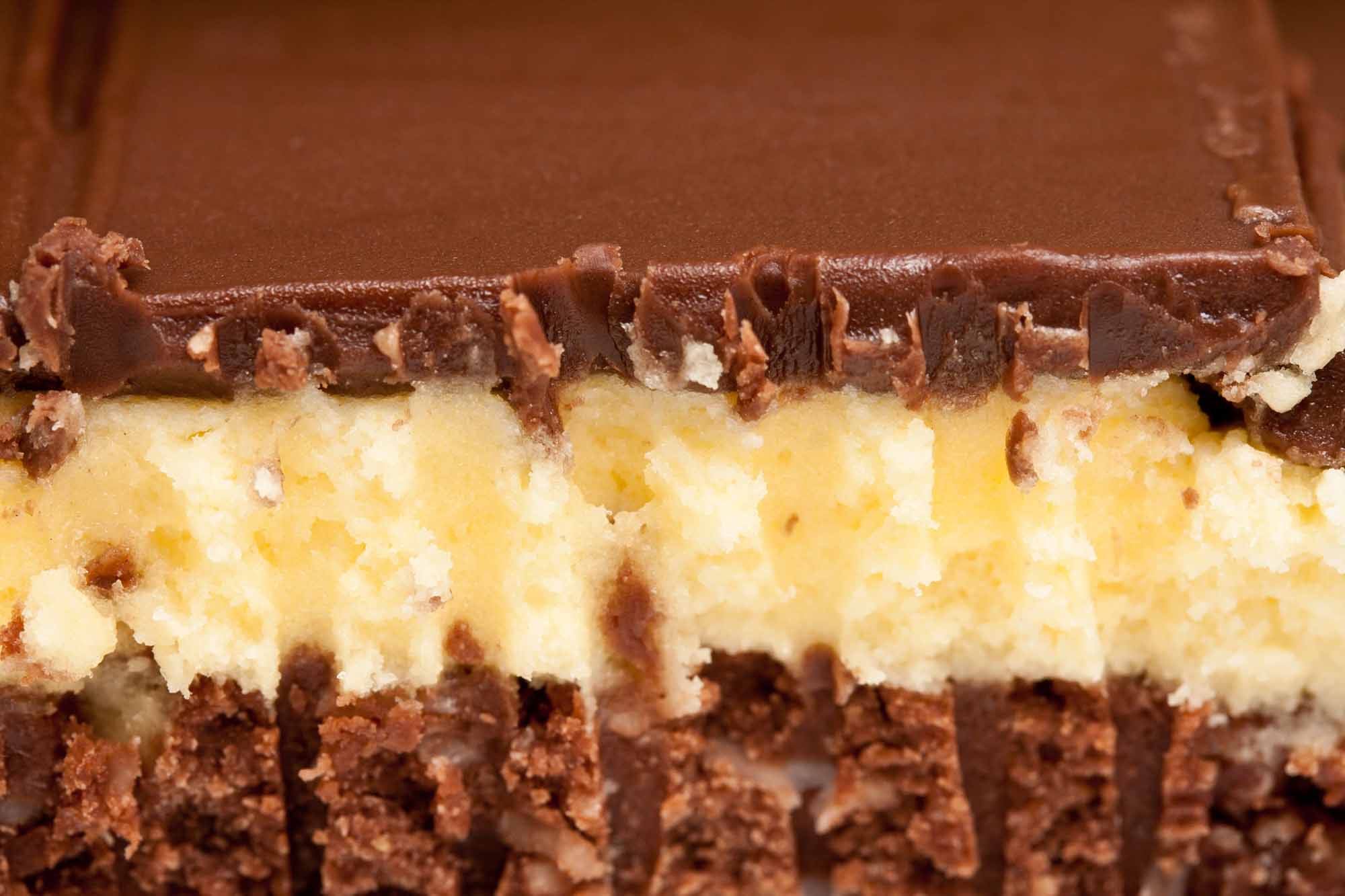 For the third layer, melt 4 squares of semi-sweet chocolate (1 oz. each) and 2 tablespoons unsalted butter over low heat. Cool. Once cool, but still liquid, pour and smooth over second layer and chill in refrigerator.  Cut into small squares to serve.