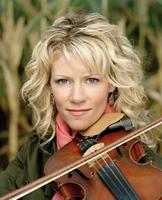 Natalie MacMaster's mother taught her to step dance at age five. When she was nine years old her great-uncle gave her a miniature violin, and she began to learn traditional fiddle tunes by ear. She made her debut playing at Cape Breton square dances, and for three years travelled to mainland Antigonish to study violin with Stan Chapman. As a child, she jammed with Cape Breton fiddlers Buddy MacMaster (her uncle) and Ashley MacIsaac (a distant cousin). At 12 she toured the North American Celtic festival circuit. Two years later she performed at Expo 86 in Vancouver.

MacMaster's traditional Cape Breton fiddling style is based on a rich Highland Scotland repertoire of 17th-, 18th-, and 19th-century airs, strathspeys, marches, jigs, reels, and hornpipes. "It's not a very common fiddle style," says MacMaster. "The only place you can find it is on Cape Breton Island. In Scotland, they have lost that style.... The Cape Breton style still has some rawness." She occasionally layers the traditional music with her original contemporary stylings. She explains, "Some people will argue that this ruins the tradition, but it doesn't really. It's keeping the tradition alive, and who can really argue with that?"

In 1996 MacMaster signed a recording contract with Warner Music Canada and released her debut album, No Boundaries. During the same year she guest-hosted CBC Radio's Atlantic Airwaves and began to teach at fiddler Mark O'Connor's annual Nashville music camp. Her teaching methodology was captured in the 1997 video Fiddle Lesson with Natalie MacMaster (NMAS V 1997 MacMaster Music). In both 1997 and 1998 MacMaster was named fiddler of the year at the Canadian Country Music Awards.

Her traditional album, My Roots Are Showing (1998, CDTRAX 163 Greentrax), won best instrumental album at the 1999 Juno Awards, and in 2000 was nominated for a Grammy Award in the best traditional folk music category.

Attempting to break through to US audiences, in 1999 Rounder Records released In My Hands (2 28398 WEA). She provided her first vocals on the title track. In 2000 In My Hands won the Juno Award for best instrumental album.

In 2003 MacMaster released Blueprint (82876-56971-2 ViK). Co-produced in Nashville by Darol Anger and MacMaster, the album fused traditional Cape Breton fiddling with bluegrass. She launched an extensive North American tour, playing with various musicians and orchestras, including the Boston Pops. She became a member of the Order of Canada in 2006.