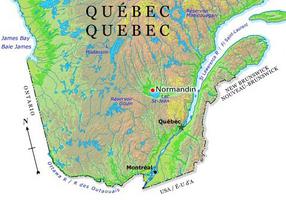 Normandin, Québec, Town, pop 3220 (2006c), 3524 (2001c), inc 1979. Normandin is located north of the Parc des Laurentides in the Saguenay-Lac-Saint-Jean region. Lac-St-Jean is found 25 km to the southeast and is a popular destination for water sports recreation.

On 14 February 1979, the city of Normandin was created by the amalgamation of the village of Normandin and the parish of Normandin. However, its history began on 23 May 1733 when Joseph-Laurent Normandin was sent to survey this region and prepare a map of the lakes and rivers. Starting from Lac-St-Jean, he was the first person to survey the 300 km to the northwest. The current boundaries of the Saguenay territory have been established in accordance with his report. The first colonists arrived in this "promised land" in the summer of 1878.

The city's economy is based on agriculture and forestry. In 1936, le Ferme expérimental was established to study the climatic conditions and distinct soils of the Lac St-Jean region. As of 1988, research began on cereals, indigenous plants, and horticulture.

Colonizing a new region meant clearing the land. Sawmills were a necessity and began appearing quickly. Their effect on the economy is still evident, with the Cie Donohue being the largest employer. However, to maintain this renewable resource the Pépinière Forestière Provinciale was established in 1927 with reforestation of the region as its mandate. This nursery produces 15 million plants annually.

Normandin began development of the Grands Jardins in 1994 and these gardens were officially opened in the mid-1990s.

As the population flourished in Normandin so did the Church. The chapelle de Saint-Cyrille de Normandin was built in 1883. Then followed a new, larger church in 1897. Disaster struck when in 1974, l'Église de Pierre, constructed of red granite in 1917, burned down. Nevertheless, the people of Normandin pressed on and completed a new church in 1977.

Normandin is the educational centre for 5 parishes, but its schools began in rented homes so cold that on Monday mornings the children would recite their lessons around the stove. Due to the growth of the student population and the closure of the parish schools, children began attending le Collège de St-Joseph and the Couvent Ste-Marie run by the Catholic diocesan. In 1969, the Collège was destroyed by fire. Many children once again attended classes in public buildings and homes. This adversity brought about the redevelopment of l'école Ste-Marie and the construction of l'école polyvalente.

Recreation
Constructed in 1972, the Centre sportif can accomodate 1500 people. In addition to hosting the provincial competition in archery, this city hosts the Junior AA hockey team of Saguenay- Lac-St-Jean, Les Éperviers de Normandin.

Developed along the rivière Ashuapmouchouan, la Chute à l'Ours (1966) is a natural setting of great beauty. It is at the base of the rapids where the ancestors of the Normandin first disembarked.