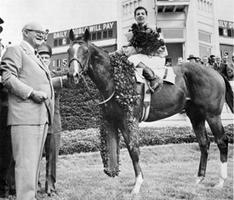 Northern Dancer, racehorse (b at Oshawa, Ont 27 May 1961; d at Chesapeake City, Md 16 Nov 1990). Bred at E.P. Taylor's National Stud Farm, Northern Dancer was unsold as a yearling, but as a 2-year-old won the Remsen Stakes, NY, the Flamingo and Florida derbies, and the Summer Stakes, Coronation Futurity and Carleton Stakes in Canada.

Retired to stud, Northern Dancer became the greatest stud horse in history. By the time of his death, 467 of his 635 registered foals had won races and over 150 had won stakes races. Many of today's best thoroughbreds trace their lineage to him. Some of his more important offspring include Epsom Derby winners Nijinsky and The Minstrel.
×