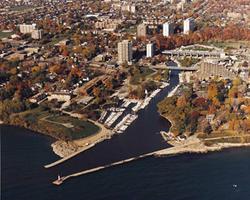 Oakville, Ont. Town founded in 1825 on Sixteen Mile Creek at Lake Ontario, between Toronto and Hamilton. A regimental brass band was formed in 1866 by the 20th Halton Battalion Infantry but was supplanted in 1881 by the infantry's Lorne Rifles Pipe Band. The brass players then formed the Oakville Citizens' Band (brass), later called the Oakville Concert Band, which performed thereafter at important town functions and continued to do so in 1990. In 1857 music instruction was offered at the Oakville Ladies' Academy, and around that time a pipe organ, built by Oakville resident Richard Coates, was installed at St Jude's Anglican Church and carried on in use when a new building was erected in 1883. A choir was organized ca 1868 at the Canada Presbyterian Church. In the 19th century balls and stage entertainments were held at Temperance Hall, Town Hall, and Commins' Music Hall (1894-8). Musical activities of an occasional kind continued in the 20th century but - perhaps because Toronto was so near - organizations giving regular concerts did not flourish until later. The Oakville Symphony Orchestra was founded in 1967 under the direction of Kenneth Hollier, succeeded by David Gray, 1974-6, Anthony Royse, 1976-83, Sydney Read 1983-6 and David Miller in 1987, and the Oakville Chamber Ensemble was founded in 1985 by John and Sharon Knauer. Other organizations which have been active in Oakville include the Kelso Music Centre (1971-7), the Tempus Youth Choir formed in 1972, and the Sheridan Music Festival begun in 1974. Continuing to perform in 1991 are the Whiteoaks Choral Society formed in 1968 under Gifford Mtchell, the Halton Youth Symphony, the Trillium Chorus (Sweet Adelines) and the Oakville Entertainers, and two Croatian Folklore Ensembles - Prelo, and Blue Adriatic. Oakville has branches of the COC Guild, the RCMT, and an active Suzuki Association. The 500-seat theatre in the Oakville Centre for the Performing Arts, opened in 1977, became the venue for both community and touring musical performances. In 1924 the headquarters of The Frederick Harris Co (later the Frederick Harris Music Company) moved to Oakville from Toronto, and in 1970 Leslie Music Supply Inc was established in Oakville. John Freeman Davis was born in Oakville, and Hagood Hardy was raised there.