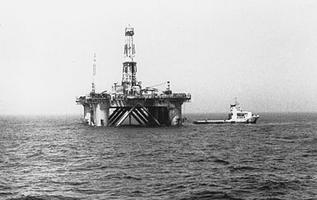 On 15 February 1982, the world's largest semisubmersible drill rig, Ocean Ranger, capsized and sank in a fierce storm on the Grand Banks with the loss of all 84 crew members.

On 15 February 1982, the world's largest semisubmersible drill rig, Ocean Ranger, capsized and sank in a fierce storm on the Grand Banks with the loss of all 84 crew members, 56 of whom were Newfoundlanders. Owned by the New Orleans-based Ocean Drilling and Exploration Co (ODECO) and under contract to Mobil Oil Canada, Ltd, the rig was working in the Hibernia oil field, about 315 km east of St John's. The Ocean Ranger and 2 smaller rigs drilling in the area at the time were hit by winds of 145 km per hour and 18 m waves. The other 2 rigs, the Sedco 706 and the Zapata Ugland, survived the storm.

Three inquiries, the joint Federal-Provincial Royal Commission on the Ocean Ranger Marine Disaster and 2 US studies, found that the rig sank after seawater entered its ballast control room through a broken porthole and caused an electrical malfunction in the ballast panel controlling the rig's stability. The commission concluded that the capsizing and loss of life was caused by a "chain of events which resulted from a coincidence of severe storm conditions, design inadequacy and lack of knowledgeable human intervention." Following these inquiries and based mainly on the recommendations of the royal commission, sweeping regulatory changes were made in training and safety practices and procedures offshore.