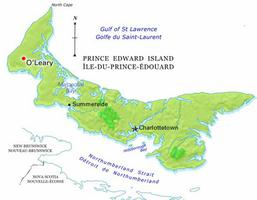 O'Leary, PEI, incorporated as a village in 1951 and as a community in 1983, population 812 (2011c), 861 (2006c).The Community of O'Leary is situated in Prince County 59 km northwest of SUMMERSIDE. It came into being after 1874, when the railway was constructed. Because of transportation problems, few colonists had lived inland. But needing to limit costs, the tracks were built through the Island's heartland rather than circumscribing it. To service the West Cape settlers, the O'Leary rail station was constructed 20 km from the coast. As the local focus of trade, merchants soon gathered around the station. A road and subsequently the station were named after an early settler, and the fledgling community adopted the name. Today, O'Leary remains a viable small commercial centre. The last train ran in 1989; the community is the eastern terminus of Confederation Trail that uses the abandoned rail line. O'Leary is also home of the PEI Potato Museum.