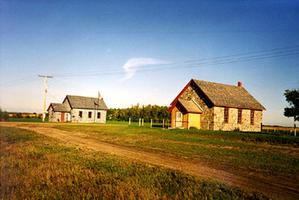 Immigrants from the Orkney Islands, off the north coast of Scotland, Orkneymen played a major and largely unrecognized part in the exploration and settlement of Canada's North-West in the 18th and 19th centuries. The majority came as labourers and boatmen for the HUDSON'S BAY CO until 1870, although the practice of hiring Orkneymen for their northern stores continued until the mid-20th century. Inhabitants of the Orkney Islands, sometimes known as Orcadians, have been characterized as farmers who fish: they dwell on some of the most fertile land in the British Islands and they are surrounded by the sea. In the 1700s, the Orkney Islands emerged from centuries of isolation as a source of manpower for fishing and whaling fleets in peacetime and the Royal Navy in times of war. The HBC, always able to recognize a bargain, was soon attracted to the same recruiting ground where good men could be had for less than half the wages expected by Londoners.

The first Orkneymen were brought out in the first decade of the 18th century, but the practice did not become regular until the 1730s. At the peak of their involvement with the HBC in 1800, Orkneymen comprised 80% of a labour force of almost 500. The majority of the company's men at the bay were Scots from these northern isles until 1810 when steps were taken to diversify recruitment, although Orkneymen continued to be favoured for some positions, including those of boatmen and fishermen.

Although most of the Orkneymen returned home after a few years of service in relatively menial positions, a few chose to stay on. Some rose to positions of prominence, including Joseph Isbister, governor at York Factory in the 1740s; William Tomison, a later governor at the same place and founder of Edmonton; and Sir John RAE, the Arctic explorer who discovered the fate of the Franklin Expedition. After 1810 many decided to take up land in the Red River settlement where they were joined by the country-born offspring of their unions with native women. The Orkneymen and these offspring played a pivotal role in the early history of Manitoba and the Canadian West. In their number can be found prominent historic figures such as the Hon John NORQUAY, premier of Manitoba. Descendants of the Orcadian employees of the Hudson's Bay Co can now be found in every province and territory, but the majority still live in the West and the North in the land that their ancestors first came to more than 250 years ago.