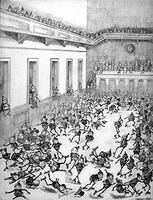 Palmer Cox, caricaturist (b at Granby, Qué, 28 Apr 1840; d there 24 July 1924). At the age of 17 Cox left Granby to work in Massachusetts (1957-59), Ontario (1860-63), California (1873-76) and New York City (1876-1904). He had published his first caricatures in California, but it was the appearance of the Brownies, elfin characters derived from Scottish lore, in the noted American children's magazine St. Nicholas in February 1883, that launched Cox's career. He would publish 15 books of the Brownies' adventures from 1885 to 1918 as well as numerous stories in St. Nicholas (1893-1914) and Ladies' Home Journal (1891-1910). The Brownies appeared in their own theatre company and on toys, games, porcelain, cutlery and numerous advertisements, the most notable product being the Brownie camera launched by Eastman Kodak in 1900. Cox retired to Granby in 1904, where he had constructed his Brownie castle.