While the two sides in the rail strike remained at loggerheads last week, the government moved quickly to end the dispute.

This article was originally published in Maclean's Magazine on April 3, 1995

While the two sides in the rail strike remained at loggerheads last week, the government moved quickly to end the dispute.This article was originally published in Maclean's Magazine on April 3, 1995 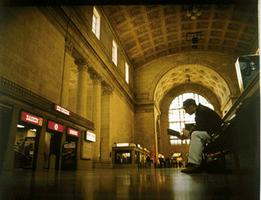 Union Station passengers had to find other means of transportation, April 1995 (courtesy Maclean's).

Canada's railways have a long and celebrated history - so much so, in fact, that the construction of a transcontinental railway in the 1880s has been elevated to the status of a national dream. But for the executives who currently run CP Rail, CN Rail and Via Rail, that dream has become a costly nightmare. Because so many of the conditions built into railway labor contracts are mired in the past, company managers contend that their ability to compete has been critically compromised. They point out, for example, that they are required to maintain separate crews for the repair of wooden and concrete bridges. Under the same rules, three skilled tradesmen are required to change a windshield wiper on a locomotive. And those contractual terms, along with an employment security clause that gives rail workers a full salary until retirement age if they lose their jobs under certain circumstances, are at the heart of a union-management dispute that shut down most of the country's rail system beginning on March 18. "We need to operate more efficiently," said CP Rail president Robert Ritchie. "We need to reduce the number of employees we have."

While the two sides in the rail strike remained at loggerheads last week, the government moved quickly to end the dispute. But as the cost of the strike mounted and as thousands of railway commuters in Montreal and Toronto spent the week using alternate means of transportation, the Opposition Bloc Québécois, backed by New Democrat MPs, used procedural rules to delay the passage of back-to-work legislation. That prompted the government to schedule a rare weekend sitting of Parliament - only the fourth in the past 25 years - to pass the legislation. MPs were poised to give the legislation final reading on Sunday, with the Senate to follow by Sunday night. As a result, the strikers were expected to be back on the job as early as Monday, with trains to start running again by midweek. Liberal and Reform mps combined against Bloc members to limit debate and speed the bill through. "They don't give a damn about Canada," Transport Minister Douglas Young said about the Bloc mps. "They hate Canada."

Debate also was spirited about the cost of the strike to the Canadian economy. Some economists estimated that the weekly bill would hit $3 billion, while others argued that the costs would be minimal. Said Robert Fairholm, an economic forecaster with the consulting company DRI Canada: "Two months from now, it will look like it never occurred." Most agreed, however, that a strike that lasted more than seven to 10 days would do serious damage to the economy, particularly if it began to disrupt exports of manufactured goods, which have led the current economic recovery.

But whatever the ultimate cost of the service disruption, its impact was felt immediately from coast to coast. Activity at ports in Vancouver and Halifax slowed sharply. Shipments of grain from Prairie elevators virtually stopped. Auto plants in Central Canada were left scrambling for supplies. And in a few cases, workers were sent home because their employers could not continue operating without regular rail deliveries. The most prominent case was Ford Motor Co. of Canada Ltd., which closed its assembly plant in St. Thomas, Ont., for several days, and switched to half-day shifts at two other Ontario assembly plants.

The shutdown also touched off a messy spat among union leaders. Basil (Buzz) Hargrove, president of the Canadian Auto Workers (CAW), which represents about 20,000 workers at CN, CP Rail and Via, contends that the unions had agreed among themselves that they would restrict any work stoppages to CP Rail - and that no action would be taken until March 15. He added that the agreement began to unravel on March 8 when the Brotherhood of Maintenance of Way Employees (BMWE), whose members are responsible for maintaining the tracks, began a series of one-day rotating strikes against CP Rail. The company responded by locking out the BMWE. Then, on March 18, the BMWE announced a strike against CN; that afternoon two other unions walked out. The dispute quickly crippled the entire rail system.

Union politics aside, for most of the 35,000 unionized employees at the three companies, the negotiations have been both frustrating and fruitless. Although several small unions have settled with CP Rail, a large majority of the railway workers have been without contracts since their previous two-year agreements expired on Dec. 31, 1993. Although negotiations have dragged on since the fall of 1993, many union leaders complain that the companies have refused to bargain and were simply trying to impose a settlement.

The Liberals' back-to-work legislation provides for three-member commissions to oversee negotiations between each company and its unions. The commissions will comprise a government-named chairman as well as representatives selected by the companies and the unions. Initially, they will act as mediators, but they have the power to impose settlements if the participants cannot reach agreements within 70 days. "Going to arbitration is an automatic loss for us," says Hargrove. "These issues are too complex to have someone from outside make the decision for us."

The principal issue dividing labor and management is employment security, which the railways granted to their workers in 1985. In exchange, the workers reduced their demands for salary increases and changes in workplace rules. The provision protects employees with at least eight years' service whose positions are abolished because of technological, operational or organizational changes introduced by the company. Under those circumstances, they are entitled to full wages and benefits until they are eligible to collect their pensions, although they must be willing to accept other work with the company within specified geographical areas. Union leaders insist that the companies are exaggerating the cost of employment security, and they point out that the railways have collectively reduced their workforces by about 30,000 employees - mostly through attrition, early retirements and buyouts - since employment security was first negotiated.

The unions say that very few of their members are actually sitting around collecting employment security benefits. Bill Roberts, a 30-year-old CN worker from Belleville, Ont., was protected by the clause when his position disappeared last July. A member of the BMWE, he joined the company 12 years ago and had worked as a repairman in the Rideau district, which stretches from Cornwall to Oshawa. But after his position disappeared, the company offered him another job in Toronto; if he had refused, he might have lost his benefits. Roberts, who has two children aged 4 and 8, now works at a CN yard in Toronto five days a week, staying with family members, and returns home on weekends. "If I lose my employment security, I don't have a job, period," says Roberts. "I'd be sitting at home hoping to God I could get a seasonal job with the railway."

On the other hand, senior railway executives insist that they need significant modifications to the contentious clause as part of an ongoing effort to reduce their operating costs. Terry Lineker, CN Rail's assistant vice-president of labor relations, says that 600 employees will collect a total of about $25 million in employment security benefits this year. For his part, CP Rail's Ritchie notes that the company is providing such benefits to about 300 workers in Montreal alone - some of whom have exercised their right to refuse jobs with CP in Alberta. "We have to hire and train mechanics in Calgary while people sit at home doing nothing in Montreal," says Ritchie. "This clause never should have been put in place."

According to Ritchie, it was Ottawa's ownership of CN that originally led to the clause's introduction. The Crown corporation, he said, was the first employer in the industry to settle with its workers in 1985, and created a precedent by giving in to the unions' demands for employment security. Ritchie said that CP Rail had little choice but to grant its unions the same protection. If it had refused, he added, the company would have faced a national strike, followed by back-to-work legislation and, possibly, an arbitrated settlement that included employment security.

The other critical issue on the agenda - at least for railway managers - is workplace flexibility. Senior executives argue that many of the rules dictating which trades can perform which jobs date back to the days of steam locomotives. As a result, simple tasks that could be performed by one journeyman mechanic frequently require several skilled tradesmen. Lineker notes that in CN repair shops the thickness of a piece of metal determines which trade handles it: a sheet-metal worker is required if the metal is as thick as a dime, a carman takes over if it is equivalent to a quarter and a boilermaker steps in if the metal is as thick as a loonie. "We want to get rid of these antiquated rules," declared Ritchie.

While CP's rail operations have generated strong profits in eight of the past 10 years, CN's record has been much less consistent. Nevertheless, both companies are trying to reduce their costs because they face much stronger competition from deregulated American railways and trucking companies. In addition, in his February budget Finance Minister Paul Martin announced that Ottawa intends to privatize CN. "Canadian National quite clearly needs to decrease costs very substantially before it can become a candidate for privatization," says John Heads, director of the University of Manitoba's Transport Institute.

Heads adds that if Canadian railways fail to bring their costs into line with competing U.S. companies, they will suffer a decline in freight volume: imported cars and consumer goods from Asia, for example, could be transported from the West Coast to Central and Eastern Canada on U.S. lines. As it stands, he says, rail workers in Canada are substantially less productive than their American counterparts, partly because they serve fewer customers spread over a wider area. And, Heads notes, Canadian railways pay higher taxes than their U.S. competitors, amounting to a difference of about $5 for every $100 of expense incurred. Those factors help to explain why operating expenses for Canadian railways total about 90 per cent of revenues, compared with about 80 per cent for the most profitable U.S. lines. Says Heads: "The railways' complaint that they're poor compared with the U.S. railways is absolutely true." No matter what type of settlement emerges from arbitration, running a railway in Canada is likely to seem anything but a national dream - for the foreseeable future at least.