The elder son of an army colonel, Paul Gross appeared in his first TV commercial at the age of 14. Leaving his studies in drama at the University of Alberta at the end of his third year in 1980 (but completing his degree later), he embarked on a stage career that included roles at THEATRE CALGARY, Toronto Free Theatre and the NATIONAL ARTS CENTRE. His performance as Romeo in the 1985 production of Romeo and Juliet in Toronto's High Park earned him a DORA AWARD nomination, and in 1988 he won the Dora for his role as the young Kenneth Pyper in Observe the Sons of Ulster Marching Towards the Somme. His TV and film appearances have included 20,000 Leagues Under the Sea and the mini-series Chasing Rainbows and Tales of the City; the movies Cold Comfort, Buried on Sunday and Whale Music; and the 1993 Hollywood feature Aspen Extreme.

In 1982 Paul Gross won the Alberta Cultural Playwriting Award and the Clifford E. Lee National Playwriting Award for his first stage script, The Deer and the Antelope Play. It was followed by The Dead of Winter, a 1982 CHALMERS Award nominee. A third play, Sprung Rhythm, premiered at the National Arts Centre in 1984 and was presented in Toronto 2 years later in a revised version titled Buchanan. Neither it nor a fourth stage work, the multi-media rock musical Thunder, Perfect Mind, met with unqualified success, and after 1985 Gross turned his attention to television, where his writing credits include the CBC dramas Gross Misconduct and In This Corner. The latter screenplay earned him a 1986 GEMINI AWARD nomination. 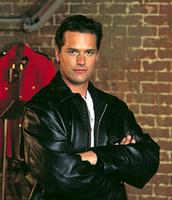 When his starring vehicle due South, a comedy-drama series about a Mountie in Chicago, was cancelled by CBS in the United States after its second season, Paul Gross helped resurrect it as executive producer and head writer, in the process winning a 1998 Gemini Award for best writing in a dramatic series. As the head of his own production company, Whizbang Films, he subsequently produced and starred in the 1999 TV movie Murder Most Likely. In 1997 he released the country-music CD Two Houses, co-written with fellow actor and musician David Keeley, and in 2000 he returned to the stage to play Hamlet at the STRATFORD FESTIVAL of Canada.

Paul Gross made his feature-film directing debut in 2001 with Men with Brooms, which he co-wrote and starred in. From 2003 to 2006 he played the lead role in the mini-series Slings and Arrows, a story inspired in part by his and the writers' experiences at the Stratford Festival. He was awarded the Gemini for best actor for this role, in 2004 and 2007. In 2004 Paul Gross co-wrote and co-produced the CBC mini-series H2O, in which he starred as the prime minister of Canada. It was followed in 2008 by a 2-part sequel, The Trojan Horse.

Paul Gross returned to the big screen with Passchendaele (2008), an epic First World War romance that he wrote, directed and starred in, as well as co-produced. A major directorial advance over Men with Brooms, it was the opening film at the Toronto International Film Festival, and a critical success. The core of the film is based on his grandfather's horrifying experiences in the killing fields that were the 3 Battles of Ypres. During a prolonged attack on the small French village of Passchendaele in November of 1917, there were 16 000 Canadian casualties including 5000 dead. Gross shot his $20-million film, the most expensive ever financed solely in Canada, with 200 extras on the Tsuu T'ina First Nations reserve near Calgary. Passchendaele won the 2009 GENIE AWARD for best picture as well as the 2009 GOLDEN REEL AWARD, given to the Canadian film with the highest box-office receipts. A large part of what Gross wanted to do with the film was to increase interest in Canadian history. To this end, the producers added a web-based educational component in the form of a study guide that was distributed to schools across the country.

Gross played the devilish Darryl Van Horne in the TV series Eastwick (2009-10), and starred as the Montana Kid in a spoof of the old-fashioned Hollywood westerns, Gunless, which was released in Canadian theatres in 2010. He appears in the TV series Men With Brooms (2010), has a cameo in the Oscar-nominated film BARNEY'S VERSION (2010) and guest-starred as a murderous former police officer in the Newfoundland-filmed Republic of Doyle (2011). A co-starring role in Noel Coward's comedy Private Lives saw him onstage with Kim CATTRALL at the Royal Alexandra Theatre in Toronto and on Broadway in New York in 2011. That year he was executive producer for the six-part mini-series The Yard, began location-shooting for the feature film Hyena Road, set in Afghanistan, and was writer, producer and star on the political drama series Jerusalem.