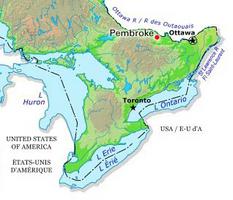 Pembroke, Ont, incorporated as a city in 1971, population 14 360 (2011c), 13 930 (2006c). The City of Pembroke is located on the Ottawa River at the confluence of the Indian and Muskrat rivers, 150 km northwest of Ottawa. Peter White, a retired naval petty officer who had served under British Admiral Horatio Nelson and on Lake Ontario in the War of 1812, settled here in 1828. The early communities, known as Campbellton and Miramichi, became Pembroke in honour of Admiralty Secretary Sidney Herbert, son of the earl of Pembroke.

Long associated with the lumber trade, the city currently produces wood and paper products in addition to other light manufacturing. The seat of Renfrew County, it is also the commercial and service centre of the region. Pembroke was the site of pioneering experiments in telephones (1878) and commercial lighting (1884). Canadian Forces Base Petawawa is located nearby.

Pembroke has a bridge link over the Ottawa River to Québec and its marina is part of the Lake Temiskaming-Ottawa River Waterway. The history of Pembroke and of Renfrew County is depicted in murals on downtown business walls as well as in the Champlain Trail Museum. The city has a campus of Algonquin College.