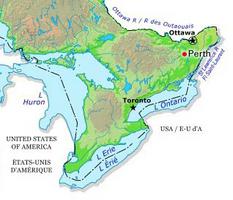 Perth, Ont, incorporated as a town in 1854, population 5840 (2011c), 5907 (2006c). The Town of Perth is located on the Tay River, 80 km southwest of Ottawa. It was laid out in 1816 as a backwoods military settlement intended to provide experienced militiamen for the defence of the inland water route linking the Ottawa River and Lake Ontario. Perth was joined to the RIDEAU CANAL by a separate canal in 1834, putting the settlement in touch with the flow of commerce through this "backdoor" to Upper Canada. Among the earliest settlers were several hundred immigrants from Perth, Scotland, from which the village received its name.

Cheese making has always been an important local industry. In 1893 a local cheese weighing 9979 kg and measuring 1.8 m high and 8.56 m around was sent to the Chicago world's fair. The seat of Lanark County, Perth has an economy based on light industry and in the summer hosts many vacationers who are attracted to the surrounding lake country. Many beautifully preserved 19th-century buildings remain, eg, the neoclassical Lanark County Courthouse (1843) and the Hotel Imperial, built before 1850 and still in use. Many stone residences were also built during this time, including neoclassical Matheson House (1840), now a national historic site (1966), and "Ontario cottage" style Inge-va (1823). In 1833 one of the last fatal DUELS in Canada was fought in Perth.