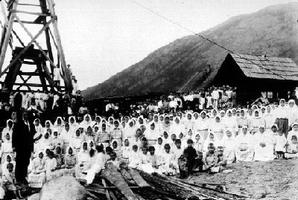 Peter Veregin, surrounded by members of his sect after their move to Brillant, BC in 1907 (courtesy United Church Archives)
PreviousNext

Peter Vasilevich Verigin, also Veregin, religious leader (b at Slavyanka, Russia 29 June 1859; d near Grand Forks, BC 29 Oct 1924). He became leader of the pacifist Russian sect of DOUKHOBORS in 1886 and in 1887 was exiled to Siberia. Influenced by the doctrines of the Christian anarchist novelist, Leo Tolstoi, he clandestinely instructed his followers to abandon meat and alcohol and to resume their historic resistance to military service. Persecution resulted, many Doukhobors were exiled in inhumane conditions to Georgia, Russia and, in 1898-99, more than 7000 were admitted to Canada. Verigin followed in 1903. He encouraged his people not to take the oath of allegiance required by the government to secure the land granted to them. When Doukhobor farms were seized, he led his followers, the Christian Community of Universal Brotherhood, to the Kootenay area of BC where, on purchased land, he attempted to create a self-supporting, self-governing commune.

An able organizer, he placed the community on a good economic footing, but he struggled with the authorities over such matters as compulsory education. Verigin died in a train explosion of undetermined cause. After his death, the Christian Community fell into financial and organizational disarray. Verigin's powerful and imaginative personality had enabled the Doukhobors to weather their difficult first decades in Canada and to retain their special identity as a sect of Christian pacifist communists.