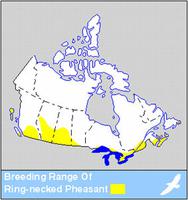 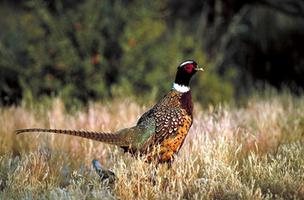 Pheasant is the common name of birds in the family Phasianidae. They are related to other species of fowls which include grouse, turkeys, quails and the red jungle fowl (Gallus gallus), presumed ancestor of all domestic poultry.

Pheasants are henlike in form, some with sharp spurs on their longish, strong legs. Their plumage ranges from metallic blue, green and burnished copper to cryptic patterns of browns, greys and black. Coloured wattles (fleshy protuberances) or vivid, bare skin adorn the head, and the tail may be highly modified for display, most notably in the peafowl (genus Pavo).

Many species may be bred in captivity; wide-scale introductions outside their native habitats (Asia and Japan) have occurred. Hence, some species may survive although destruction of their habitats threatens extinction. Of the 48 pheasant species, at least 16 are endangered. In Canada, the introduced ring-necked pheasant (Phasianus colchicus) is a permanent resident. It is most successful in milder areas, notably southern Ontario and BC.