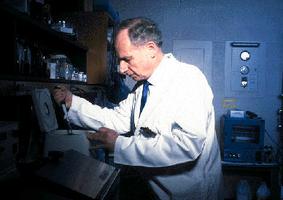 Leading researcher on the effects of drugs on the brain and dopamine (courtesy Maclean's)..

Philip Seeman, molecular neuropharmacologist, educator (b at Winnipeg 8 Feb 1934), married to Mary Violette SEEMAN. Educated at McGill and Rockefeller U, he has studied the structure and function of the plasma membrane at the surface of animal cells. His special interest is in neurologically active compounds, their interaction with receptors on the periphery of nerve cells, and their effect on human behaviour and mood.

Seeman's major scientific discoveries concern the nerve cell receptor for the neurohormone L-dopamine, whose aberrant function is manifest in one or more forms of Parkinsonism. The studies of Seeman and coworkers of the interaction of L-dopamine, its analogues and its antagonists with nerve cell membranes have brought a rational basis to the understanding and treatment of Parkinson's disease and other illnesses that derive from faulty neurohormone function.

Seeman was head of the dept of pharmacology, U of T, 1977-87. His publications include the text Principles of Medical Pharmacology (1976).