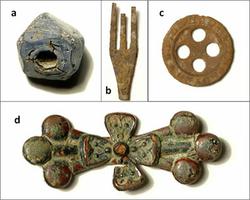 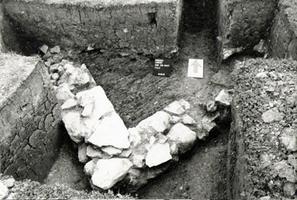 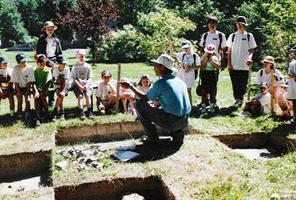 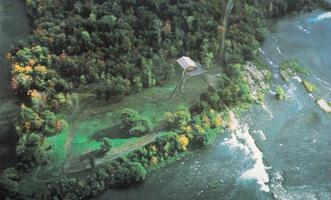 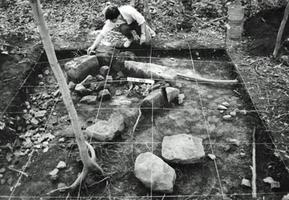 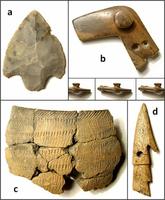 Pointe-du-Buisson is a small point of land (21 ha) extending into the waters of Lake St Louis (a widening of the St-Lawrence River) at the convergence of the Ottawa River. Surrounded by rapids that are impossible to cross by boat, Pointe-du-Buisson was visited regularly by Precontact Indigenous populations who had to portage there. For the past 5000 years, human groups have used the place for short halts, summer camping, fishing and later, for holidays.

The first populations lived in the area 5000 years BP (before present, an archaeological time scale that begins at 1950). These first people who left traces on Pointe-du-Buisson's soil were rather discrete. About 10 artifacts only (mostly stone projectile points) show evidence of their passage. It is known that they hunted and perhaps also fished during their short halts.

Pointe-du-Buisson was occupied on a more continuous basis during the period known as the "Post-Laurentian Archaic." A multifamily house with three hearths was built and occupied for a few weeks. Hunting, fishing and gathering were important activities. Similarities between material from Pointe-du-Buisson and from the Great Lakes region and the State of New York point to extended trading networks. The Mont Royal hornfels, a fine-grained metamorphic rock, was the preferred material of the flintknappers who occupied Pointe-du-Buisson during this period.

About 3000 years ago, a human group cremated and buried the deceased at Pointe-du-Buisson. About 10 individuals were buried in pits covered with large stone slabs. Many funerary offerings accompanied the dead on their last journey: bird-shaped stones, gorgets (ornamental collars), cache blades, stone pearl, pottery shards, etc. Cultural goods and ideas still widely travelled through a vast network of interaction.

Although many groups visited Pointe-du-Buisson during the period known as the "Early Middle Woodland," they did not leave remains (middens, housing structures, etc.) suggesting that they occupied the site on a long-term basis. Nevertheless, this period is marked by the abundance of a characteristic pottery, richly decorated using specific tools and methods. This diagnostic pottery and the other less known items from this precontact period are found in large quantities on different sites at Pointe-du-Buisson, and they are currently being studied.

During this period, an increase in sedentary settlement is observed in Québec, and more particularly at Pointe-du-Buisson. In fact, archaeologists discovered several important middens at Pointe-du-Buisson, showing that people sought to lay out the place in order to live there on a long-term basis. They focused mainly on aquatic resources, which were always plentiful. Since they travelled less, the populations started to be increasingly distinct from one another. This is notable in the apparition of a particular style of pottery from the Melocheville Tradition, which was identified for the first time at Pointe-du-Buisson.

Archaeological excavations unearthed a few fishing camps dating from what is known as the "Early Woodland Period." These camps were occupied by the St. Lawrence Iroquoians, an Indigenous nation that no longer exists. These groups most probably lived in villages nearby and came to Pointe-du-Buisson in order to take advantage of the fish, which were plentiful at the site for a few weeks during the summer.

The Pointe-du-Buisson site continued to be occupied even after the arrival of Europeans in the region. At first, the coureurs des bois, the militaries (including Frontenac), and the Missionaries stopped there repeatedly to avoid the major rapids. Archaeologists also found the remains of a fishing cottage built during the 19th century by the Ellice family, seigneurs of Beauharnois. Trading beads, Jesuit rings, cooking utensils, plaster pipes, etc. all provide information about life at Pointe-du-Buisson during the historic period, which was rich in events.

Presentation of the Site

In 1986, an interpretation centre was opened at Pointe-du-Buisson, which was later to become the Pointe-du-Buisson/Musée québécois d'archéologie. The museum endeavours to provide an ever-growing audience with an opportunity to discover and appreciate Québec's archaeology.

With an imposing artifact collection, several archaeological sites, a bibliography comprising several hundred works and an exceptional museum, Pointe-du-Buisson is a beacon of research, education and diffusion about Québec's archaeology. Its significance was acknowledged in 2006, when the site was designated a National Historic Site.